From Infogalactic: the planetary knowledge core
Jump to: navigation, search
Not to be confused with supreme god, which may also refer to kings of the gods.

Supreme Being is a term for God[1] used by theologians and philosophers of many religious faiths, including Christianity, Islam,[2] Hinduism,[3] Judaism, and deism.[4] 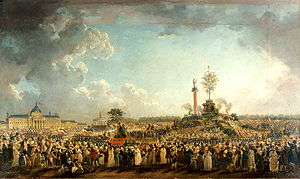 Festival of the Supreme Being, 8 June 1794 Paris

Deists use the term Supreme Being to refer to the Godly. Following the French Revolution, the Cult of the Supreme Being was intended to become the state religion of the new French Republic.[6]

Islamic scholars have used the term Supreme Being to refer to Allah, Arabic for "The God".[10]

The holy scripture of the Sikhs, Guru Granth Sahib, uses terms that are sometimes translated as "Supreme Being".[citation needed] Sikhs personally use Waheguru, or the term Ik Onkar, meaning "One God."