From Infogalactic: the planetary knowledge core
Jump to: navigation, search
Not to be confused with Supreme Headquarters Allied Powers Europe.

Supreme Headquarters Allied Expeditionary Force (SHAEF; /ˈʃeɪf/ SHAYF), was the headquarters of the Commander of Allied forces in north west Europe, from late 1943 until the end of World War II. U.S. General Dwight D. Eisenhower was in command of SHAEF throughout its existence. The position itself shares a common lineage with Supreme Allied Commander Europe and Atlantic, but they are different titles.

History during the Second World War

Eisenhower transferred from command of the Mediterranean Theater of Operations to command SHAEF, which was formed in Camp Griffiss, Bushy Park, Teddington, London, from December 1943; an adjacent street named Shaef Way remains to this day. Southwick House was used as an alternative headquarters near Portsmouth. Its staff took the outline plan for Operation Overlord created by Lieutenant General Sir Frederick E. Morgan, COSSAC (Chief of Staff to the Supreme Commander Allied Forces), and Major General Ray Barker.[1] Morgan, who had been appointed chief of staff to the Supreme Allied Commander (designate) in mid-March 1943 began planning for the invasion of Europe before Eisenhower's appointment.[2] and moulded it into the final version, which was executed on 6 June 1944. That process was shaped by Eisenhower and the land forces commander for the initial part of the invasion, General Sir Bernard Law Montgomery.

SHAEF remained in the United Kingdom until sufficient forces were ashore to justify its transfer to France.[3] At that point, Montgomery ceased to command all land forces but continued as Commander in Chief of the British 21st Army Group (21 AG) on the eastern wing of the Normandy bridgehead. The American 12th Army Group (12 AG) commanded by Lieutenant General Omar Bradley was created as the western wing of the bridgehead. As the breakout from Normandy took place, the Allies launched the invasion of southern France on 15 August 1944 with the American 6th Army Group (6 AG) under the command of Lieutenant General Jacob L. Devers. During the invasion of southern France, the 6 AG was under the command of the Allied Forces Headquarters (AFHQ) of the Mediterranean Theatre of Operations, but after one month command passed to SHAEF. By this time the three Army Groups had taken up the positions on the Western Front in which they would remain until the end of the war—the British 21 AG to the North, the American 12 AG in the middle and the 6 AG to the South. By December 1944, SHAEF had established itself in the Trianon Palace Hotel in Versailles, France.[4] On February it moves to Rheims and 26 April 1945 SHAEF moved to Frankfurt.[5]

SHAEF commanded the largest number of formations ever committed to one operation on the Western Front, with American, French army of liberation, British and Canadian Army forces. It had three Army Groups under its command, which controlled a total of eight field armies; 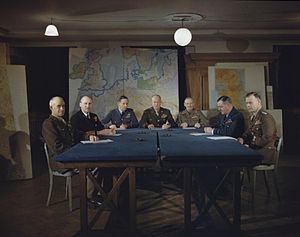 After the surrender of Germany, SHAEF was dissolved on 14 July 1945 and, with respect to the US forces, was replaced by US Forces, European Theater (USFET).[5] USFET was reorganized as EUCOM (European Command, not to be confused with the present-day United States European Command) on 15 March 1947.[5][7]