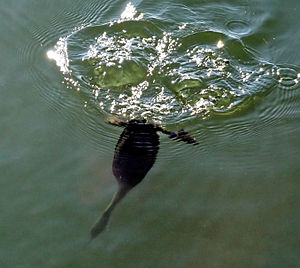 In physics, a surface wave is a mechanical wave that propagates along the interface between differing media, usually as a gravity wave between two fluids with different densities. A surface wave can also be an elastic (or a seismic) wave, such as with a Rayleigh or Love wave. It can also be an electromagnetic wave guided by a refractive index gradient. In radio transmission, a ground wave is a surface wave that propagates close to the surface of the Earth.[1]

In seismology, several types of surface waves are encountered. Surface waves, in this mechanical sense, are commonly known as either Love waves (L waves) or Rayleigh waves. A seismic wave is a wave that travels through the Earth, often as the result of an earthquake or explosion. Love waves have transverse motion (movement is perpendicular to the direction of travel, like light waves), whereas Rayleigh waves have both longitudinal (movement parallel to the direction of travel, like sound waves) and transverse motion. Seismic waves are studied by seismologists and measured by a seismograph or seismometer. Surface waves span a wide frequency range, and the period of waves that are most damaging is usually 10 seconds or longer. Surface waves can travel around the globe many times from the largest earthquakes. Surface waves are caused when P waves and S waves come to the surface.

The term "surface wave" can describe waves over an ocean, even when they are approximated by Airy functions and are more properly called creeping waves. Examples are the waves at the surface of water and air (ocean surface waves), or ripples in the sand at the interface with water or air. Another example is internal waves, which can be transmitted along the interface of two water masses of different densities.

Ground waves refer to the propagation of radio waves parallel to and adjacent to the surface of the Earth, following the curvature of the Earth. These surface waves are also known loosely as the Norton surface wave, the Zenneck surface wave,[2] Sommerfeld waves, and gliding waves. See also Dyakonov surface waves (DSW) propagating at the interface of transparent materials with different symmetry.[3]

Lower frequencies, below 3 MHz, travel efficiently as ground waves. This is because they are more strongly diffracted around obstacles due to their long wavelengths, allowing them to follow the Earth's curvature. The Earth has one refractive index and the atmosphere has another, thus constituting an interface that supports the surface wave transmission. Ground waves propagate in vertical polarization, with their magnetic field horizontal and electric field (close to) vertical. At VLF, the Ionosphere and earth's surface act as a waveguide.

Conductivity of the surface affects the propagation of ground waves, with more conductive surfaces such as sea water providing better propagation.[4] Increasing the conductivity in a surface results in less dissipation.[5] The refractive indices are subject to spatial and temporal changes. Since the ground is not a perfect electrical conductor, ground waves are attenuated as they follow the earth’s surface. The wavefronts initially are vertical, but the ground, acting as a lossy dielectric, causes the wave to tilt forward as it travels. This directs some of the energy into the earth where it is dissipated,[6] so that the signal decreases exponentially.

Most long-distance low frequency (LF) "longwave" radio communication (between 30 kHz and 300 kHz) is a result of groundwave propagation. Mediumwave radio transmissions (frequencies between 300 kHz and 3000 kHz), including AM broadcast band, travel both as groundwaves and, for longer distances at night, as skywaves. Ground losses become lower at lower frequencies, greatly increasing the coverage of AM stations using the lower end of the band. The VLF and LF frequencies are mostly used for military communications, especially with ships and submarines. The lower the frequency the better the waves penetrate sea water. Even extremely low frequency waves (below 3 kHz) have been used to communicate with deeply submerged submarines.

Surface waves have been used in over-the-horizon radar, which operates mainly at frequencies between 2 and 20 MHz over the sea, which has a sufficiently high conductivity to convey the surface waves to and from a reasonable distance (up to 100 km or more; over-horizon radar also uses skywave propagation at much greater distances). In the development of radio, surface waves were used extensively. Early commercial and professional radio services relied exclusively on long wave, low frequencies and ground-wave propagation. To prevent interference with these services, amateur and experimental transmitters were restricted to the higher (HF) frequencies, felt to be useless since their ground-wave range was limited. Upon discovery of the other propagation modes possible at medium wave and short wave frequencies, the advantages of HF for commercial and military purposes became apparent. Amateur experimentation was then confined only to authorized frequencies in the range.

Mediumwave and shortwave reflect off the ionosphere at night, which is known as skywave. During daylight hours, the lower "D" layer of the ionosphere forms and absorbs lower frequency energy. This prevents skywave propagation from being very effective on mediumwave frequencies in daylight hours. At night, when the "D" layer dissipates, mediumwave transmissions travel better by skywave. Ground waves do not include ionospheric and tropospheric waves.

The propagation of sound waves through the ground taking advantage of the earths ability to more efficiently transmit low frequency is known as Audio ground wave (AGW).

Characteristics and utilizations of the electrical surface wave phenomenon include: