Upon independence in 1975, the Military of Suriname was turned into the Surinaamse Krijgsmacht (SKM):, Surinamese Armed Forces. On February 25, 1980, a group of 16 junior SKM officers overthrew the Government. Subsequently the SKM was rebranded as Nationaal Leger (NL), National Army. 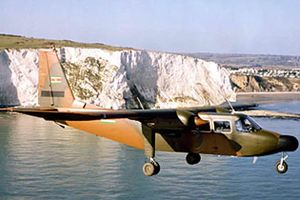 One of 4 delivered Britten-Norman BN-2A Islander of Suriname

In 1982 a small air arm was formed within the Suriname defense force called "Surinaamse Luchtmacht" in short also called LUMA. The first military aircraft of the young air force was a Hughes 500 - Model 369D helicopter, simply registered SAF-100 and being used for light observation tasks. Unfortunately the aircraft was written off in March 1982 killing all four occupants,[1] but from May of the same year the Suriname Air Force was being equipped with four (Pilatus) Britten Norman BN-2B Defenders. Registered with the numbers SAF-001, SAF-002, SAF-003 and SAF-004. Later on during the decade a Cessna 172 Skyhawk (SAF-007), a Cessna 206 (SAF-200) and in 1993 a Cessna T303 Crusader (SAF-008) was acquired. The first official Surinam Air Force Commander from 1983 until 1989 was air force pilot lieutenant Eddie Alenso Savalie Djoe. He was one of the passenger victims of the Surinam Airways Flight 764 accident in June 1989, by then he was already promoted to the rank of Major.

Expansion and activity against the Jungle Commando

All aircraft of the Surinam Air Force undertake border patrols, utility transport and SAR (Search & Rescue) missions from the main base at Paramaribo - Zorg en Hoop and are occasionally detached to Zanderij - Johan Adolf Pengel International Airport, Nieuw Nickerie - Major Fernandes Airfield, Albina Airstrip and Moengo Airstrip. In 1986 anti-government guerrilla activity from the Jungle Commando, headed by Ronnie Brunswijk prompted the government to acquire a pair of Aérospatiale SA.316B Alouette III (SAF-400 & SAF-500) helicopters from the Portuguese Air Force (Portuguese: Força Aérea Portuguesa), formerly registered FAP9350 & FAP9386. In the same year also three Pilatus PC-7's (SAF-111, SAF-112 & SAF-113) were ordered in Switzerland for COIN (Counter-Insurgency) missions. One of the Alouette's crashed and both delivered PC-7s were returned to Switzerland but one was later re-delivered. In 1987 a Bell 205 Iroquois (SAF-300) was acquired from Venezuela and used as a gunship for five years prior to sale to the US as N6594S in 1991. It made a crash in July 1987[2] due to a mechanical failure killing the American pilot Billy Pearson, seriously injuring the American mechanic and four other Surinamese crewmembers.[3] The helicopter was later repaired and back in action. 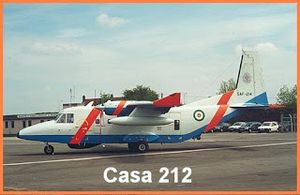 Two CASA 212-400s Aviocar transports (SAF-212 & SAF-214) Garret AiResearch TPE331-10HR turbo-prop engined aircraft were delivered in 1999 during the presidency of Jules Wijdenbosch. One of these two Spanish built CASA 212-400's was a Maritime Patrol Aircraft version (SAF-214) which was modified for the maritime patrol role with a Bendix RDR-1500 surveillance radar.[4] These two aircraft were bought for patrol & transport duties, fishery protection along the sea border and anti narcotics government activities.[5] In 1999 Colonel Etienne Boerenveen, at that time Defence Chief of Staff of Suriname, received the keys to the aircraft from the Spanish San Pablo Plant Manager of EADS CASA, Mr. Rafael González-Ripoll, following the signing of a protocol.[6] Lack of spares and funding has however hampered maintenance and sometimes grounding much of the SAF fleet. In 2012 six experts from Venezuela made an assessment for the Suriname Air Force on the rehabilitation of the Casa 212 airplanes and now the Suriname Air Force has sold them to Fayard Enterprises in the USA.

Three single engined Indian HAL Chetak helicopters were ordered in 2009.[7] In a deal worth US$13.4 million with Hindustan Aeronautics Limited [HAL], facilitated through a line of credit from India. The deal was previous rumoured to include the more modern twin engined HAL Dhruv helicopters, but this proved to be wrong.[8] [9] On 26 December 2012 ten technical personnel of the Suriname Air Force left to India to be trained to become certified helicopter mechanics.[10] In 2014 eight helicopter pilots from the Suriname Air Force were trained on operating the HAL Chetak helicopters in Bangalore, India.[11] In 2014 it was announced that Suriname's order for helicopters from India was in fact for HAL Chetak and not the HAL Dhruv even as the Chetak production line is planned to be shut down. So rumours aside by the end of January 2015 the three Indian Chetak helicopters were assembled and delivered in Suriname as SAF-H001 (c/n AH-350), SAF-H002 (c/n AH-351) & SAF-H003 (c/n AH-352).[12][13] These registrations later changed to SAF-153, SAF-303 and SAF-811 when operational training started. The plan is to have one helicopter each based at the city of Paramaribo (Zorg en Hoop Airport), Nickerie (Majoor Henry Fernandes Airport) and Albina (Albina Airstrip).[14] Finally on 13 March 2015 the helicopter fleet of three Chetaks was officially handed over by the Indian ambassador Subashini Murgesan to the Minister of Defence of Suriname Lamuré Latour with a nice ceremony some inaugural flights were made over airport Zorg en Hoop to restart SAF operations again.[15][16] On the same day and occasion the Minister announced that a de Havilland Canada DHC-6 Twin Otter was about to strengthen the airfleet of the Suriname Air Force shortly with pilots already in training.

Beneath the President and Minister of Defense is the Commander of the Armed Forces (Bevelhebber van de Strijdkrachten), Colonel Hedwig Gilaard, whose headquarters is in Paramaribo, was followed-up after three years by Colonel Ronni Benschop, who in turn was promoted to Brigade General in February 2014. This is the highest-ranked officer in the Armed Forces of Suriname ever.[18][19]

Commanding officers of the Suriname Armed Forces at present

* Lieutenant Colonel Robert Kartodikromo is the Commander of the Air Force