Surya (/ˈsʊərjə/[citation needed]; Sanskrit: सूर्य sūrya, also known as Aditya, Bhanu or Ravi Vivasvana in Sanskrit, and in Avestan Vivanhant, is the chief solar deity in Hinduism and generally refers to the Sun in Nepal and India.[2][3]

Surya is the chief of the Navagraha, the nine Classical planets and important elements of Hindu astrology. He is often depicted riding a chariot harnessed by seven horses[1] which might represent the seven colors of the rainbow or the seven chakras in the body. He is also the presiding deity of Sunday. Surya is regarded as the Supreme Deity by Saura sect and Smartas worship him as one of the five primary forms of God. The Sun god, Zun, worshipped by the Afghan Zunbil dynasty, is thought to be synonymous with Surya.

"Arka" form is worshiped mostly in North India and Eastern parts of India. The temples dedicated to the "Arka" form of Surya are Konark Temple in Orissa, Uttararka and Lolarka in Uttar Pradesh, and Balarka in Rajasthan. There was an old sun temple in Bahraich, Uttar Pradesh named Balarka Surya Mandir, built by King Tilokchand Arkawanshi in early 10th century AD which was destroyed in the 14th century during the Turkish invasions. The Surya temple in Konark was built by Ganga Vamsi king Narasimha Dev. Sun Temple, Modhera in Gujarat was built in 1026 AD by King Bhimdev of Solanki dynasty.

Surya is also known as "Mitra" for his life nourishing properties. The Mitra form of 'Surya' had been worshiped mostly in Gujarat, where a clan of Suryawanshi kings was known as Mitrawanshi kshatriyas, also known by its derivative name "Maitrakas". 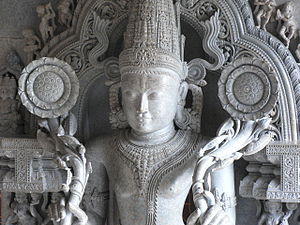 Surya had three wives: Sarayu Or Saranyu, Ragyi and Prabha. Saranyu was the mother of Vaivasvata Manu (the seventh, i.e., present Manu) and the twins Yama and his sister Yami. She also bore him the twins known as the Ashvins, divine horsemen and physicians to the Devas. Saranyu, being unable to bear the extreme radiance of Surya, created a superficial entity from her shadow called Chhaya and instructed her to act as Surya's wife in her absence. Chhaya mothered two sons Savarni Manu and Shani, and two daughters, Tapti and Vishti.[4] He has two more sons, Revanta with Ragyi, and Prabhata with Prabha. Surya is the father of the famous tragic hero Karna, described in the Indian epic Mahabharata, by a human princess named Kunti.

Like some other deities, such as Shiva (who are worshiped by saints, normal worshipers and demons), Surya has a following of the same types of beings. A group of Raksasas known as Yatudhanas were the followers of Surya and wandered with him.[6] It is mentioned that Bhauvana the Daitya offered a prayer to Surya with the Rathantara saman and was immediately turned into an elephant.[6]

In the Ramayana, Surya is described as father of the King Sugriva, who helped Rama and Lakshmana in defeating the demon king Ravana. He also trains Hanuman. The Suryavanshi dynasty of kings, Rama from ketu planet being one of them, also claims descent from Surya.Eastern kingdom of mahabharta and ramayana are called to be of Surya's potential.

In the Mahabharata, Princess Kunti receives instruction for a mantra from the sage Durvasa; by reciting which, she would be able to summon any god and bear a child by him. Incredulous of the power of this mantra, Kunti unwillingly tests it on Surya, but when Surya appears, she gets scared and requests him to go back. However, Surya has an obligation to fulfill the mantra before returning. Surya miraculously causes Kunti to bear the child immediately whilst retaining her virginity so that she, as an unmarried princess, need not face any embarrassment or be subjected to questions from society. Kunti feels compelled to abandon the child, Karna, who grows up to become one of the central characters in the great battle of Kurukshetra.

In the Vedas, Surya is frequently referred to as "the eye of Mitra, Varuna, and Agni". Lord Surya is also considered to be the eye of the Virat Purusha.

In Vedic astrology Surya is considered a mild malefic on account of his hot, dry nature. Surya represents soul, will-power, fame, the eyes, general vitality, courage, kingship, father, highly placed persons and benevolence and friendly . He is exalted in the sign Mesha, is in mulatrikona in the sign Simha and is in debilitation in the sign Tula. Surya is lord of three nakshatras or lunar mansions: Krittika, Uttara Phalguni and Uttara Ashadha. Surya has the following associations: the colors – copper or red, the metals – gold or brass, the gemstone – ruby. The food grain associated with him is wheat.

In the Buddhism of the Far East, Surya is one of the twelve Devas, as guardian deities, who are found in or around Buddhist shrines (Jūni-ten, 十二天).[7] In Japan, he has been called "Nit-ten".[8] He joins these other eleven Devas of Buddhism, found in Japan and other parts of southeast Asia: Indra (Taishaku-ten), Agni (Ka-ten), Yama (Emma-ten), Nirrti (Rasetsu-ten), Vayu (Fu-ten), Ishana (Ishana-ten), Kubera (Tamon-ten), Varuna (Sui-ten), Brahma (Bon-ten), Prithvi (Chi-ten), Chandra (Gat-ten).[9][8][10] 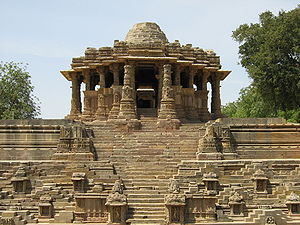 There are Surya temples all across India. The most famous is the World Heritage Site of the Sun Temple, Konark, Orissa. Besides Konark, there are two other sun temples in Orissa called Biranchi Narayan Sun Temple[12] in Buguda, Ganjam District and Biranchinarayan Temple, Palia, Bhadrak.

There are sun temples in Modhera, Gujarat, created by King Bhimdev of the Solanki dynasty, in Arasavalli, Andhra Pradesh, Kanakaditya Temple in Kasheli (Dist. Sindhudurg) – Maharashtra, near the famous Galtaji's temple in Jaipur, Rajasthan and in clusters of Navagraha temples in Tamil Nadu and Assam. The Sun Temple at Martand in Jammu and Kashmir and Sun Temple of Multan are temples which were destroyed. The only and the famous Surya temple in northern India is Kattarmal surya mandir in Almora District, Uttarakhand created by King Kattarmal in the 12th century.

The Gurjars were essentially sun worshipers and some of the sun temples were erected by them during the medieval period.[13] The sun temple known as Jayaditya was constructed by Gurjar king of Nandipuri, Jayabhatta II. This temple is situated at Kotipura near Kapika in the Bharukachha district.[14] The Surya temple of Bhinmal known as Jagaswami Surya temple was also erected during this period.[15]

There are festivals dedicated to Sun God Surya in India.

Pongal or Makara Sankaranti is the most widely celebrated Hindu festival dedicated to the Sun God. It is celebrated as Makara Sankranti in many parts of India and as Pongal by Tamils all over the world. People thank the Sun God for ensuring a good harvest and dedicate the first grain to him.

Chhath is another Hindu festival dedicated to Surya. It is believed to be started by Karna, the son of Surya, who became a great warrior and fought against the Pandavas in the Kurukshetra War. Chhath is unique to Bihar, Jharkhand, and some parts of Uttar Pradesh and Nepal.

Samba Dashami is celebrated in the eastern coastal state of Odisha in the honour of Samba, the son of Krishna who was cured of leprosy by praying to Surya.

Ratha Saptami is a Hindu festival that falls on the seventh day of the bright half of the Hindu month Maagha.[16] This day is also known as Surya Jayanti because it celebrates the power of the Sun God.

Women in Goa observe Aytar Puja on Sundays of the Hindu lunar month of Shravana.[17] Known as Aditya Vrata in Sanskrit, this observance is known as Aditya Ranubai in Maharashtra.[18] Aditya and his consort Rajni are invoked on these days. 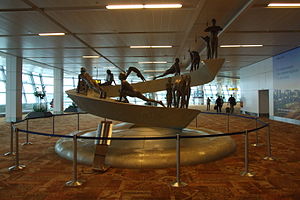 A well-known Hindu mode of worship of the devotional movements of Surya is done at the rising of the Sun, known as Sūrya namaskāra (sun salutation). Ten yogic postures are assumed in successive flowing movements to complete one namaskar. Twelve sacred Hindu mantras uttered and for each mantra one complete namaskar is done. Ancient practice is to do 108 namaskaras a day. It is considered most auspicious by Hindus to do this.

The 13 mantras for surya namaskara: 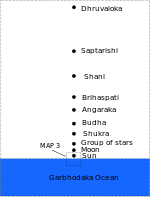