Svaneti or Svanetia (Suania in ancient sources) (Georgian: სვანეთი Svaneti) is a historic province in Georgia, in the northwestern part of the country. It is inhabited by the Svans, an ethnic subgroup of Georgians. 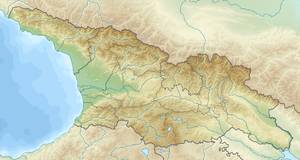 Tbilisi
The two valleys of Svaneti

= Kodori valley which also has a Svan population

They are separated by the Svaneti Range which is almost as high as the main Caucasus range. Historical Svaneti also included the Kodori Gorge in the adjoining rebel province of Abkhazia, and part of the adjacent river valleys of Kuban and Baksan north of the crest of the Caucasus. Writing in 1848, Bodenstedt said that Upper Svaneti could only be reached by a difficult footpath which was closed in winter[1] 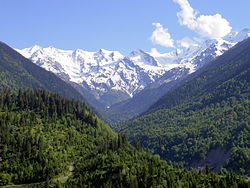 View of the Caucasus Mountains in Svaneti.

The landscape of Svaneti is dominated by mountains that are separated by deep gorges. Most of the region which lies below 1,800 meters (5,904 ft) above sea level is covered by mixed and coniferous forests. The forest zone is made up of tree species such as spruce, fir, beech, oak, and hornbeam. Other species that are less common but may still be found in some areas include chestnut, birch, maple, pine and box. The zone which extends from 1,800 meters to roughly about 3,000 meters (5,904–9,840 ft) above sea level consists of alpine meadows and grasslands. Eternal snows and glaciers take over in areas that are over 3,000 meters above sea level. The region is notable for its glaciers and picturesque summits. Svaneti's signature peak is probably Mount Ushba which towers over the Inguri Gorge and can be seen from many parts of the region.

The climate of Svaneti is humid and is influenced by the air masses coming in from the Black Sea throughout the year. Average temperatures and precipitation vary considerably with elevation. Annual precipitation ranges between 1000 and 3200 mm (39 and 126 inches). The highest amount of precipitation falls on the Greater Caucasus Mountains. The region is characterized by very heavy snowfall in the winter and avalanches are a frequent occurrence. Snow cover may reach 5 meters (16.4 feet) in some areas. In general, the lowest regions of Svaneti (800–1200 meters / 2624–3936 feet above sea level) are characterized by long, warm summers and relatively cold and snowy winters. Middle altitudes (1200–1800 meters above sea level) experience relatively warm summers and cold winters. Areas above 2000 meters above sea level lie within a zone that experiences short, cool summers (less than 3 months) and long and cold winters. Large parts of Svaneti lie above 3000 meters (9840 feet) above sea level, a zone which does not have a real summer. Due to Svaneti's close proximity to the Black Sea, the region is spared from the extremely cold winter temperatures that are characteristic of high mountains. 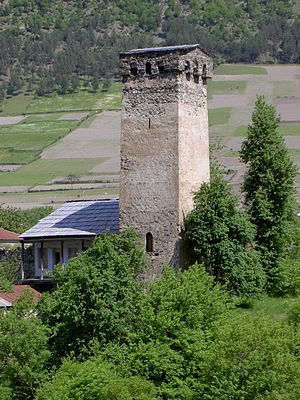 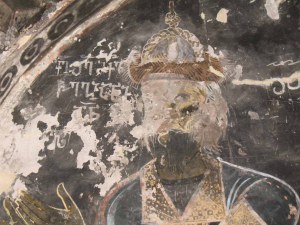 An 11th-century fresco of the Svan nobleman Mikael Chagiani from Adishi.

The Svans are usually identified with the Soanes mentioned by Greek geographer Strabo, who placed them more or less in the area still occupied by the modern-day Svans. The province had been a dependency of Colchis, and of its successor kingdom of Lazica (Egrisi) until AD 552, when the Svans took advantage of the Lazic War, repudiated this connection and went over to the Persians. The Byzantines wanted the region, for if they secured its passes, they could prevent Persian raids on the border areas of Lazica. With the end of the war (562), Svanetia again became part of Lazica. Then, the province joined the Kingdom of Abkhazia to form a unified monarchy which was incorporated into the Kingdom of Georgia in the early 11th century. Svanetia became a duchy (saeristavo) within it, governed by a duke (eristavi). The province’s Orthodox culture flourished particularly during the Georgian “golden age” under Queen Tamar (r. 1184-1213), who was respected almost as goddess by the Svanetians. The legend has it that the duchy was annually visited by Tamar. The Svans had been known as fierce warriors for centuries. Their inflatable war banner was named Lemi (Lion) because of its shape.

The marauding Mongols never reached Svanetia and, for a time, the region became a cultural safe house. Following the final disintegration of the Kingdom of Georgia in the 1460s, fighting broke out for controlling the province. Part of Upper Svanetia formed an independent principality under the Princes Dadeshkeliani, a branch of the Gelovani family, while Lower Svanetia, originally ruled by the Princes Gelovani, was temporarily usurped and subdued by the Mingrelian princes Dadiani. Facing serious internal conflict, Prince Tsioq’ Dadeshkeliani of Svanetia signed a treaty of protectorate with the Russian Empire on November 26, 1833. Difficult to access, the region retained significant autonomy until 1857, when Russia took advantage of the dynastic feud in Svanetia and effectively abolished the principality’s autonomy. In 1875, the Russians toughened their rule by imposing additional taxes. Protests ensued, and Russia deployed troops against the province. Despite having suffered heavy losses, the Russian army units eventually crushed the rebels burning their stronghold Khalde to the ground in 1876.

Part of the Russian governorate of Kutais, Svanetia was divided into two raions (districts) — Mestia (former Sethi) and Lentekhi — under the Soviet rule. The unsuccessful anti-Soviet Svanetian Uprising took place in the region in 1921. 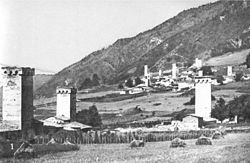 In 1987, avalanches destroyed several homes and killed seventy, mostly school children. In the aftermath the Central Committee of the Communist Party of the Soviet Union and the Council of Ministers of the Soviet Union passed a decree to resettle some 2,500 families to districts of eastern Georgia (eco-migration to Marneuli, Tetritskaro, Bolnisi, Sagarejo, Gardabani, Dmanisi, Kaspi,Tskaltubo, Khoni, Ozurgeti, and Lanchkhuti rayons).[2] The end of the Soviet Union and subsequent Georgian Civil War created severe socioeconomic problems in the region. While the Svanetian population resisted the unpleasant conditions of the high mountain environment they lived in for centuries, the increasing economic difficulties of the last two decades and frequent natural disasters — floods and landslides as of April 2005 ([2]) have brought about a strong tendency towards migration. The province became a safe haven for criminals threatening local residents and tourists. Large-scale anti-criminal operations carried out by the Georgian Special Forces as of March 2004 ([3]) resulted in significant improvement of the situation.

The historic region of Lower Svaneti in Georgia.

The Svans, the indigenous population of Svanetia, are ethnic subgroup of the Georgians. Until the 1930s, Mingrelians and Svans had their own census grouping, but were classified under the broader category of Georgian thereafter. They are Georgian Orthodox Christians, and were Christianized in the 4th-6th centuries. However, some remnants of old paganism have been maintained. Saint George (known as Jgëræg to the locals), a patron saint of Georgia, is the most respected saint. The Svans have retained many of their old traditions, including blood revenge. Their families are small, and the husband is the head of his family. The Svan really respect the older women in families.[citation needed]

Typically bilingual, they use both Georgian and their own, unwritten Svan language, which together with the Georgian, Mingrelian, and Laz languages constitute the South Caucasian or Kartvelian language family. The Svan language is endangered and is being largely replaced by Georgian.

Svanetia is known for their architectural treasures and picturesque landscapes. The botany of Svanetia is legendary among travelers.[citation needed] The famous Svanetian towers erected mainly in the 9th-12th centuries, make the region’s villages more attractive. In the province are dozens of Georgian orthodox churches and various fortified buildings. Architectural monuments of Upper Svanetia are included in a list of UNESCO World Heritage Sites.

Svan culture survives most wonderfully in its songs and dances. Svanetia boasts the most complex form of Georgian polyphonic singing,[citation needed] traditional to Georgian vocal music.