The Sverdlov-class cruisers, Soviet designation Project 68bis, were the last conventional cruisers built for the Soviet Navy, in the 1950s. They were based on Italian pre-Second World War concepts and designs, but modified to be more seaworthy and able to run fast in the rough waters of the North Atlantic. They also carried an extensive suite of radar gear and anti-aircraft artillery in keeping with other post-war designs.

The Soviets originally planned to build 40 of the class, which would be supported by the Stalingrad-class battlecruisers and aircraft carriers. This represented a significant risk to the Royal Navy, especially in the North Atlantic.[1] They responded by introducing the Blackburn Buccaneer, a strike aircraft that had the performance to attack the Sverdlovs with impunity. The Buccaneer was to be armed with the smaller Red Angel or large Green Cheese missiles.[1] When the building program was cut back and the battlecruisers and carriers were cancelled, the Sverdlovs were left dangerously unprotected outside the cover of land-based aircraft. Operating on their own as commerce raiders they would be extremely vulnerable.[citation needed]

Construction was cancelled by Nikita Khrushchev in 1954 after 14 examples had been completed. Two additional hulls were scrapped on the slip and four partially complete Sverdlovs launched in 1954 but were scrapped in 1959. The remaining fleet remained in service through the 1970s when the underwent a limited modernization program, before finally leaving service in the late 1980s.

Only Mikhail Kutuzov is preserved, in Novorossiysk.

These ships were improved and slightly enlarged versions of the Chapayev class. They had the same main armament, machinery and side protection as the earlier ships, but had increased fuel capacity for greater range, an all welded hull, improved underwater protection, increased anti aircraft artillery and radar. The project was formally approved on 27 May 1947. The first three members of the class were named after cancelled ships of the previous Chapayev class. Initially, 30 ships were ordered, however upon Joseph Stalin's death in 1953, the order was cut to 21 in 1954. Once the first fifteen hulls were laid down, orders that the second batch of six were to be modified for protection against nuclear fallout were sent, however none of the six were completed. Plans were drawn up to upgrade the ships to missile-carrying cruisers, however those plans were dropped and instead new construction was cancelled in 1959, with the incomplete ships being scrapped by 1961.[2]

By the early 1960s, the torpedo tubes aboard the ships were removed. Admiral Nakhimov had an SS-N-1 anti-ship missile launcher installed in place of "A" and "B" turrets as a trial in 1957. This installation was not successful, the ship was rapidly decommissioned and was used as a target ship in 1961.[2]

Dzerzhinsky had a SAM launcher for the SA-2 missile, replacing the aft turrets in 1960-62. This conversion was also not successful and no further ships were converted. As the entire missile installation was above the armored deck and the missile itself, based on the SA-2 "Guideline" was liquid-fueled (acid/kerosene), it would have represented a serious hazard to the ship in action.[2]

Senyavin and Zhdanov were converted into command ships in 1971 by replacing the aft turrets with extra accommodation and electronics. The two command ships were fitted with a helicopter deck and hangar together with a SA-N-4 SAM missile system. Senyavin also had four twin 30 mm guns installed atop the missile system.[2]

Oktyabrskaya Revolyutsia was refitted with an enlarged bridge in 1977, with Admiral Ushakov and Aleksandr Suvorov receiving the same modification in 1979, and later, Mikhail Kutusov.[2]

The standard Soviet practice was to pass the cruisers in and out of reserve. Dzerzhinsky was towed home from the Mediterranean Sea in 1979 after breaking down.[2]

File:Zhdanov.jpg
Zhdanov after conversion to a command cruiser 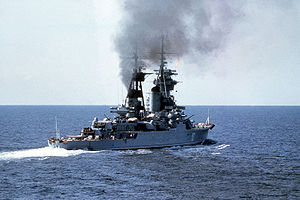