Svishtov (Bulgarian: Свищов, known as Свѣщний / Sveshtniy in old Bulgarian) is a town in northern Bulgaria, located in Veliko Tarnovo Province on the right bank of the Danube river opposite the Romanian town of Zimnicea. It is the administrative centre of the homonymous Svishtov Municipality. With a population of 35,923 inhabitants, as of December 2009,[1][2][3] the town is the second largest in the province after the city of Veliko Tarnovo and before Gorna Oryahovitsa.

Svishtov is situated in northern central Bulgaria on the right bank of the Danube river in its southernmost point, across from Zimnicea, Romania. The town lies 237 km (147.26 mi) north-east of the capital Sofia, and 251 km (155.96 mi) west of the major Black Sea port of Varna. Other important cities in the region are Pleven (80 km) and Ruse (90 km).

The port of Svishtov is the southernmost harbour on the Danube. It is served around the clock by the Svishtov-Zimnich ferry — a regular operation Ro-ro ferryboat across the Danube between Svishtov and Zimnicea. The ferry shortens the road path to and from Turkey to Central and Western Europe by 140 km (86.99 mi) when compared to the traditional route over the Danube Bridge at Ruse-Giurgiu and allows a time gain of nearly 4 hours thus avoiding the traffic in and around the city of Bucharest. 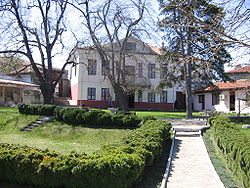 Svishtov is identified with the Roman colony Novae mentioned by Ptolemy.[5] It served as a base of operations for Roman campaigns against Barbarian tribes, last time during Maurice's Balkan campaigns. Svishtov, then the colony Novae, was the residence of St. Lupus of Novae.

For a short time the place was the main city for the Ostrogoths of Theodoric the Great. Theodoric occupied Singidunum in 471 and, after plundering Macedonia and Greece, settled in Novae (the modern Svishtov), on the lower Danube, in 483, where he remained till he transferred the sphere of his activities to Italy ten years later.

It was destroyed some time after 613, as shown by coin founds minted up to this date Svishtov is known as the first town to be liberated during the Russo-Turkish War, 1877-78, since the largest part of the Imperial Russian Army forced the Danube nearby. In January 1878 a correspondent of The Times of London noted that, because of the war, "Sistova does not present its former animated appearance, although there is much more movement here than I expected, . . . with roast turkeys, chickens, and all other delicacies of the season on the bill of fare" of the "numerous restaurants in the town."[6]

On 4 March 1977, Svishtov suffered major structural damage in the Vrancea earthquake, including the collapse of three apartment blocks in which over 100 people were killed.

Svishtov Cove in Livingston Island in the South Shetland Islands, Antarctica is named for the town of Svishtov.

Svishtov has a humid subtropical climate with considerable continental influences. The summer lasts five months, from May to September. Winters start in early December and last until March.

The origins of the name Svishtov can be found in its old Bulgarian variation Sveshtniy (Свѣщний), deriving from the word svesht/svyasht (свѣщ), meaning candle. This was due to the existence of a lighthouse in the city. The previous name Sistova was first mentioned in the treaty after the Austro-Turkish War in 1791, when Bulgaria was still under Ottoman rule. This name was chosen instead of the Turkish word Zigit. During the Ottoman rule of Bulgaria the town was also known as Ziștovi and in Romanian as Șiștova.

The main religion in Svishtov is Eastern Orthodox Christianity. There is also a small group of Roman Catholics that have migrated from the surrounding villages of Oresh, Dragomirovo and the town of Belene,and small group of Muslims.

The main industries in the town of Svishtov include imports and exports via the harbor, electronics, chemical manufacturing, and wheat production. The town's University of Economics is also a major economic draw. Additionally, there are a large number of European tourists, particularly from Romania, who frequent Svishtov because of its relatively lower prices.

One of the most beautiful places around the town of Svishtov is the unique river valley (1 to 2 km (1 to 1 mi) away from the town) which hosts the monastery of Svishtov; the region called Pametnitsite / Паметниците (The Monuments) on the banks of the Danube and the park around the old fortress in the centre the town.

The House-museum of the Bulgarian novelist Aleko Konstantinov is one of the top 100 Tourist Sites of Bulgaria.

Another place of interest in town is the region called Мanastira / Манастира (The monastery) 5 kilometres (3 miles) south-east of the town.

Svishtov is twinned with: