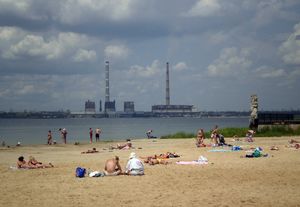 It is an industrial urban-type settlement, built as the home for the Vuhlehirska thermal power plant.

In the War in Donbass (that started in the spring of 2014) the city is near the frontline with the separatists Donetsk People's Republic.[2] Because of the conflict the number of Svitlodarsk residents has shrunk to a few thousand.[2]