From Infogalactic: the planetary knowledge core
Jump to: navigation, search
This article is about the historical region of Germany. For the administrative region (Regierungsbezirk) of Bavaria, see Bavarian Swabia. 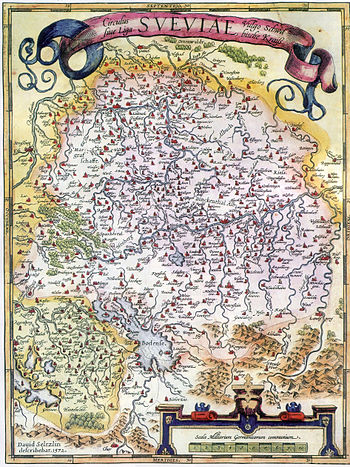 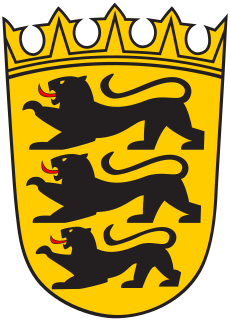 Swabia (/ˈʃweɪbiə/; German: Schwaben, colloquially Schwabenland or Ländle; in English also archaic Suabia or Svebia) is a cultural, historic and linguistic region in southwestern Germany. The name is ultimately derived from the medieval Duchy of Swabia, one of the German stem duchies, representing the territory of Alemannia, whose inhabitants interchangeably were called Alemanni or Suebi.

This territory would include all of the Alemannic German area, but the modern concept of Swabia is more restricted, due to the collapse of the duchy of Swabia in the thirteenth century. Swabia as understood in modern ethnography roughly coincides with the Swabian Circle of the Holy Roman Empire as it stood during the Early Modern period, now divided between the states of Bavaria and Baden-Württemberg.

Swabians (Schwaben, singular Schwabe) are the natives of Swabia and speakers of Swabian German. Their number was estimated at close to 0.8 million by SIL Ethnologue as of 2006, compared to a total population of 7.5 million in the regions of Tübingen, Stuttgart and Bavarian Swabia. 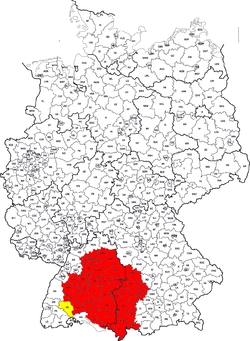 Today's Swabia within modern Germany. The area shaded in red corresponds to the districts of Tübingen, Stuttgart and Bavarian Swabia, to the exclusion of Main-Tauber-Kreis (Stuttgart), and the inclusion of Calw and Freudenstadt (Northern Black Forest), Rottweil and Tuttlingen (Freiburg). Shown in yellow is Schwarzwald-Baar-Kreis, situated at the transitional area between the Swabian, Upper Rhenish and Lake Constance dialects within Alemannic. Historic Swabia included also Baden, the Alsace, the German-speaking Swiss and Vorarlberg. Swabia as marked on this map has a total population of close to 8 million (as of 2012), or roughly 10% of total German population.

Like many cultural regions of Europe, Swabia's borders are not clearly defined. However, today it is normally thought of as comprising the former Swabian Circle, or equivalently the former state of Württemberg (with the Prussian Hohenzollern Province), or the modern districts of Tübingen, Stuttgart, and the administrative region of Bavarian Swabia.

In the Middle Ages, the term Swabia indicated a larger area, covering all the lands associated with the Frankish stem duchy of Alamannia stretching from the Vosges Mountains in the west to the broad Lech river in the east: This also included the region of Alsace and the later Margraviate of Baden on both sides of the Upper Rhine Valley, as well as modern German-speaking Switzerland, the Austrian state of Vorarlberg and the principality of Liechtenstein in the south.[citation needed] 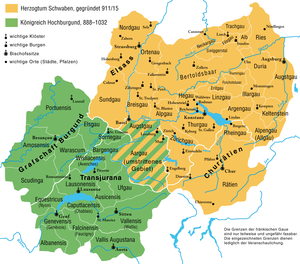 Like all of Southern Germany, Swabia was part of the La Tène culture, and as such has a Celtic substrate. In the Roman era, it was part of the Raetia province. In the third century, it was gradually settled by the Elbe Germanic Suebi and other components that came to make up the Alemanni. The Alemanni were ruled by independent kings throughout the fourth and fifth centuries.[1] By the late fifth century, the area settled by the Alemanni extended to the Alsace and the Swiss Plateau, bordering on the Bavarii to the east, the Franks to the north, the remnants of Roman Gaul to the west, and the Lombards and Goths, united in the Kingdom of Odoacer, to the south.

Main articles: Alamannia, Duchy of Swabia and Dukes of Swabia

Swabia became a duchy under the Frankish Empire in 496, following the Battle of Tolbiac. Swabia was one of the original stem duchies of East Francia, the later Holy Roman Empire, as it developed in the ninth and tenth centuries. Due to the foundation of the important abbeys of St. Gallen and Reichenau, Swabia became an important center of Old High German literary culture during this period.

The Hohenstaufen dynasty (the dynasty of Frederick Barbarossa), which ruled the Holy Roman Empire in the twelfth and thirteenth centuries, arose out of rich Swabia, but following the execution of Conradin, the last Hohenstaufen, on October 29, 1268, the duchy was not reappointed during the Great Interregnum. In the following years the original duchy gradually broke up into many smaller units.

Rudolf I of Habsburg, elected in 1273 as emperor, tried to restore the duchy, but met the opposition of the higher nobility who aimed to limit the power of the emperor. So he confiscated instead the former estates of the Hohenstaufen as imperial property of the Holy Roman Empire, declared most of the cities formerly belonging to Hohenstaufen to be Free Imperial Cities and the more powerful abbeys within the former duchy to be Imperial Abbeys.

Charlemagne's family is known to have hailed from Swabia. The major dynasties that arose out of the region were the Habsburgs and the Hohenzollerns, who rose to prominence in Northern Germany. Also stemming from Swabia are the local dynasties of the dukes of Württemberg and the Margraves of Baden. The Welf family went on to rule in Bavaria and Hanover, and are ancestral to the British Royal Family that has ruled since 1714. Smaller feudal dynasties eventually disappeared, however; for example, branches of the Montforts and Hohenems lived until modern times, and the Fürstenberg survive still. The region proved to be one of the most divided in the empire, containing, in addition to these principalities, numerous free cities, ecclesiastical territories, and fiefdoms of lesser counts and knights.

The territory of Swabia as understood today emerges in the early modern period. It corresponds to the Swabian Circle established in 1512. The Old Swiss Confederacy was de facto independent from Swabia from 1499 as a result of the Swabian War, while the Margraviate of Baden had been detached from Swabia since the twelfth century.

Fearing the power of the greater princes, the cities and smaller secular rulers of Swabia joined to form the Swabian League in the fifteenth century. The League was quite successful, notably expelling the Duke of Württemberg in 1519 and putting in his place a Habsburg governor, but the league broke up a few years later over religious differences inspired by the Reformation, and the Duke of Württemberg was soon restored. 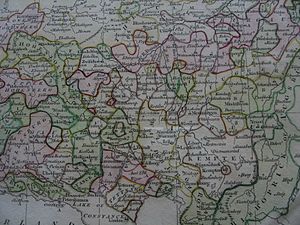 The region was quite divided by the Reformation. While secular princes such as the Duke of Württemberg and the Margrave of Baden-Durlach, as well as most of the Free Cities, became Protestant, the ecclesiastical territories (including the bishoprics of Augsburg, Konstanz and the numerous Imperial abbeys) remained Catholic, as did the territories belonging to the Habsburgs (Further Austria), Hohenzollerns, and the Margrave of Baden-Baden.

In the wake of the territorial reorganization of the empire of 1803 by the Reichsdeputationshauptschluss, the shape of Swabia was entirely changed. All the ecclesiastical estates were secularized, and most of the smaller secular states, and almost all of the free cities, were mediatized, leaving only Württemberg, Baden, and Hohenzollern as sovereign states. Much of Eastern Swabia became part of Bavaria, forming what is now the Swabian administrative region of Bavaria.

The Nazi propaganda film Jud Süß took place in the Kingdom of Württemberg, with the Swabians shown being terrorized by Jews. 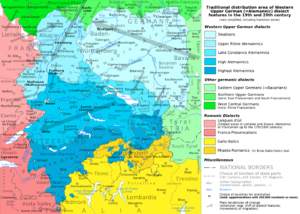 As an ethno-linguistic group, Swabians are closely related to other speakers of Alemannic German, i.e. Badeners, Alsatians, and German-speaking Swiss.[2]

Swabian German is traditionally spoken in the upper Neckar basin (upstream of Heilbronn), along the upper Danube between Tuttlingen and Donauwörth, and on the left bank of the Lech, in an areal centered on the Swabian Alps roughly stretching from Stuttgart to Augsburg.