From Infogalactic: the planetary knowledge core
Jump to: navigation, search
This article is about the administrative region (Regierungsbezirk) of Bavaria. For the greater historical region of Germany, see Swabia.

Swabia (German: Schwaben) is one of the seven administrative regions of Bavaria, Germany.

The district of Swabia is located in southwest Bavaria. It was annexed by Bavaria in 1803, part of the historic region of Swabia and formerly ruled by dukes of the Hohenstaufen dynasty. During the Nazi period, the area was separated from the rest of Bavaria to become the Gau Swabia. It was re-incorporated into Bavaria after the war.

The Regierungsbezirk is subdivided into 3 regions (Planungsregionen): Allgäu, Augsburg, and Donau-Iller. Donau-Iller also includes two districts and one city of Baden-Württemberg.

* Part of the Swabian Keuper Land

Districts and district-free towns before the regional reorganization in 1972 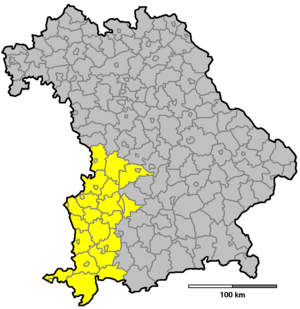 Swabia before the regional reorganization in 1972 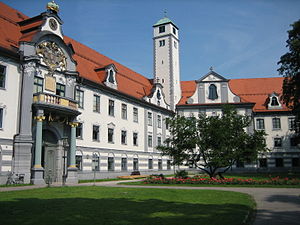 The Bavarian administrative region of Swabia is the eastern part of the duchy of Swabia. After the execution of the Swabian duke Conradin in Naples in 1268, his uncle, the Bavarian duke Louis inherited some of Conradin's possessions in Swabia. In 1803 with the German Mediatisation Bavaria acquired the further East Swabian territories. which were merged with Palatinate-Neuburg.

After the founding of the Kingdom of Bavaria, the state was totally reorganised and, in 1808, divided into 15 administrative government regions (German: Regierungsbezirke (singular Regierungsbezirk)), in Bavaria called Kreise (singular: Kreis). They were created in the fashion of the French departements, quite even in size and population, and named after their main rivers.

In the following years, due to territorial changes (e. g. loss of Tyrol, addition of the Palatinate), the number of Kreise was reduced to 8. The Swabian territories were merged with Palatinate-Neuburg and the new district was called Oberdonaukreis (Upper Danube District). In 1837, king Ludwig I of Bavaria renamed the Kreise after historical territorial names and tribes of the area. This also involved some border changes or territorial swaps. Thus the name Oberdonaukreis changed to Swabia. In 1945, the town of Lindau was divested by France, but reunited with Swabia in 1955. In 1972 the former Swabian city Neuburg an der Donau was reunited with the district of Upper Bavaria. 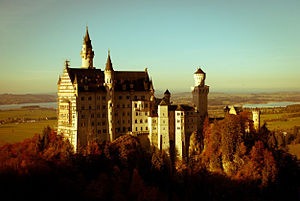 Next to the capital Augsburg and several other old cities including Donauwörth, Nördlingen, Memmingen, Mindelheim, Kaufbeuren and Kempten, the Ottobeuren Abbey and the scenic attractions of the River Danube in the north and the Allgäu in the south with the Allgäu Alps and Oberstdorf and the royal castles of Hohenschwangau and Neuschwanstein next to Füssen belong to the major attractions. With the city of Lindau Bavarian Swabia has access to the Lake Constance.