Schwäbisch (help·info)) is one of the Alemannic dialects of High German. It is spoken in Swabia, a region which covers much of Germany's southwestern state Baden-Württemberg, including its capital Stuttgart, as well as the rural area known as the Swabian Alb, and parts of southwestern Bavaria (Bavarian Swabia). Swabian is also spoken by part of the Danube Swabian minorities in Hungary, former Yugoslavia, Romania, and the former Soviet Union[specify].

The dialect ranges from a 'standard' Swabian, spoken in Stuttgart, to a variety of stronger, thicker forms found in the countryside. Older people can often tell the town a person comes merely from hearing their accent.

Swabian is difficult to understand for speakers of Standard German, not just for its pronunciation but because it contains some vocabulary that differs altogether from Standard German. For example, strawberry jam in Standard German is Erdbeermarmelade while in Swabian it is Bräschdlingsgsälz.[4]

In 2009, Muggeseggele (a Swabian idiom), literally referring to the scrotum of a male housefly, was elected in a readers survey by Stuttgarter Nachrichten, the largest newspaper in Stuttgart as the most beautiful Swabian word, with a large lead on any other expression.[4] The expression is being used as an ironic small measurement unit and is deemed usable towards children (compare Bubenspitzle). German public broadcaster SWR's children's website Kindernetz explained Muggeseggele in their Swabian dictionary for the TV series Ein Fall für B.A.R.Z., which takes place in Fellbach. The website use the sentence A muggeseggele Zeit hetta miar no! and translates it as Ein bisschen Zeit hätten wir noch, meaning if we only had a bit more time.[5]

Some characteristics in comparison to Standard German:[citation needed]

In many regions the Swabian dialect is spoken with a unique intonation that is also present when Swabian native speakers talk in Standard German.

The voiced plosives, the post-alveolar fricative, and the frequent use of diminutives based on "l" suffixes gives the dialect a very "soft" or "mild" feel, that is often felt to be in sharp contrast to the harder varieties of German spoken in the North.

Swabian is categorized as an Alemannic dialect, which in turn is one of the two types of Upper German dialects (the other being Bavarian). The ISO 639-3 language code for Swabian is swg.[8]

A sticker that translates as: "We can do everything. Except [speak] standard German."

The Swabian dialect is composed of numerous sub-dialects, each of which has its own variations. These sub-dialects can be categorized by the difference in the formation of the past participle of 'sein' (to be) into gwäa and gsei. The Gsei group is nearer to other Alemannic dialects, such as Swiss German. It can be divided into South-East Swabian, West Swabian and Central Swabian.[9] 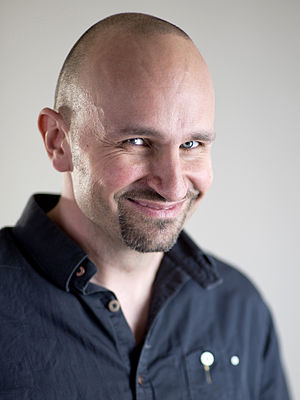 The Baden-Württemberg Chamber of Commerce was highly praised[by whom?] for its advertising campaign with the slogan "Wir können alles. Außer Hochdeutsch." which means "We can [do] everything. Except [speak] Standard German." The campaign was clever in boosting Swabian pride for their dialect and industrial achievements.[10] It however failed to impress Northern Germans[11] and neighboring Baden. Dominik Kuhn (Dodokay) became famous in Germany with schwäbisch fandub videos,[12] dubbing among others Barack Obama with German dialect vocals and revised text.[13]

Articles in Swabian on the Alemannic/Swiss German edition of Wikipedia
Retrieved from "https://infogalactic.com/w/index.php?title=Swabian_German&oldid=269730"
Categories:
Hidden categories: