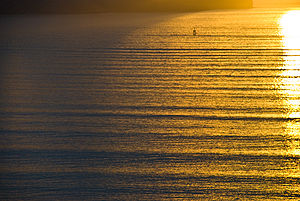 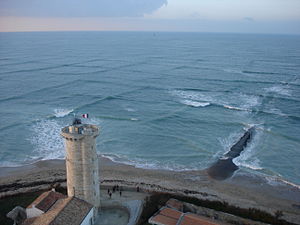 A swell, in the context of an ocean, sea or lake, is a series of mechanical waves that propagate along the interface between water and air and so they are often referred to as surface gravity waves. These series of surface gravity waves are not generated by the immediate local wind, instead by distant weather systems, where wind blows for a duration of time over a fetch of water. This is the primary definition of a swell as opposed to a locally generated wind wave, which is still under the influence of the mechanisms that created it e.g. Wind blowing over a puddle. More generally, a swell consists of wind-generated waves that are not—or are hardly—affected by the local wind at that time. Swell waves often have a long wavelength but this varies due to the size, strength and duration of the weather system responsible for the swell and the size of the water body e.g. wavelengths are rarely more than 150 m in the Mediterranean. Swell wavelength, also, varies from event to event. Occasionally, swells which are longer than 700 m occur as a result of the most severe storms. Swells have a narrower range of frequencies and directions than locally generated wind waves, because swell waves have dispersed from their generation area, have dissipated and therefore lost an amount of randomness, taking on a more defined shape and direction. 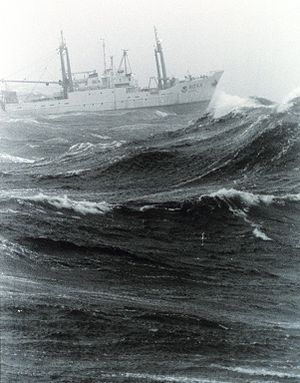 The great majority of large breakers one observes on a beach result from distant weather systems over a fetch of ocean. Five factors influence the formation of wind waves[1] which will go on to become ocean swell:

All of these factors work together to determine the size of wind waves:

A fully developed sea has the maximum wave size theoretically possible for a wind of a specific strength, duration, and fetch. Further exposure to that specific wind could only cause a loss of energy due to the breaking of wave tops and formation of "whitecaps". Waves in a given area typically have a range of heights. For weather reporting and for scientific analysis of wind wave statistics, their characteristic height over a period of time is usually expressed as significant wave height. This figure represents an average height of the highest one-third of the waves in a given time period (usually chosen somewhere in the range from 20 minutes to twelve hours), or in a specific wave or storm system. The significant wave height is also the value a "trained observer" (e.g. from a ship's crew) would estimate from visual observation of a sea state. Given the variability of wave height, the largest individual waves are likely to be somewhat less than twice the reported significant wave height for a particular day or storm.[2]

Sea water wave is generated by many kinds of disturbances such as Seismic events, gravity, and crossing wind. The generation of wind wave is initiated by the disturbances of cross wind field on the surface of the sea water. Two major Mechanisms of surface wave formation by winds (a.k.a.‘The Miles-Phillips Mechanism’) and other sources (ex. earthquakes) of wave formation can explain the generation of wind waves.

However, if one set a flat water surface (Beaufort Point,0) and abrupt cross wind flows on the surface of the water,then the generation of surface wind waves can be explained by following two mechanisms which initiated by normal pressure fluctuations of turbulent winds and parallel wind shear flows.

The mechanism of the surface wave generation by winds

2) starts from “wind shear forces” on the water surface (J.W.Miles, applied to mainly 2D deep water gravity waves) ; John W. Miles suggested a surface wave generation mechanism which is initiated by turbulent wind shear flows Ua(y), based on the inviscid Orr-Sommerfeld equation in 1957. He found the energy transfer from wind to water surface as a wave speed, c is proportional to the curvature of the velocity profile of wind Ua’’(y) at point where the mean wind speed is equal to the wave speed (Ua=c, where, Ua is the Mean turbulent wind speed). Since the wind profile Ua(y) is logarithmic to the water surface, the curvature Ua’’(y) have negative sign at the point of Ua=c. This relations show the wind flow transferring its kinetic energy to the water surface at their interface, and arises wave speed, c.

the growth-rate can be determined by the curvature of the winds ((d^2 Ua)/(dz^2 )) at the steering height (Ua (z=z_h)=c) for a given wind speed Ua {Assumptions; 1. 2D parallel shear flow, Ua(y) 2. incompressible, inviscid water / wind 3. irrotational water 4. slope of the displacement of surface is small}[4]

Generally, these wave formation mechanisms occur together on the ocean surface and arise wind waves and grows up to the fully developed waves.

If we suppose a very flat sea surface (Beaufort number, 0), and sudden wind flow blows steadily across the sea surface, physical wave generation process will be like;

3. The interactions between the waves on the surface generate longer waves (Hasselmann et al., 1973[6]) and the interaction will transfer wave energy from the shorter waves generated by the Miles mechanism to the waves have slightly lower frequencies than the frequency at the peak wave magnitudes, then finally the waves will be faster than the cross wind speed (Pierson & Moskowitz[7]).

((NOTE: Most of the wave speeds calculated from the wave length divided by the period are proportional to sqrt (length). Thus, except for the shortest wave length, the waves follow the deep water theory described in the next section. The 28 ft long wave must be either in shallow water or between deep and shallow.))

The dissipation of swell energy is much stronger for short waves, which is why swells from distant storms are only long waves. The dissipation of waves with periods larger than 13 s is very weak but still significant at the scale of the Pacific Ocean.[8] These long swells lose half of their energy over a distance that varies from over 20000 km (half the distance round the globe) to just over 2000 km. This variation was found to be a systematic function of the swell steepness: the ratio of the swell height to the wavelength. The reason for this behaviour is still unclear but it is possible that this dissipation is due to the friction at the air-sea interface.

Swells are often created by storms thousands of nautical miles away from the beach where they break, and the propagation of the longest swells is only limited by shorelines. For example, swells generated in the Indian Ocean have been recorded in California after more than half a round-the-world trip.[9] This distance allows the waves comprising the swells to be better sorted and free of chop as they travel toward the coast. Waves generated by storm winds have the same speed and will group together and travel with each other, while others moving at even a fraction of a metre per second slower will lag behind, ultimately arriving many hours later due to the distance covered. The time of propagation from the source t is proportional to the distance X divided by the wave period T. In deep water it is

where g is the acceleration of gravity. For a storm located 10000 km away, swells with a period T=15 s will arrive 10 days after the storm, followed by 14 s swells another 17 hours later, and so forth.

This dispersive arrivals of swells, long periods first with a reduction in the peak wave period over time, can be used to tell the distance at which swells were generated.

Whereas the sea state in the storm has a frequency spectrum with more or less always the same shape (i.e. a well defined peak with dominant frequencies within plus or minus 7% of the peak), the swell spectra are more and more narrow, sometimes as 2% or less, as waves disperse further and further away. The result is that wave groups (called sets by surfers) can have a large number of waves. From about seven waves per group in the storm, this rises to 20 and more in swells from very distant storms.

Just like for all water waves the energy flux is proportional to the significant wave height squared times the group velocity. In deep water this group velocity is proportional to the wave period. Hence swells, with usually longer periods, can pack a lot more energy than shorter wind seas. Also, the amplitude of infragravity waves increases dramatically with the wave period (typically like the period squared), which results in higher run-up.

As swell waves typically have long wavelengths (and thus a deeper wave base), they begin the refraction process (see water waves) at greater distances offshore (in deeper water) than locally generated waves.

Since swell-generated waves are mixed with normal sea waves, they can be difficult to detect with the naked eye (particularly away from the shore) if they are not significantly larger than the normal waves. From a signal analysis point of view, swells can be thought of as a fairly regular (though not continual) wave signal existing in the midst of strong noise (i.e., normal waves and chop).

Swells were used by Polynesian navigators to maintain course when no other clues were available, such as on foggy nights.[11]