A syllabary is a set of written symbols that represent the syllables or (more frequently) moras which make up words. A symbol in a syllabary, called a syllabogram, typically represents an (optional) consonant sound (simple onset) followed by a vowel sound (nucleus)—that is, a CV or V syllable—but other phonographic mappings such as CVC and CV-tone are also found in syllabaries. 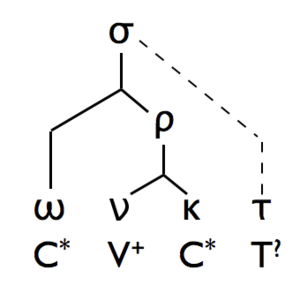 Each syllable (σ) branches into consonantal onset (ω) and rime (ρ) that is divided into nucleus (ν) and coda (κ), non-/supra-segmental parameters like tone (τ) affect the syllable as a whole

Syllabograms, hence syllabaries, are pure, analytic or arbitrary if they do not share graphic similarities that correspond to phonic similarities, i.e. the symbol for ka does not resemble in any predictable way the symbol for ki, nor the symbol for a. Otherwise they are synthetic, if they vary by onset, rime, nucleus or coda, or systematic, if they vary by all of them.[citation needed] Some scholars, e.g. Daniels,[1] reserve the general term for analytic syllabaries and invent other terms (abugida, abjad) as necessary. 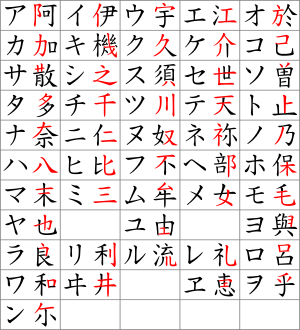 Syllabaries often begin as simplified logograms, as shown here with the Japanese katakana writing system. To the left is the modern letter, with its original Chinese Character form on the right. 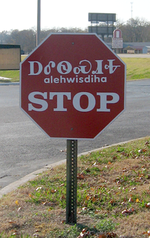 Languages that use syllabic writing include Mycenaean Greek (Linear B), the North American language Cherokee, the African language Vai, the English-based creole Ndyuka written with the Afaka script, Yi language and formerly Nü Shu for the language of Xiangnan Tuhua in China. In addition, the undecoded Cretan Linear A is also believed by some to be a syllabic script, though this is not proven. The Chinese, Sumerian and Akkadian cuneiform, and Maya scripts are largely syllabic in nature, although based on logograms. They are therefore sometimes referred to as logosyllabic.

The contemporary Japanese language uses two syllabaries together called kana, namely hiragana and katakana (developed around AD 700). They are mainly used to write some native words and grammatical elements, as well as foreign words, e.g. hotel is written with three kana, ホテル (ho-te-ru). Because Japanese uses many CV (consonant + vowel) syllables, a syllabary is well suited to write the language. As in many syllabaries, however, vowel sequences and final consonants are written with separate glyphs, so that both atta and kaita are written with three kana: あった (a-t-ta) and かいた (ka-i-ta). It is therefore sometimes called a moraic writing system.

Languages that use syllabaries today tend to have simple phonotactics, with a predominance of monomoraic (CV) syllables. For example, the modern Yi script is used to write a language that has no diphthongs or syllable codas; unusually among syllabaries, there is a separate glyph for every consonant-vowel-tone combination (CVT) in the language (apart from one tone which is indicated with a diacritic).

Few syllabaries have glyphs for syllables that are not monomoraic, and those that once did have simplified over time to eliminate that complexity. For example, the Vai syllabary originally had separate glyphs for syllables ending in a coda (doŋ), a long vowel (soo), or a diphthong (bai), though not enough glyphs to distinguish all CV combinations (some distinctions were ignored). The modern script has been expanded to cover all moras, but at the same time reduced to exclude all other syllables. Bimoraic syllables are now written with two letters, as in Japanese: diphthongs are written with the help of V or hV glyphs, and the nasal coda is written with the glyph for ŋ, which can form a syllable of its own in Vai.

In Linear B, which was used to transcribe Greek, a language with complex syllables, complex consonant onsets were either written with two glyphs or simplified to one, while codas were generally ignored, e.g. ko-no-so for Κνωσός Knōsos, pe-ma for σπέρμα sperma.

The Cherokee syllabary generally uses dummy vowels for coda consonants, but also has a segmental grapheme for /s/, which can be used both as a coda and in an initial /sC/ consonant cluster.

The languages of South Asia and Southeast Asia, as well as the Ethiopian languages, have a type of alphabet called an abugida or alphasyllabary. In these scripts, unlike in pure syllabaries, syllables starting with the same consonant are generally expressed with characters that are based on the same sign in a regular way, and usually each character representing a syllable consists of several elements which designate the individual sounds of that syllable. In the 19th century these systems were called syllabics, a term which has survived in the name of Canadian Aboriginal syllabics (also an abugida). In a true syllabary there may be graphic similarity between characters that share a common consonant or vowel sound, but it is not systematic or close to regular. For example, the characters for 'ke', 'ka', and 'ko' in Japanese hiragana have no similarity to indicate their common "k" sound (these being: け, か and こ). Compare abugida, where each grapheme typically represents a syllable but where characters representing related sounds are all similar graphically (typically, a common consonantal base is annotated in a more or less consistent manner to represent the vowel in the syllable). For example, in Devanagari, an abugida, the same characters for 'ke', 'ka' and 'ko' are के, का and को respectively, with क indicating their common "k" sound.

English allows complex syllable structures, making it cumbersome to write English words with a syllabary. A "pure" syllabary would require a separate glyph for every syllable in English. Thus one would need separate symbols for "bag", "beg", "big", "bog", "bug"; "bad", "bed", "bid", "bod", "bud", "book", "bay", "bead", "bide", "bode", "boom", "bird", "Boyd", "bow", etc. However, such pure systems are rare. A work-around to this problem, common to several syllabaries around the world (including English loanwords in Japanese), is to write an echo vowel, as if the syllable coda were a second syllable: ba-gu for "bag", etc. Another common approach is to simply ignore the coda, so that "bag" would be written ba. This obviously would not work well for English, but was done in Mycenean Greek when the root word was two or three syllables long and the syllable coda was a weak consonant such as n or s (example: χρυσος chrysos written as ku-ru-so).