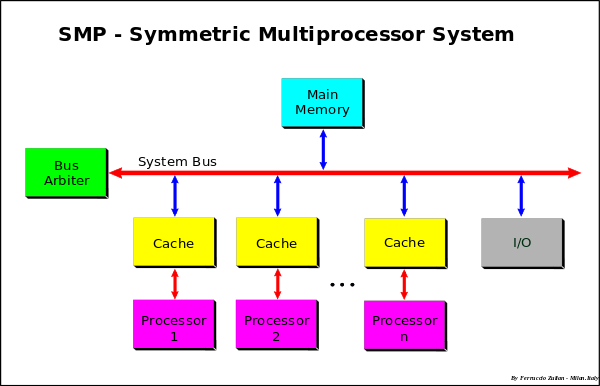 Diagram of a symmetric multiprocessing system

SMP systems are tightly coupled multiprocessor systems with a pool of homogeneous processors running independently, each processor executing different programs and working on different data and with capability of sharing common resources (memory, I/O device, interrupt system and so on) and connected using a system bus or a crossbar.

SMP systems have centralized shared memory called main memory (MM) operating under a single operating system with two or more homogeneous processors. Usually each processor has an associated private high-speed memory known as cache memory (or cache) to speed up the main memory data access and to reduce the system bus traffic.

Processors may be interconnected using buses, crossbar switches or on-chip mesh networks. The bottleneck in the scalability of SMP using buses or crossbar switches is the bandwidth and power consumption of the interconnect among the various processors, the memory, and the disk arrays. Mesh architectures avoid these bottlenecks, and provide nearly linear scalability to much higher processor counts at the sacrifice of programmability:

Serious programming challenges remain with this kind of architecture because it requires two distinct modes of programming, one for the CPUs themselves and one for the interconnect between the CPUs. A single programming language would have to be able to not only partition the workload, but also comprehend the memory locality, which is severe in a mesh-based architecture.[1]

SMP systems allow any processor to work on any task no matter where the data for that task are located in memory, provided that each task in the system is not in execution on two or more processors at the same time; with proper operating system support, SMP systems can easily move tasks between processors to balance the workload efficiently.

The earliest production system with multiple identical processors was the Burroughs B5000 which was functional in around 1961. However at run-time this was asymmetric, with one processor restricted to application programs while the other mainly handled the operating system and hardware interrupts.

IBM offered dual-processor computer systems based on its System/360 model 65 and the closely related model 67.[2] and 67-2[3] The operating systems that ran on these machines were OS/360 M65MP[4] and TSS/360. Other software developed at universities, notably the Michigan Terminal System (MTS), used both CPUs. Both processors could access data channels and initiate I/O. In OS/360 M65MP, since the operating system kernel ran on both processors (though with a "big lock" around the I/O handler) and peripherals could generally be attached to either processor.[5] The MTS supervisor (UMMPS) ran on either or both CPUs of the IBM System/360 model 67-2. Supervisor locks were small and were used to protect individual common data structures that might be accessed simultaneously from either CPU.[6]

Digital Equipment Corporation's first multi-processor VAX system, the VAX-11/782, was asymmetric,[7] but later VAX multiprocessor systems were SMP.[8] The first commercial Unix SMP implementation was the NUMA based Honeywell Information Systems Italy XPS-100 designed by Dan Gielan of VAST Corporation in 1985. Its design supported up to 14 processors although due to electrical limitations the largest marketed version was a dual processor system. The operating system was derived and ported by VAST Corporation from AT&T 3B20 Unix SysVr3 code used internally within AT&T.

On personal computers, SMP is less useful for applications that have not been modified. If the system rarely runs more than one process at a time, SMP is useful only for applications that have been modified for multithreaded (multitasked) processing. Custom-programmed software can be written or modified to use multiple threads, so that it can make use of multiple processors. However, most consumer products such as word processors and computer games are written in such a manner that they cannot gain large benefits from concurrent systems. For games this is usually because writing a program to increase performance on SMP systems can produce a performance loss on uniprocessor systems.

Multithreaded programs can also be used in time-sharing and server systems that support multithreading, allowing them to make more use of multiple processors.

Uniprocessor and SMP systems require different programming methods to achieve maximum performance. Programs running on SMP systems may experience a performance increase even when they have been written for uniprocessor systems. This is because hardware interrupts that usually suspend program execution while the kernel handles them can execute on an idle processor instead. The effect in most applications (e.g. games) is not so much a performance increase as the appearance that the program is running much more smoothly. Some applications, particularly compilers and some distributed computing projects, run faster by a factor of (nearly) the number of additional processors[citation needed].

Systems programmers must build support for SMP into the operating system: otherwise, the additional processors remain idle and the system functions as a uniprocessor system.

When more than one program executes at the same time, an SMP system has considerably better performance than a uni-processor, because different programs can run on different CPUs simultaneously.

In cases where an SMP environment processes many jobs, administrators often experience a loss of hardware efficiency. Software programs have been developed to schedule jobs so that the processor utilization reaches its maximum potential. Good software packages can achieve this maximum potential by scheduling each CPU separately, as well as being able to integrate multiple SMP machines and clusters.

Access to RAM is serialized; this and cache coherency issues causes performance to lag slightly behind the number of additional processors in the system.

Before about 2006, entry-level servers and workstations with two processors dominated the SMP market. With the introduction of dual-core devices, SMP is found in most new desktop machines and in many laptop machines. The most popular entry-level SMP systems use the x86 instruction set architecture and are based on Intel’s Xeon, Pentium D, Core Duo, and Core 2 Duo based processors or AMD’s Athlon64 X2, Quad FX or Opteron 200 and 2000 series processors. Servers use those processors and other readily available non-x86 processor choices, including the Sun Microsystems UltraSPARC, Fujitsu SPARC64 III and later, SGI MIPS, Intel Itanium, Hewlett Packard PA-RISC, Hewlett-Packard (merged with Compaq, which acquired first Digital Equipment Corporation) DEC Alpha, IBM POWER and PowerPC (specifically G4 and G5 series, as well as earlier PowerPC 604 and 604e series) processors. In all cases, these systems are available in uniprocessor versions as well.

Earlier SMP systems used motherboards that have two or more CPU sockets. More recently[update], microprocessor manufacturers introduced CPU devices with two or more processors in one device, for example, the Itanium, POWER, UltraSPARC, Opteron, Athlon, Core 2, and Xeon all have multi-core variants. Athlon and Core 2 Duo multiprocessors are socket-compatible with uniprocessor variants, so an expensive dual socket motherboard is no longer needed to implement an entry-level SMP machine. It should also be noted that dual socket Opteron designs are technically ccNUMA designs, though they can be programmed as SMP for a slight loss in performance. Software based SMP systems can be created by linking smaller systems together. An example of this is the software developed by ScaleMP.

With the introduction of ARM Cortex-A9 multi-core SoCs, low-cost symmetric multiprocessing embedded systems began to flourish in the form of smartphones and tablet computers with a multi-core processor.

The Burroughs D825 first implemented SMP in 1962.[9][10] It was implemented later on other mainframes. Mid-level servers, using between four and eight processors, can be found using the Intel Xeon MP, AMD Opteron 800 and 8000 series and the above-mentioned UltraSPARC, SPARC64, MIPS, Itanium, PA-RISC, Alpha and POWER processors. High-end systems, with sixteen or more processors, are also available with all of the above processors.

Sequent Computer Systems built large SMP machines using Intel 80386 (and later 80486) processors. Some smaller 80486 systems existed, but the major x86 SMP market began with the Intel Pentium technology supporting up to two processors. The Intel Pentium Pro expanded SMP support with up to four processors natively. Later, the Intel Pentium II, and Intel Pentium III processors allowed dual CPU systems, except for the respective Celerons. This was followed by the Intel Pentium II Xeon and Intel Pentium III Xeon processors, which could be used with up to four processors in a system natively. In 2001 AMD released their Athlon MP, or MultiProcessor CPU, together with the 760MP motherboard chipset as their first offering in the dual processor marketplace. Although several much larger systems were built, they were all limited by the physical memory addressing limitation of 64 GiB. With the introduction of 64-bit memory addressing on the AMD64 Opteron in 2003 and Intel 64 (EM64T) Xeon in 2005, systems are able to address much larger amounts of memory; their addressable limitation of 16 EiB is not expected to be reached in the foreseeable future.

Diagram of a typical SMP system. Three processors are connected to the same memory module through a system bus or crossbar switch

SMP using a single shared system bus represents one of the earliest styles of multiprocessor machine architectures, typically used for building smaller computers with up to 8 processors.

Larger computer systems might use newer architectures such as NUMA (Non-Uniform Memory Access), which dedicates different memory banks to different processors. In a NUMA architecture, processors may access local memory quickly and remote memory more slowly. This can dramatically improve memory throughput as long as the data are localized to specific processes (and thus processors). On the downside, NUMA makes the cost of moving data from one processor to another, as in workload balancing, more expensive. The benefits of NUMA are limited to particular workloads, notably on servers where the data are often associated strongly with certain tasks or users.

Finally, there is computer clustered multiprocessing (such as Beowulf), in which not all memory is available to all processors. Clustering techniques are used fairly extensively to build very large supercomputers.