From Infogalactic: the planetary knowledge core
Jump to: navigation, search
For other uses, see Symmetry (disambiguation). 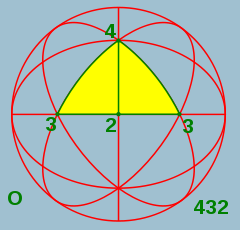 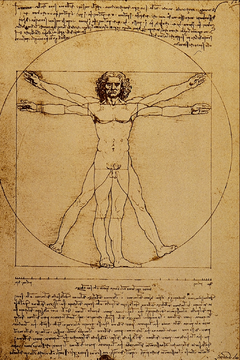 Leonardo da Vinci's 'Vitruvian Man' (ca. 1487) is often used as a representation of symmetry in the human body and, by extension, the natural universe. 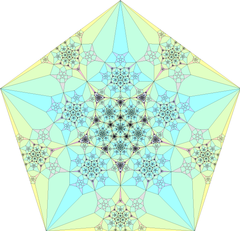 A fractal-like shape that has reflectional symmetry, rotational symmetry and self-similarity, three forms of symmetry. This shape is obtained by a finite subdivision rule. 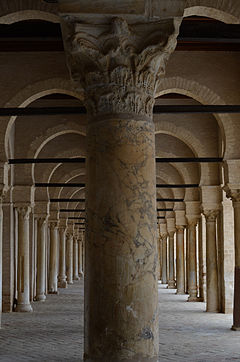 Symmetric arcades of a portico in the Great Mosque of Kairouan also called the Mosque of Uqba, in Tunisia.

Symmetry (from Greek συμμετρία symmetria "agreement in dimensions, due proportion, arrangement")[1] in everyday language refers to a sense of harmonious and beautiful proportion and balance.[2][lower-alpha 1] In mathematics, "symmetry" has a more precise definition, that an object is invariant to a transformation, such as reflection but including other transforms too. Although these two meanings of "symmetry" can sometimes be told apart, they are related, so they are here discussed together.

Mathematical symmetry may be observed with respect to the passage of time; as a spatial relationship; through geometric transformations such as scaling, reflection, and rotation; through other kinds of functional transformations; and as an aspect of abstract objects, theoretic models, language, music and even knowledge itself.[3][lower-alpha 2]

This article describes symmetry from three perspectives: in mathematics, including geometry, the most familiar type of symmetry for many people; in science and nature; and in the arts, covering architecture, art and music.

The opposite of symmetry is asymmetry. 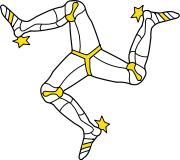 The triskelion has 3-fold rotational symmetry.

A geometric shape or object is symmetric if it can be divided into two or more identical pieces that are arranged in an organized fashion.[4] This means that an object is symmetric if there is a transformation that moves individual pieces of the object but doesn't change the overall shape. The type of symmetry is determined by the way the pieces are organized, or by the type of transformation:

Other areas of mathematics

In general, every kind of structure in mathematics will have its own kind of symmetry. Examples include even and odd functions in calculus; the symmetric group in abstract algebra; symmetric matrices in linear algebra; and the Galois group in Galois theory. In statistics, it appears as symmetric probability distributions, and as skewness, asymmetry of distributions.[citation needed]

In science and nature

Symmetry in physics has been generalized to mean invariance—that is, lack of change—under any kind of transformation, for example arbitrary coordinate transformations.[13] This concept has become one of the most powerful tools of theoretical physics, as it has become evident that practically all laws of nature originate in symmetries. In fact, this role inspired the Nobel laureate PW Anderson to write in his widely read 1972 article More is Different that "it is only slightly overstating the case to say that physics is the study of symmetry."[14] See Noether's theorem (which, in greatly simplified form, states that for every continuous mathematical symmetry, there is a corresponding conserved quantity; a conserved current, in Noether's original language);[15] and also, Wigner's classification, which says that the symmetries of the laws of physics determine the properties of the particles found in nature.[16] 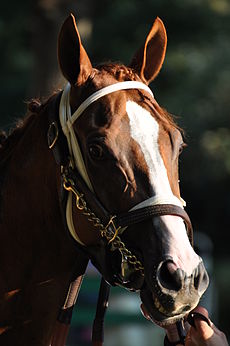 Many animals are approximately mirror-symmetric, though internal organs are often arranged asymmetrically.

Bilateral animals, including humans, are more or less symmetric with respect to the sagittal plane which divides the body into left and right halves.[17] Animals that move in one direction necessarily have upper and lower sides, head and tail ends, and therefore a left and a right. The head becomes specialized with a mouth and sense organs, and the body becomes bilaterally symmetric for the purpose of movement, with symmetrical pairs of muscles and skeletal elements, though internal organs often remain asymmetric.[18]

Plants and sessile (attached) animals such as sea anemones often have radial or rotational symmetry, which suits them because food or threats may arrive from any direction. Fivefold symmetry is found in the echinoderms, the group that includes starfish, sea urchins, and sea lilies.[19]

Symmetry is important to chemistry because it undergirds essentially all specific interactions between molecules in nature (i.e., via the interaction of natural and human-made chiral molecules with inherently chiral biological systems). The control of the symmetry of molecules produced in modern chemical synthesis contributes to the ability of scientists to offer therapeutic interventions with minimal side effects. A rigorous understanding of symmetry explains fundamental observations in quantum chemistry, and in the applied areas of spectroscopy and crystallography. The theory and application of symmetry to these areas of physical science draws heavily on the mathematical area of group theory.[20]

People observe the symmetrical nature, often including asymmetrical balance, of social interactions in a variety of contexts. These include assessments of Reciprocity, empathy, sympathy, apology, dialog, respect, justice, and revenge. Reflective equilibrium is the balance that may be attained through deliberative mutual adjustment among general principles and specific judgments.[21] Symmetrical interactions send the moral message "we are all the same" while asymmetrical interactions may send the message "I am special; better than you." Peer relationships, such as can be governed by the golden rule, are based on symmetry, whereas power relationships are based on asymmetry.[22] Symmetrical relationships can to some degree be maintained by simple (game theory) strategies seen in symmetric games such as tit for tat.[23] 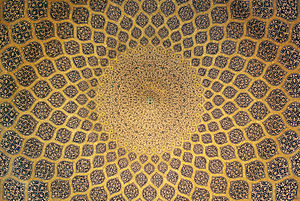 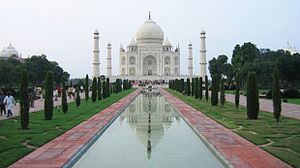 Seen from the side, the Taj Mahal has bilateral symmetry; from the top (in plan), it has fourfold symmetry.

Symmetry finds its ways into architecture at every scale, from the overall external views of buildings such as Gothic cathedrals and The White House, through the layout of the individual floor plans, and down to the design of individual building elements such as tile mosaics. Islamic buildings such as the Taj Mahal and the Lotfollah mosque make elaborate use of symmetry both in their structure and in their ornamentation.[24][25] Moorish buildings like the Alhambra are ornamented with complex patterns made using translational and reflection symmetries as well as rotations.[26]

It has been said that only bad architects rely on a "symmetrical layout of blocks, masses and structures";[27] Modernist architecture, starting with International style, relies instead on "wings and balance of masses".[27]

In pottery and metal vessels 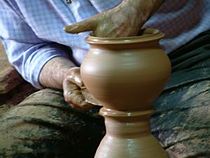 Since the earliest uses of pottery wheels to help shape clay vessels, pottery has had a strong relationship to symmetry. Pottery created using a wheel acquires full rotational symmetry in its cross-section, while allowing substantial freedom of shape in the vertical direction. Upon this inherently symmetrical starting point, potters from ancient times onwards have added patterns that modify the rotational symmetry to achieve visual objectives.

Cast metal vessels lacked the inherent rotational symmetry of wheel-made pottery, but otherwise provided a similar opportunity to decorate their surfaces with patterns pleasing to those who used them. The ancient Chinese, for example, used symmetrical patterns in their bronze castings as early as the 17th century BC. Bronze vessels exhibited both a bilateral main motif and a repetitive translated border design.[28]

As quilts are made from square blocks (usually 9, 16, or 25 pieces to a block) with each smaller piece usually consisting of fabric triangles, the craft lends itself readily to the application of symmetry.[29]

In carpets and rugs

A long tradition of the use of symmetry in carpet and rug patterns spans a variety of cultures. American Navajo Indians used bold diagonals and rectangular motifs. Many Oriental rugs have intricate reflected centers and borders that translate a pattern. Not surprisingly, rectangular rugs typically use quadrilateral symmetry—that is, motifs that are reflected across both the horizontal and vertical axes.[30][31] 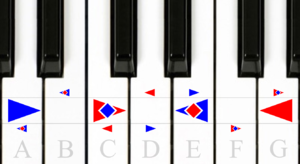 Major and minor triads on the white piano keys are symmetrical to the D. (compare article) (file)

Symmetry is not restricted to the visual arts. Its role in the history of music touches many aspects of the creation and perception of music.

Symmetry has been used as a formal constraint by many composers, such as the arch (swell) form (ABCBA) used by Steve Reich, Béla Bartók, and James Tenney. In classical music, Bach used the symmetry concepts of permutation and invariance.[32]

Symmetry is also an important consideration in the formation of scales and chords, traditional or tonal music being made up of non-symmetrical groups of pitches, such as the diatonic scale or the major chord. Symmetrical scales or chords, such as the whole tone scale, augmented chord, or diminished seventh chord (diminished-diminished seventh), are said to lack direction or a sense of forward motion, are ambiguous as to the key or tonal center, and have a less specific diatonic functionality. However, composers such as Alban Berg, Béla Bartók, and George Perle have used axes of symmetry and/or interval cycles in an analogous way to keys or non-tonal tonal centers.

Perle (1992)[33] explains "C–E, D–F♯, [and] Eb–G, are different instances of the same interval … the other kind of identity. … has to do with axes of symmetry. C–E belongs to a family of symmetrically related dyads as follows:"

Thus in addition to being part of the interval-4 family, C–E is also a part of the sum-4 family (with C equal to 0).

Interval cycles are symmetrical and thus non-diatonic. However, a seven pitch segment of C5 (the cycle of fifths, which are enharmonic with the cycle of fourths) will produce the diatonic major scale. Cyclic tonal progressions in the works of Romantic composers such as Gustav Mahler and Richard Wagner form a link with the cyclic pitch successions in the atonal music of Modernists such as Bartók, Alexander Scriabin, Edgard Varèse, and the Vienna school. At the same time, these progressions signal the end of tonality.

In other arts and crafts

Symmetries appear in the design of objects of all kinds. Examples include beadwork, furniture, sand paintings, knotwork, masks, and musical instruments. Symmetries are central to the art of M.C. Escher and the many applications of tessellation in art and craft forms such as wallpaper, ceramic tilework, batik, ikat, carpet-making, and many kinds of textile and embroidery patterns.[35]

The relationship of symmetry to aesthetics is complex. Humans find bilateral symmetry in faces physically attractive;[36] it indicates health and genetic fitness.[37][38] Opposed to this is the tendency for excessive symmetry to be perceived as boring or uninteresting. People prefer shapes that have some symmetry, but enough complexity to make them interesting.[39]

Symmetry can be found in various forms in literature, a simple example being the palindrome where a brief text reads the same forwards or backwards. Stories may have a symmetrical structure, as in the rise:fall pattern of Beowulf.