The Symphony No. 11 in G minor (Opus 103; subtitled The Year 1905) by Dmitri Shostakovich was written in 1957 and premiered, by the USSR Symphony Orchestra under Natan Rakhlin, on 30 October 1957. The subtitle of the symphony refers to the events of the Russian Revolution of 1905.

The symphony was conceived as a popular piece and proved an instant success in Russia—his greatest, in fact, since the Leningrad Symphony fifteen years earlier.[1] The work's popular success, as well as its earning him a Lenin Prize in April 1958, marked the composer's formal rehabilitation from the Zhdanov Doctrine of 1948.

A month after the composer had received the Lenin Prize, a Central Committee resolution "correcting the errors" of the 1948 decree restored all those affected by it to official favor, blaming their treatment on "J.V. Stalin's subjective attitude to certain works of art and the very adverse influence exercised on Stalin by Molotov, Malenkov and Beria."[2]

The symphony has four movements played without break, and lasts approximately one hour.

The Eleventh is sometimes dubbed "a film score without the film". Indeed the musical images have an immediacy and simplicity unusual even for Shostakovich the epic symphonist, and an additional thread is provided by the nine revolutionary songs which appear during the work. Some of these songs date back to the 19th century, others to the year 1905. Shostakovich does not merely quote these songs; he integrates them into the symphonic fabric within the bounds of his compositional style. This use of pseudo-folk material was a marked departure from his usual technique. However, it lent the symphony a strong emphasis on tonality and a generally accessible musical idiom.[3] They were also songs the composer knew well. His family knew and sang them regularly while he was growing up.[4] 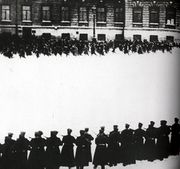 A line of armed soldiers facing peaceful demonstrators at the Winter Palace in St. Petersburg (known at the time as Petrograd): still from the Soviet propaganda movie Devyatoe yanvarya "9th January" (1925)

Shostakovich originally intended the Eleventh Symphony to mark the 50th anniversary of the Russian Revolution of 1905 and would have written it in 1955. Several personal factors kept him from composing the work until 1957. These factors included his mother's death, his tumultuous second marriage and the arrival of many newly freed friends from the Gulag. Events in Hungary in 1956 may have stirred Shostakovich out of his compositional inertia and acted as a catalyst for his writing the symphony.[5]

Requiem for a generation?

According to the composer's son-in-law Yevgeny Chukovsky, the original title sheet for this symphony read not "1905" but "1906," the year of the composer's birth. This, some critics have suggested, can allow us to hear the Eleventh Symphony as a requiem not only for himself but for his generation. The trials that the composer's generation suffered were unprecedented in Russian history—two world wars, a civil war, two revolutions plus the horrors of forced collectivism and the Great Purge of the Stalin years. The only thing that spared this generation a second purge was the death of Stalin himself in 1953.[6]

Nevertheless, the same critics suggest, this idea of the symphony about the fate of a generation does not contradict its official theme of revolution. Unlike the October 1917 Revolution, the 1905 Revolution was not politicised by the Party; therefore, it had not lost its romantic aura in the eyes of later generations. Because of this romantic aura, a spirit of struggle for a just cause imbues such diverse works about that period as Sergei Eisenstein's film The Battleship Potemkin and Boris Pasternak's narrative poems "1905" and "Lieutenant Schmidt" as well as Shostakovich's symphony.[7]

The title, The Year 1905, recalls the start of the first Russian Revolution of 1905, which was partially fired by the events on 9 January (9 January by the Julian calendar still in use in Russia at the time, modern date of 22 January 1905) date of that year. Some Western critics characterized the symphony as overblown "film music"—in other words, as an agitprop broadsheet lacking both substance and depth.[1] Many now consider the work to carry a much more reflective attitude, one which looks at Russian history as a whole from the standpoint of 1957, four years after the death of Stalin. Another common interpretation is that the symphony is a response to the crushing of the Hungarian Revolution of 1956; it was composed immediately after the uprising, and his widow Irina has said that he had it "in mind" during composition [8]

Regardless, Shostakovich considered this work his most "Mussorgskian" symphony. Mussorgsky for him symbolised two things—the people and recurrence. Since it was about the people who suffered as a result of the Bloody Sunday, he wrote it in a simple, direct manner. The people would basically be destined to suffer at the hands of indifferent autocrats; they would periodically protest in the name of humanity, only to be betrayed or punished.[9] The composer reportedly told Solomon Volkov, "I wanted to show this recurrence in the Eleventh Symphony.... It's about the people, who have stopped believing because the cup of evil has run over."[10] While this passage may have seemed far-fetched to some critics when Testimony first appeared, especially in the context of linking the symphony to the Hungarian Revolution, the concept of recurrence is reportedly one which has been central to Russian artists in the wake of that event and held tremendous significance among the intelligentsia in Russia.[11]

The revolutionary song quotations in the work itself can support many interpretations: the first movement quotes a song, "Slushay!" ("Listen!") with the text "The autumn night is...black as the tyrant's conscience", while the final movement refers to one including the words "shame on you tyrants." Volkov compares this movement's juxtaposition of revolutionary songs (notably the Varshavianska song) to a cinematic montage, while quoting Anna Akhmatova's description of it as "white birds against a black sky."

Some have argued that Shostakovich's inclusion of these songs makes more explicit in the symphony the actual chain of consequences as well as events being portrayed—namely, that had Tsar Nicholas II listened to the people's demands and liberalized the government in 1905 to the point where widespread social change was enacted, there would not have been a recurrence of protest 12 years later to topple him from power.[12] Failing to listen, the tsar's head is bowed as he inherits the consequences portrayed in the symphony's finale. Thus, in Shostakovich's formal scheme for the symphony, denial of the people merely incites violence and a further cycle of recurrence. Cementing this message is the subtitle for the symphony's final movement, "Nabat" (translated in English as "tocsin" or "alarm" or "the alarm drum"). Nabat was also the name of a 19th-century review, edited by Narodnik Petr Tkachev, who was notorious for maintaining that nothing, however immoral, was forbidden from the true revolutionary. Tkachev advocated that revolution should be carried out by a small, motivated Party willing to use whatever means necessary, rather than by the people themselves.[13]