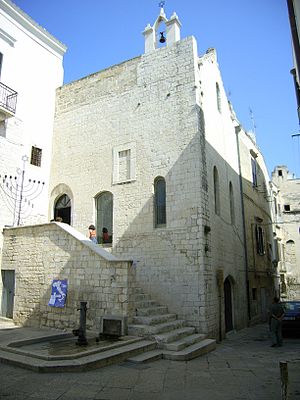 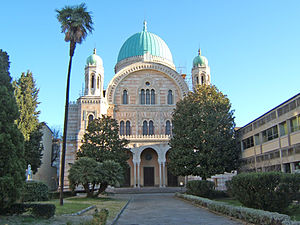 Synagogues have a large hall for prayer (the main sanctuary), and may also have smaller rooms for study and sometimes a social hall and offices. Some have a separate room for Torah study, called the Beith Midrash (Sefaradi) "beis midrash (Ashkenazi)—בית מדרש ("House of Study").

Synagogues are consecrated spaces used for the purpose of prayer, Torah reading, study and assembly; however a synagogue is not necessary for worship. Halakha holds that Communal Jewish worship can be carried out wherever ten Jews (a minyan) assemble. Worship can also be carried out alone or with fewer than ten people assembled together. However, Halakha considers certain prayers as communal prayers and therefore they may be recited only by a minyan. The synagogue does not replace the long-since destroyed Temple in Jerusalem.

Israelis use the Hebrew term Beyt Knesset (house of assembly). Jews of Ashkenazi descent have traditionally used the Yiddish term shul (cognate with the German Schule, school) in everyday speech. Sephardi Jews and Romaniote Jews generally use the term kal (from the Hebrew Ḳahal, meaning "community"). Spanish Jews call the synagogue a sinagoga and Portuguese Jews call it an esnoga. Persian Jews and some Karaite Jews also use the non-Hebrew term kenesa, which is derived from Aramaic, and some Arabic-speaking Jews use kenis. Reform and some Conservative Jews use the word "temple." The Greek word "synagogue" is a good all-around term, used in English (and German and French), to cover the preceding possibilities.[1] 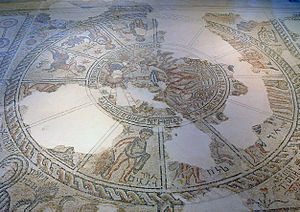 Mosaic in the Tzippori Synagogue 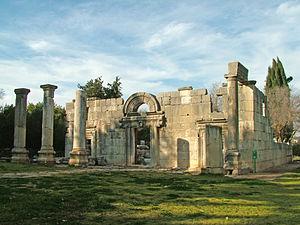 Ruins of the ancient synagogue of Kfar Bar'am

Although synagogues existed a long time before the destruction of the 2nd Temple in 70 CE, communal worship in the time while the Temple still stood centered around the korbanot ("sacrificial offerings") brought by the kohanim ("priests") in the Holy Temple. The all-day Yom Kippur service, in fact, was an event in which the congregation both observed the movements of the kohen gadol ("the high priest") as he offered the day's sacrifices and prayed for his success.

During the Babylonian captivity (586–537 BCE) the Men of the Great Assembly formalized and standardized the language of the Jewish prayers. Prior to that people prayed as they saw fit, with each individual praying in his or her own way, and there were no standard prayers that were recited. Rabbi Yohanan ben Zakkai, one of the leaders at the end of the Second Temple era, promulgated the idea of creating individual houses of worship in whatever locale Jews found themselves. This contributed to the continuity of the Jewish people by maintaining a unique identity and a portable way of worship despite the destruction of the Temple, according to many historians.

Synagogues in the sense of purpose-built spaces for worship, or rooms originally constructed for some other purpose but reserved for formal, communal prayer, however, existed long before the destruction of the Second Temple.[2] The earliest archaeological evidence for the existence of very early synagogues comes from Egypt, where stone synagogue dedication inscriptions dating from the 3rd century BCE prove that synagogues existed by that date.[3] A synagogue dating from between 75 and 50 BCE has been uncovered at a Hasmonean-era winter palace near Jericho.[4][5] More than a dozen Second Temple era synagogues have been identified by archaeologists.[2]

Any Jew or group of Jews can build a synagogue. Synagogues have been constructed by ancient Jewish kings, by wealthy patrons, as part of a wide range of human institutions including secular educational institutions, governments, and hotels, by the entire community of Jews living in a particular place, or by sub-groups of Jews arrayed according to occupation, ethnicity (i.e. the Sephardic, Polish or Persian Jews of a town), style of religious observance (i.e., a Reform or an Orthodox synagogue), or by the followers of a particular rabbi. 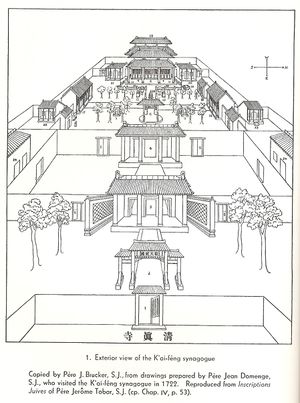 Aerial view of the synagogue of the Kaifeng Jewish community in China.

K.A.M. Isaiah Israel Temple in the Chicago neighborhood of Kenwood

There is no set blueprint for synagogues and the architectural shapes and interior designs of synagogues vary greatly. In fact, the influence from other local religious buildings can often be seen in synagogue arches, domes and towers.

Historically, synagogues were built in the prevailing architectural style of their time and place. Thus, the synagogue in Kaifeng, China looked very like Chinese temples of that region and era, with its outer wall and open garden in which several buildings were arranged. The styles of the earliest synagogues resembled the temples of other sects of the eastern Roman Empire. The surviving synagogues of medieval Spain are embellished with mudéjar plasterwork. The surviving medieval synagogues in Budapest and Prague are typical Gothic structures.

The emancipation of Jews in European countries not only enabled Jews to enter fields of enterprise from which they were formerly barred, but gave them the right to build synagogues without needing special permissions, synagogue architecture blossomed. Large Jewish communities wished to show not only their wealth but also their newly acquired status as citizens by constructing magnificent synagogues. These were built across Europe and in the United States in all of the historicist or revival styles then in fashion. Thus there were Neoclassical, Neo-Byzantine, Romanesque Revival, Moorish Revival, Gothic Revival, and Greek Revival. There are Egyptian Revival synagogues and even one Mayan Revival synagogue. In the 19th century and early 20th century heyday of historicist architecture, however, most historicist synagogues, even the most magnificent ones, did not attempt a pure style, or even any particular style, and are best described as eclectic. 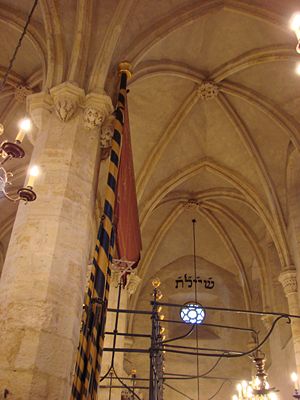 Gothic interior of the 13th-century Old New Synagogue of Prague 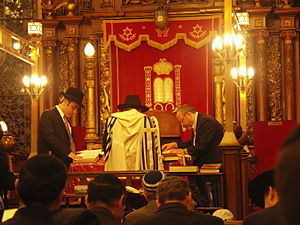 Bimah at the Bialystoker Synagogue with Torah Ark in background. 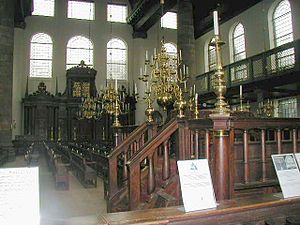 Interior of the Portuguese Synagogue (Amsterdam) showing Tebah in the foreground, and Torah Ark in the background. 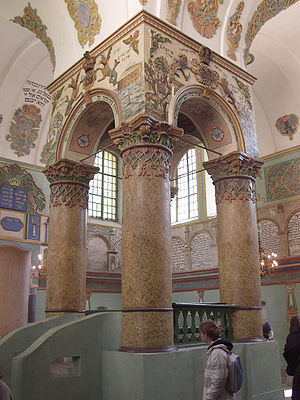 Bimah of the Łańcut Synagogue

All synagogues contain a bimah, a table from which the Torah is read, and a desk for the prayer leader.

The Torah Ark, (Hebrew: Aron Kodesh—ארון קודש) (called the heikhal—היכל [temple] by Sephardim) is a cabinet in which the Torah scrolls are kept.

The ark in a synagogue is almost always positioned in such a way such that those who face it are facing towards Jerusalem. Thus, sanctuary seating plans in the Western world generally face east, while those east of Israel face west. Sanctuaries in Israel face towards Jerusalem. Occasionally synagogues face other directions for structural reasons; in such cases, some individuals might turn to face Jerusalem when standing for prayers, but the congregation as a whole does not.

The Ark is reminiscent of the Ark of the Covenant which held the tablets inscribed with the Ten Commandments. This is the holiest spot in a synagogue, equivalent to the Holy of Holies. The Ark is often closed with an ornate curtain, the parochet פרוכת, which hangs outside or inside the ark doors.

A large, raised, reader's platform called the bimah (בימה) by Ashkenazim and tebah by Sephardim, where the Torah scroll is placed to be read is a feature of all synagogues. In Sephardi synagogues it is also used as the prayer leader's reading desk.

Other traditional features include a continually lit lamp or lantern, usually electric in contemporary synagogues, called the ner tamid (נר תמיד), the "Eternal Light", used as a reminder of the western lamp of the menorah of the Temple in Jerusalem, which remained miraculously lit perpetually. Many have an elaborate chair named for the prophet Elijah which is only sat upon during the ceremony of Brit milah. Many synagogues have a large seven-branched candelabrum commemorating the full Menorah. Most contemporary synagogues also feature a lectern for the rabbi.

A synagogue may be decorated with artwork, but in the Rabbinic and Orthodox tradition, three-dimensional sculptures and depictions of the human body are not allowed as these are considered akin to idolatry.

Until the 19th century, in an Ashkenazi synagogue, all seats most often faced the Torah Ark. In a Sephardi synagogue, seats were usually arranged around the perimeter of the sanctuary, but when the worshipers stood up to pray, everyone faced the Ark. In Ashkenazi synagogues, the Torah was read on a reader's table located in the center of the room, while the leader of the prayer service, the Hazzan, stood at his own lectern or table, facing the Ark. In Sephardic synagogues, the table for reading the Torah was commonly placed at the opposite side of the room from the Torah Ark, leaving the center of the floor empty for the use of a ceremonial procession carrying the Torah between the Ark and the reading table. 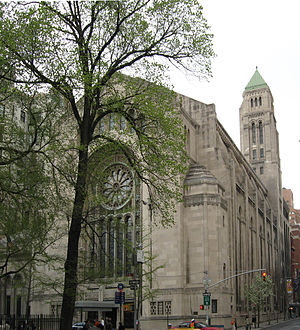 Orthodox synagogues feature a partition (mechitzah) dividing the men's and women's seating areas, or a separate women's section located on a balcony.

The German Reform movement which arose in the early 19th century made many changes to the traditional look of the synagogue, keeping with its desire to simultaneously stay Jewish yet be accepted by the host culture.

The first Reform synagogue, which opened in Hamburg in 1811, introduced changes that made the synagogue look more like a church. These included: the installation of an organ to accompany the prayers (even on Shabbat, when musical instruments are proscribed by halakha), a choir to accompany the Hazzan, and vestments for the synagogue rabbi to wear.[6]

In following decades, the central reader's table, the Bimah, was moved to the front of the Reform sanctuary—previously unheard-of[citation needed] in Orthodox synagogues. The rabbi now delivered his sermon from the front, much as the Christian ministers delivered their sermons in a church. The synagogue was renamed a "temple", to emphasize that the movement no longer looked forward to the rebuilding of the Temple in Jerusalem.[citation needed]

Synagogues often take on a broader role in modern Jewish communities and may include additional facilities such as a catering hall, kosher kitchen, religious school, library, day care center and a smaller chapel for daily services.

Since Orthodox Jews prefer to collect a minyan (a quorum of ten) rather than pray alone, they commonly assemble at pre-arranged times in offices, living rooms, or other spaces when these are more convenient than formal synagogue buildings. A room or building that is used this way can become a dedicated small synagogue or prayer room. Among Ashkenazi Jews they are traditionally called shtiebel (שטיבל, pl. shtiebelekh or shtiebels, Yiddish for "little house"), and are found in Orthodox communities worldwide.

Another type of communal prayer group, favored by some contemporary Jews, is the Chavurah (חבורה, pl. chavurot, חבורות), or prayer fellowship. These groups meet at a regular place and time, usually in a private home. In antiquity, the Pharisees lived near each other in chavurot and dined together to ensure that none of the food was unfit for consumption.[7] 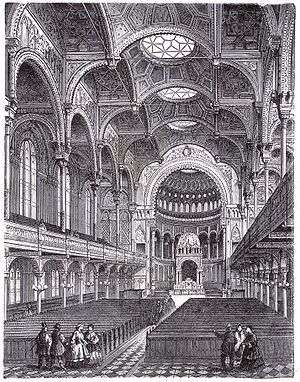 During the 19th and early 20th century, it was fairly common for Jewish communities, particularly in Europe, to construct very large, showpiece synagogues. These edifices were intended not simply to accommodate worshipers, but to serve as emblems of Jewish participation in modern society. For this purpose, they were built to be not merely large, but architecturally impressive. Even small cities had elaborate synagogues of this type, albeit smaller than the synagogues of Vienna and New York. They are often designated as The Great Synagogue of..., or, in Russia, The Choral Synagogue. These notable synagogues include: 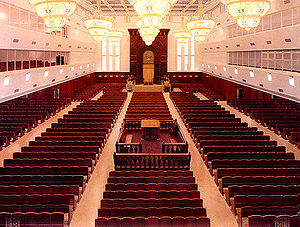 Interior of the Belz Great Synagogue in Jerusalem. 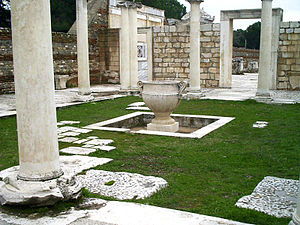 The Sardis Synagogue in Manisa, Turkey. The synagogue was a section of a large bath-gymnasium complex, which was in use for 450–500 years.

Fresco at the Dura-Europos synagogue, illustrating a scene from the Book of Esther, 244 CE.

Oldest synagogues in the United States 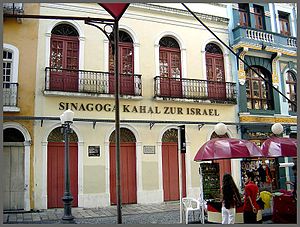 1636 - The Kahal Zur Israel Synagogue, located in Recife on the site of the oldest synagogue in the Americas. 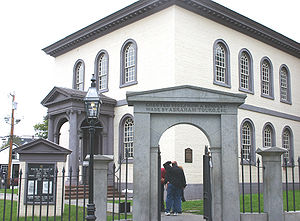 Touro Synagogue, the oldest surviving synagogue building in the U.S. 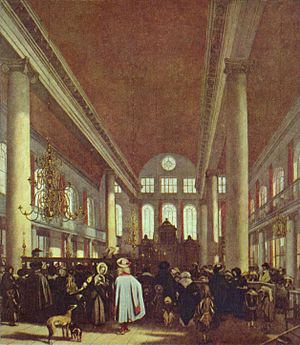 Painting of the interior of the Portuguese Synagogue (Amsterdam) by Emanuel de Witte (c. 1680)
Main article: Oldest synagogues in the United States