From Infogalactic: the planetary knowledge core
Jump to: navigation, search
For other uses, see System (disambiguation).

A system is a set of interacting or interdependent component parts forming a complex/intricate whole.[1] Every system is delineated by its spatial and temporal boundaries, surrounded and influenced by its environment, described by its structure and purpose and expressed in its functioning.

According to Marshall McLuhan,

In the 19th century the French physicist Nicolas Léonard Sadi Carnot, who studied thermodynamics, pioneered the development of the concept of a "system" in the natural sciences. In 1824 he studied the system which he called the working substance (typically a body of water vapor) in steam engines, in regards to the system's ability to do work when heat is applied to it. The working substance could be put in contact with either a boiler, a cold reservoir (a stream of cold water), or a piston (to which the working body could do work by pushing on it). In 1850, the German physicist Rudolf Clausius generalized this picture to include the concept of the surroundings and began to use the term "working body" when referring to the system.

The biologist Ludwig von Bertalanffy (1901-1972) became one of the pioneers of the general systems theory. In 1945 he introduced models, principles, and laws that apply to generalized systems or their subclasses, irrespective of their particular kind, the nature of their component elements, and the relation or 'forces' between them.[5]

Environment and boundaries
Systems theory views the world as a complex system of interconnected parts. We scope a system by defining its boundary; this means choosing which entities are inside the system and which are outside – part of the environment. We then make simplified representations (models) of the system in order to understand it and to predict or impact its future behavior. These models may define the structure and/or the behavior of the system.

Natural and human-made systems
There are natural and human-made (designed) systems. Natural systems may not have an apparent objective but their outputs can be interpreted as purposes. Human-made systems are made with purposes that are achieved by the delivery of outputs. Their parts must be related; they must be “designed to work as a coherent entity” – else they would be two or more distinct systems. 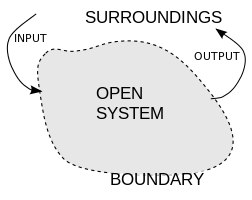 Open systems have input and output flows, representing exchanges of matter, energy or information with their surroundings.

Process and transformation process
An open system can also be viewed as a bounded transformation process, that is, a black box that is a process or collection of processes that transforms inputs into outputs. Inputs are consumed; outputs are produced. The concept of input and output here is very broad. E.g., an output of a passenger ship is the movement of people from departure to destination.

Subsystem
A subsystem is a set of elements, which is a system itself, and a component of a larger system.

System model
A system comprises multiple views. For the man-made systems it may be such views as concept, analysis, design, implementation, deployment, structure, behavior, input data, and output data views. A system model is required to describe and represent all these multiple views.

Evidently, there are many types of systems that can be analyzed both quantitatively and qualitatively. For example, with an analysis of urban systems dynamics, [A.W. Steiss][8] defines five intersecting systems, including the physical subsystem and behavioral system. For sociological models influenced by systems theory, where Kenneth D. Bailey[9] defines systems in terms of conceptual, concrete and abstract systems; either isolated, closed, or open, Walter F. Buckley[10] defines social systems in sociology in terms of mechanical, organic, and process models. Bela H. Banathy[11] cautions that with any inquiry into a system that understanding the type of system is crucial and defines Natural and Designed systems.

In offering these more global definitions, the author maintains that it is important not to confuse one for the other. The theorist explains that natural systems include sub-atomic systems, living systems, the solar system, the galactic system and the Universe. Designed systems are our creations, our physical structures, hybrid systems which include natural and designed systems, and our conceptual knowledge. The human element of organization and activities are emphasized with their relevant abstract systems and representations. A key consideration in making distinctions among various types of systems is to determine how much freedom the system has to select purpose, goals, methods, tools, etc. and how widely is the freedom to select itself distributed (or concentrated) in the system.

George J. Klir[12] maintains that no "classification is complete and perfect for all purposes," and defines systems in terms of abstract, real, and conceptual physical systems, bounded and unbounded systems, discrete to continuous, pulse to hybrid systems, etc. The interaction between systems and their environments are categorized in terms of relatively closed, and open systems. It seems most unlikely that an absolutely closed system can exist or, if it did, that it could be known by us. Important distinctions have also been made between hard and soft systems.[13] Hard systems are technical in nature and amenable to methods such as systems engineering, operations research and quantitative systems analysis. Soft systems involve people and organisations and are commonly associated with concepts developed by Peter Checkland and Brian Wilson through Soft Systems Methodology (SSM) involving methods such as action research and emphasizing participatory designs. Where hard systems might be identified as more "scientific," the distinction between them is actually often hard to define.

A cultural system may be defined as the interaction of different elements of culture. While a cultural system is quite different from a social system, sometimes both systems together are referred to as the sociocultural system. A major concern in the social sciences is the problem of order.

An economic system is a mechanism (social institution) which deals with the production, distribution and consumption of goods and services in a particular society. The economic system is composed of people, institutions and their relationships to resources, such as the convention of property. It addresses the problems of economics, like the allocation and scarcity of resources.

Application of the system concept

Systems modeling is generally a basic principle in engineering and in social sciences. The system is the representation of the entities under concern. Hence inclusion to or exclusion from system context is dependent of the intention of the modeler.

Systems in information and computer science

In computer science and information science, system is a software system which has components as its structure and observable inter-process communications as its behavior. Again, an example will illustrate: There are systems of counting, as with Roman numerals, and various systems for filing papers, or catalogues, and various library systems, of which the Dewey Decimal System is an example. This still fits with the definition of components which are connected together (in this case in order to facilitate the flow of information).

System can also be used referring to a framework, be it software or hardware, designed to allow software programs to run, see platform.

Systems in engineering and physics

In engineering and physics, a physical system is the portion of the universe that is being studied (of which a thermodynamic system is one major example). Engineering also has the concept of a system that refers to all of the parts and interactions between parts of a complex project. Systems engineering refers to the branch of engineering that studies how this type of system should be planned, designed, implemented, built, and maintained.

Systems in social and cognitive sciences and management research

Social and cognitive sciences recognize systems in human person models and in human societies. They include human brain functions and human mental processes as well as normative ethics systems and social/cultural behavioral patterns.

Systems thinking is a style of thinking/reasoning and problem solving. It starts from the recognition of system properties in a given problem. It can be a leadership competency. Some people can think globally while acting locally. Such people consider the potential consequences of their decisions on other parts of larger systems. This is also a basis of systemic coaching in psychology.

Organizational theorists such as Margaret Wheatley have also described the workings of organizational systems in new metaphoric contexts, such as quantum physics, chaos theory, and the self-organization of systems.

There is also such a thing as a logical system. The most obvious example is the calculus developed simultaneously by Leibniz and Isaac Newton. Another example is George Boole's Boolean operators. Other examples have related specifically to philosophy, biology, or cognitive science. Maslow's Hierarchy of Needs applies psychology to biology by using pure logic.[disambiguation needed] Numerous psychologists, including Carl Jung and Sigmund Freud have developed systems which logically organize psychological domains, such as personalities, motivations, or intellect and desire. Often these domains consist of general categories following a Corollary such as a Theorem. Logic has been applied to categories such as Taxonomy, Ontology, Assessment[disambiguation needed], and Hierarchies.

In 1988, military strategist, John A. Warden III introduced his Five Ring System model in his book, The Air Campaign contending that any complex system could be broken down into five concentric rings. Each ring—Leadership, Processes, Infrastructure, Population and Action Units—could be used to isolate key elements of any system that needed change. The model was used effectively by Air Force planners in the First Gulf War.[14][15][16] In the late 1990s, Warden applied this five ring model to business strategy.[17]