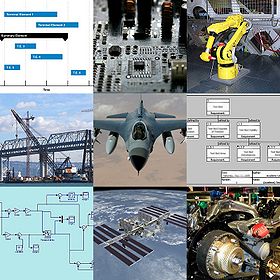 Systems engineering is an interdisciplinary field of engineering that focuses on how to design and manage complex engineering systems over their life cycles. Issues such as requirements engineering, reliability, logistics, coordination of different teams, testing and evaluation, maintainability and many other disciplines necessary for successful system development, design, implementation, and ultimate decommission become more difficult when dealing with large or complex projects. Systems engineering deals with work-processes, optimization methods, and risk management tools in such projects. It overlaps technical and human-centered disciplines such as control engineering, industrial engineering, software engineering, organizational studies, and project management. Systems engineering ensures that all likely aspects of a project or system are considered, and integrated into a whole. 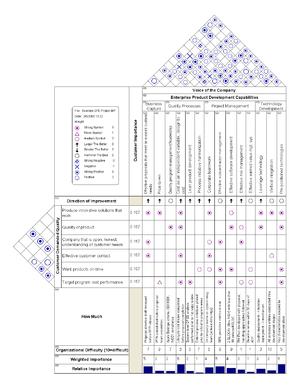 The term systems engineering can be traced back to Bell Telephone Laboratories in the 1940s.[1] The need to identify and manipulate the properties of a system as a whole, which in complex engineering projects may greatly differ from the sum of the parts' properties, motivated various industries, especially those developing systems for the U.S. Military, to apply the discipline.[2]

When it was no longer possible to rely on design evolution to improve upon a system and the existing tools were not sufficient to meet growing demands, new methods began to be developed that addressed the complexity directly.[3] The continuing evolution of systems engineering comprises the development and identification of new methods and modeling techniques. These methods aid in the better comprehension and the design and development control of engineering systems as they grow more complex. Popular tools that are often used in the systems engineering context were developed during these times, including USL, UML, QFD, and IDEF0.

The traditional scope of engineering embraces the conception, design, development, production and operation of physical systems. Systems engineering, as originally conceived, falls within this scope. "Systems engineering", in this sense of the term, refers to the distinctive set of concepts, methodologies, organizational structures (and so on) that have been developed to meet the challenges of engineering effective functional systems of unprecedented size and complexity within time, budget, and other constraints. The Apollo program is a leading example of a systems engineering project.

The use of the term "systems engineer" has evolved over time to embrace a wider, more holistic concept of "systems" and of engineering processes. This evolution of the definition has been a subject of ongoing controversy,[11] and the term continues to apply to both the narrower and broader scope.

Systems engineering focuses on analyzing and eliciting customer needs and required functionality early in the development cycle, documenting requirements, then proceeding with design synthesis and system validation while considering the complete problem, the system lifecycle. This includes fully understanding all of the stakeholders involved. Oliver et al. claim that the systems engineering process can be decomposed into

Within Oliver's model, the goal of the Management Process is to organize the technical effort in the lifecycle, while the Technical Process includes assessing available information, defining effectiveness measures, to create a behavior model, create a structure model, perform trade-off analysis, and create sequential build & test plan.[15]

Depending on their application, although there are several models that are used in the industry, all of them aim to identify the relation between the various stages mentioned above and incorporate feedback. Examples of such models include the Waterfall model and the VEE model.[16]

System development often requires contribution from diverse technical disciplines.[17] By providing a systems (holistic) view of the development effort, systems engineering helps mold all the technical contributors into a unified team effort, forming a structured development process that proceeds from concept to production to operation and, in some cases, to termination and disposal. In an acquisition, the holistic integrative discipline combines contributions and balances tradeoffs among cost, schedule, and performance while maintaining an acceptable level of risk covering the entire life cycle of the item.[18]

This perspective is often replicated in educational programs, in that systems engineering courses are taught by faculty from other engineering departments, which helps create an interdisciplinary environment.[19][20]

The need for systems engineering arose with the increase in complexity of systems and projects,[21][22] in turn exponentially increasing the possibility of component friction, and therefore the unreliability of the design. When speaking in this context, complexity incorporates not only engineering systems, but also the logical human organization of data. At the same time, a system can become more complex due to an increase in size as well as with an increase in the amount of data, variables, or the number of fields that are involved in the design. The International Space Station is an example of such a system. 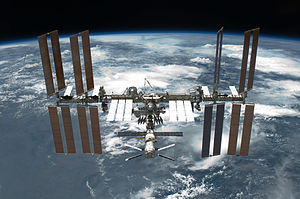 The International Space Station is an example of a largely complex system requiring Systems Engineering.

The development of smarter control algorithms, microprocessor design, and analysis of environmental systems also come within the purview of systems engineering. Systems engineering encourages the use of tools and methods to better comprehend and manage complexity in systems. Some examples of these tools can be seen here:[23]

Taking an interdisciplinary approach to engineering systems is inherently complex since the behavior of and interaction among system components is not always immediately well defined or understood. Defining and characterizing such systems and subsystems and the interactions among them is one of the goals of systems engineering. In doing so, the gap that exists between informal requirements from users, operators, marketing organizations, and technical specifications is successfully bridged. 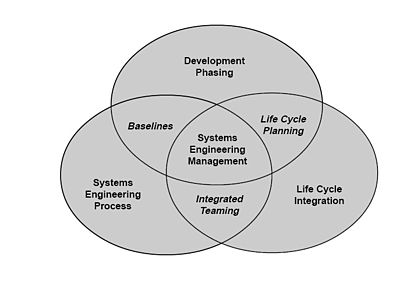 The scope of systems engineering activities[24]

One way to understand the motivation behind systems engineering is to see it as a method, or practice, to identify and improve common rules that exist within a wide variety of systems.[citation needed] Keeping this in mind, the principles of systems engineering – holism, emergent behavior, boundary, et al. – can be applied to any system, complex or otherwise, provided systems thinking is employed at all levels.[25] Besides defense and aerospace, many information and technology based companies, software development firms, and industries in the field of electronics & communications require systems engineers as part of their team.[26]

An analysis by the INCOSE Systems Engineering center of excellence (SECOE) indicates that optimal effort spent on systems engineering is about 15-20% of the total project effort.[27] At the same time, studies have shown that systems engineering essentially leads to reduction in costs among other benefits.[27] However, no quantitative survey at a larger scale encompassing a wide variety of industries has been conducted until recently. Such studies are underway to determine the effectiveness and quantify the benefits of systems engineering.[28][29]

Systems engineering encourages the use of modeling and simulation to validate assumptions or theories on systems and the interactions within them.[30][31]

Use of methods that allow early detection of possible failures, in safety engineering, are integrated into the design process. At the same time, decisions made at the beginning of a project whose consequences are not clearly understood can have enormous implications later in the life of a system, and it is the task of the modern systems engineer to explore these issues and make critical decisions. No method guarantees today's decisions will still be valid when a system goes into service years or decades after first conceived. However, there are techniques that support the process of systems engineering. Examples include soft systems methodology, Jay Wright Forrester's System dynamics method, and the Unified Modeling Language (UML)—all currently being explored, evaluated, and developed to support the engineering decision process.

INCOSE maintains a continuously updated Directory of Systems Engineering Academic Programs worldwide.[5] As of 2009, there are about 80 institutions in United States that offer 165 undergraduate and graduate programs in systems engineering. Education in systems engineering can be taken as Systems-centric or Domain-centric.

Both of these patterns strive to educate the systems engineer who is able to oversee interdisciplinary projects with the depth required of a core-engineer.[33]

Systems engineering tools are strategies, procedures, and techniques that aid in performing systems engineering on a project or product. The purpose of these tools vary from database management, graphical browsing, simulation, and reasoning, to document production, neutral import/export and more.[34]

There are many definitions of what a system is in the field of systems engineering. Below are a few authoritative definitions:

Depending on their application, tools are used for various stages of the systems engineering process:[24] 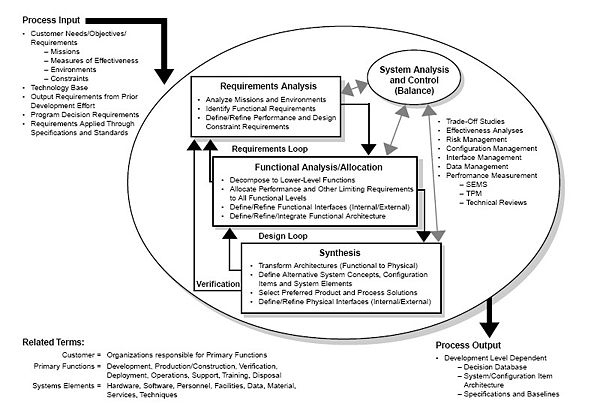 Models play important and diverse roles in systems engineering. A model can be defined in several ways, including:[41]

Together, these definitions are broad enough to encompass physical engineering models used in the verification of a system design, as well as schematic models like a functional flow block diagram and mathematical (i.e., quantitative) models used in the trade study process. This section focuses on the last.[41]

The main reason for using mathematical models and diagrams in trade studies is to provide estimates of system effectiveness, performance or technical attributes, and cost from a set of known or estimable quantities. Typically, a collection of separate models is needed to provide all of these outcome variables. The heart of any mathematical model is a set of meaningful quantitative relationships among its inputs and outputs. These relationships can be as simple as adding up constituent quantities to obtain a total, or as complex as a set of differential equations describing the trajectory of a spacecraft in a gravitational field. Ideally, the relationships express causality, not just correlation.[41] Furthermore, key to successful systems engineering activities are also the methods with which these models are efficiently and effectively managed and used to simulate the systems. However, diverse domains often present recurring problems of modeling and simulation for systems engineering, and new advancements are aiming to crossfertilize methods among distinct scientific and engineering communities, under the title of 'Modeling & Simulation-based Systems Engineering'.[42]

Initially, when the primary purpose of a systems engineer is to comprehend a complex problem, graphic representations of a system are used to communicate a system's functional and data requirements.[43] Common graphical representations include:

A graphical representation relates the various subsystems or parts of a system through functions, data, or interfaces. Any or each of the above methods are used in an industry based on its requirements. For instance, the N2 chart may be used where interfaces between systems is important. Part of the design phase is to create structural and behavioral models of the system.

Once the requirements are understood, it is now the responsibility of a systems engineer to refine them, and to determine, along with other engineers, the best technology for a job. At this point starting with a trade study, systems engineering encourages the use of weighted choices to determine the best option. A decision matrix, or Pugh method, is one way (QFD is another) to make this choice while considering all criteria that are important. The trade study in turn informs the design, which again affects graphic representations of the system (without changing the requirements). In an SE process, this stage represents the iterative step that is carried out until a feasible solution is found. A decision matrix is often populated using techniques such as statistical analysis, reliability analysis, system dynamics (feedback control), and optimization methods.