Not to be confused with TNT (TV channel), an unrelated TV network.

TNT Airways, a subsidiary of TNT Express, is a cargo and (since 2004) passenger airline, operating chartered flights to mainly European destinations. The airline was founded in 1999 and has its head office in Liège, Belgium, on the grounds of Liège Airport, its hub.[2]

1999 TNT Airways is founded and incorporated in Belgium. AOC and Air Transport License application with the Belgian Authorities.

2001 TRTO (Type Rating Training Organization) approvals allowing in-house crew training for the A300, BAe146 and extended to training of instructors and examiners. Recognized as Scheduled Operator by Belgian Authorities.

2002 US Department of Transport and FAA approval to conduct operation with inter-modal capability between the US and Belgium. License by Liege Airport Company (SAB) to provide ramp handling services to 3rd party carriers whether passenger or cargo operators. TRTO approval extended to include the Boeing 747-400ERF. Code share agreement with China Southern for a daily Boeing 747 freighter service between Liege, Shanghai and Shenzhen.

2010 TNT expends its long haul network with a five-day-per-week air cargo service linking Moscow and its main European hub Liege as well as with a direct flight between Chongqing and Liège. The same year, the company introduces three Boeing 777s in his fleet (delivery in 2011)

2011 In January, the two divisions, TNT Post and TNT Express, split to create two separate companies. The split is effective from the 1st of May 2011.

2012 TNT Airways and Emirates SkyCargo expand their cooperation by signing a code-share and blocked-space agreement. Emirates SkyCargo will place its airline code and use space on TNT Airways' 777 freighter flights on the New York JFK to Liege and Hong Kong-Dubai-Liege routes. 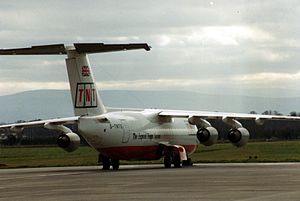 An Air Foyle BAe 146-300 cargo airliner at Dublin Airport, operating a flight on behalf of TNT. At that time (1993), TNT had not set up an in-house airline yet. Today, this airplane belongs to TNT Airways. 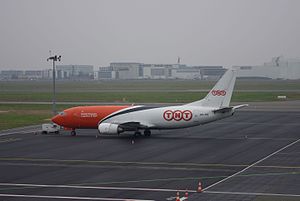 As of November 2015, the TNT Airways fleet consists of the following aircraft:[3]

Additionally, there are several aircraft of other airlines that have been contracted to operate on behalf of TNT Express.[citation needed]