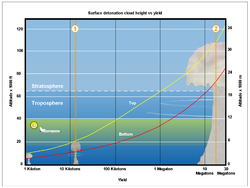 TNT equivalent is a convention for expressing energy, typically used to describe the energy released in an explosion. The "ton of TNT" is a unit of energy defined by that convention to be 4.184 gigajoules,[1] which is the approximate energy released in the detonation of a metric ton (1,000 kilograms or one megagram) of TNT. The convention intends to compare the destructiveness of an event with that of conventional explosive materials, of which TNT is a typical example, although other conventional explosives such as dynamite contain more energy.

Historical derivation of the value

A gram of TNT releases 2673–6702 J (joules) upon explosion.[3] The energy liberated by one gram of TNT was arbitrarily defined as a matter of convention to be 4184 J,[4] which is exactly one kilocalorie.

An explosive's energy is normally expressed as the thermodynamic work produced by its detonation, which for TNT has been accurately measured as 4686 J/g from a large sample of air blast experiments, and theoretically calculated to be 4853 J/g.[5]

The measured, pure heat output of a gram of TNT is only 2724 J,[6][clarification needed] but this is not the important value for explosive blast effect calculations.

Alternative TNT equivalency can be calculated as a function of when in the detonation the value is measured and which property is being compared.[7][8][9][10]

Conversion to other units

The relative effectiveness factor (RE factor), relates an explosive's demolition power to that of TNT, in units of the TNT equivalent/kg (TNTe/kg). The RE factor is the relative mass of TNT to which an explosive is equivalent: The greater the RE, the more powerful the explosive.

*: TBX (thermobaric explosives) or EBX (enhanced blast explosives), in a small, confined space, may have over twice the power of destruction. The total power of aluminized mixtures strictly depends on the condition of explosions.