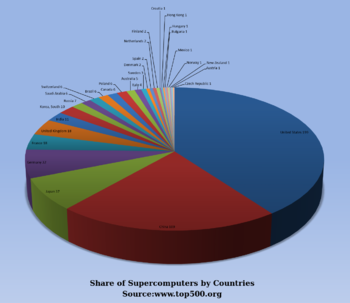 The TOP500 project ranks and details the 500 most powerful (non-distributed) computer systems in the world. The project was started in 1993 and publishes an updated list of the supercomputers twice a year. The first of these updates always coincides with the International Supercomputing Conference in June, and the second is presented in November at the ACM/IEEE Supercomputing Conference. The project aims to provide a reliable basis for tracking and detecting trends in high-performance computing and bases rankings on HPL,[1] a portable implementation of the high-performance LINPACK benchmark written in Fortran for distributed-memory computers. 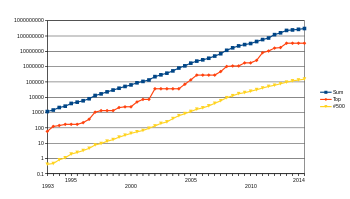 In the early 1990s, a new definition of supercomputer was needed to produce meaningful statistics. After experimenting with metrics based on processor count in 1992, the idea was born at the University of Mannheim to use a detailed listing of installed systems as the basis. In early 1993, Jack Dongarra was persuaded to join the project with his LINPACK benchmark. A first test version was produced in May 1993, partially based on data available on the Internet, including the following sources:[2][3]

The information from those sources was used for the first two lists. Since June 1993, the TOP500 is produced bi-annually based on site and vendor submissions only.

As of November 2015[update], TOP500 supercomputers are mostly based on x86-64 CPUs (Intel EMT64 and AMD AMD64 instruction set architecture), with few exceptions (all RISC-based) including 39 supercomputers based on Power Architecture used by IBM POWER microprocessors, seven SPARC (all Fujitsu/SPARC-based, one of which surprisingly made the top in 2011 without a GPU, currently ranked fourth), and one ShenWei-based (ranked 11 in 2011, ranked 65th in November 2014) making up the remainder. Prior to the ascendance of 32-bit x86 and later 64-bit x86-64 in the early 2000s, a variety of RISC processor families made up the majority of TOP500 supercomputers, including RISC architectures such as SPARC, MIPS, PA-RISC and Alpha.

In recent years heterogeneous computing, mostly using Nvidia's graphics processing units (GPU) as coprocessors, has become a popular way to reach a better performance per watt ratio and higher absolute performance; it is almost required for good performance and to make the top (or top 10), with some exceptions, such as the mentioned SPARC computer without any coprocessors. A x86-based coprocessor, Xeon Phi, has also been used. 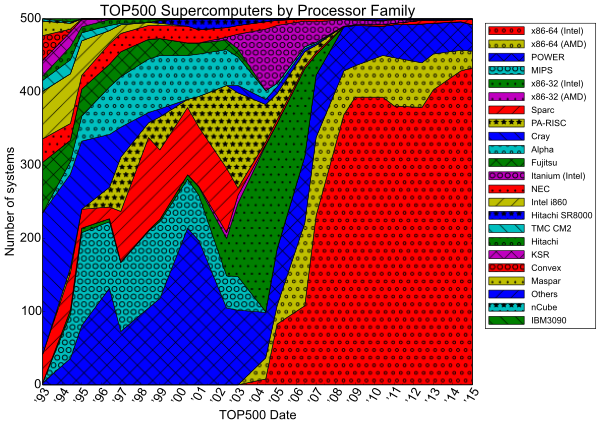 The non-Linux computers on the list – the six AIX ones – are all running on POWER7 (highest one ranked 208th[9]). Those are made by IBM (except for one ranked 418th by Hitachi[10]). IBM has higher ranked computers running Linux.

Numbers below represent the number of computers in the TOP500 that are in each of the listed countries.

In November 2014, it was announced that the United States was developing two new supercomputers to dethrone China's Tianhe-2 from its position as world's fastest supercomputer. The two computers, Sierra and Summit, will each exceed Tianhe-2's 55 peak petaflops. Summit, the more powerful of the two, will deliver 150-300 peak petaflops.[17] On 10 April 2015, US government agencies banned Intel Corporation from providing Xeon chips to China under the fear that China would use the chips to help conduct nuclear research.[18]

On 29 July, 2015, President Obama signed an executive order creating a National Strategic Computing Initiative calling for the accelerated development of an exascale (1000 petaflop) system and funding research into post-semiconductor computing.[19]

A few machines that have not been benchmarked are not eligible for the list, such as NCSA's Blue Waters. Additional purpose-built machines that are not capable or do not run the benchmark were not included, such as RIKEN MDGRAPE-3 and MDGRAPE-4.

IBM Roadrunner[20] is no longer on the list (or any other using the Cell coprocessor, or PowerXCell as in the Roadrunner supercomputer), but it is an example of a computer that would easily be included, if it had not been decommissioned, as it is faster than the one ranked 500th.[21]

Conversely, computers, such as the Windows Azure,[22] have dropped off the list simply because the stated performance numbers are no longer high enough, while theoretically the computers could have been upgraded to get faster (or not) without being reported.

All Itanium based systems (including the one which reached second rank in 2004[23])[24] and vector processors (NEC-based such as the Earth simulator that was fastest in 2002[25]) have also fallen off the list. Similarly the Sun Starfire computers that occupied many spots have been overtaken.