TOS-1 (Russian: ТОС-1 – тяжёлая огнемётная система, English: Heavy Flamethrower System) is a Soviet 220mm 30-barrel (original system, Ob.634 or TOS-1M) or 24-barrel (Ob.634B or TOS-1A) multiple rocket launcher and thermobaric weapon mounted on a T-72 tank chassis. TOS-1 was designed for defeating enemy personnel in fortifications, in open country, and in lightly armoured vehicles and transport. First combat tests took place in 1988–1989 in the Panjshir Valley during the Soviet war in Afghanistan. The TOS-1 was shown for the first time in public in 1999 in Omsk.

The TOS-1 is not used by the artillery units of the Russian Armed Forces but is found in NBC defense units (Russian: войскa радиационной, химической и биологической защиты (РХБЗ)).[2]

The idea of a heavy short-range MLRS to launch rockets equipped with incendiary and thermobaric warheads arose in the late 1970s. The combat system consisting of the combat vehicle, rockets, and loading vehicle was developed in early 1980s at KBTM in Omsk and was named TOS-1, remaining a secret development for a long time.

The TOS-1 is intended to engage military personnel, equipment, and buildings, including fortified constructions. The combat vehicle acts within the combat order of infantry and tanks. The large mass of the launcher and the need for a high-level of protection (due to the relatively short range of 3,500 m (11,500 ft)) helped determine the use of the chassis of the T-72 main battle tank. The TZM reloading vehicle was built on the chassis of a KrAZ-255B cross-country truck and equipped with a crane for loading/unloading of the launcher.

In 2001, the improved TOS-1A system entered service. The improved system's range has been extended to 6 kilometers and its ballistic computer has been upgraded.

The nickname Buratino originates with the name of the hero of a Russian retelling of the Pinocchio tale (by Alexey Tolstoy), given the perception of the big "nose" of the launcher.

TOS-1s were first used in combat in Afghanistan’s Panjshir valley by the Soviet Union. Later, they were prominently used in the Battle of Grozny in 1999 by the Russian Army.

TOS-1As were first used in combat in Iraq in the recapture of Jurf Al Sakhar on October 24, 2014 from ISIL forces.[3]

The OSCE reported in September 2015 that the TOS-1 was sighted in a rebel training area in eastern Ukraine.[4]

TOS-1 was used in Syria on October 10, 2015 by Syrian Army forces against rebel forces in Hama. 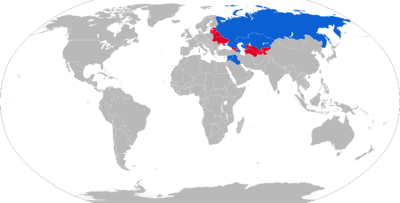 Map with TOS-1 operators in blue