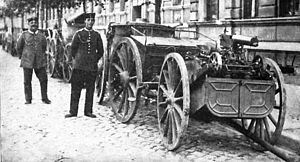 The tachanka (Russian: тача́нка) was a horse-drawn machine gun platform, usually a cart or an open wagon with a heavy machine gun installed in the back. A tachanka could be pulled by two to four horses and required a crew of two or three (one driver and a machine gun crew). A number of sources attribute its invention to Nestor Makhno.[1][2][3][4][5][6] 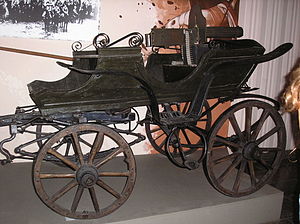 Tachanka armed with a PM M1910 in the Huliaipole museum

There are at least two plausible hypotheses about origin of the word tachanka. The etymological dictionary of Vasmer suggests that the word derives from Ukrainian netychanka ("нетичанка"), Polish najtyczanka, a type of a carriage named after the town of Neutitschein, now Nový Jičín in the Czech Republic.[7] According to another opinion, it is a Ukrainian diminutive, or endearing form of the word tachka (Russian: та́чка, meaning 'wheelbarrow'). Still another opinion is that it is a contracted word 'tavrichanka' for rugged carriages known in Southern Ukraine and Crimea, derived from the name "Taurida" for this area.[citation needed] However the latter derivation is dubious because the 'tavrichanka', a large, rugged agricultural carriage, is of completely different design.

A regular civilian horse cart could be easily converted to military use and back. This made the tachanka very popular during the Great War on the Eastern Front, where it was used by the Russian cavalry.[citation needed] The use of tachankas reached its peak during the Russian Civil War (1917–1920s), particularly in the peasant regions of Southern Russia and Ukraine, where the fronts were fluid and mobile warfare gained much significance. With up to 4 horses abreast pulling a tachanka, it could easily keep up with cavalry units and support them with mobile firepower.

Tachanka tactics were centered around taking advantage of its speed to surprise the enemy. Tachankas, before the introduction of the tank or automobile to the battlefield, were the only way to provide high-speed mobility for the heavy, bulky machine guns of World War I. The speed of the horse-drawn cart would be used to move the machine gun platform to a favorable firing position, and then the enemy would be fired upon before they had a chance to react. Since the machine gun pointed towards the rear of the cart, the tachankas also provided effective suppressive fire onto pursuing enemy cavalry after raids and during retreats. Leader of anarchist forces during the Russian civil war, Nestor Makhno pioneered the use of the tachanka en masse. Makhno's forces relied so heavily upon the use of the tachanka that one Makhnovite referred to himself and his fellow troops as "a republic on tachanki".[8] The Revolutionary Insurrectionary Army of Ukraine used tachankas mainly against enemy cavalry. Makhnovists also used tachankas to transport infantry, thus improving mobility of the army (about 100 km each day). Tachankas soon became used by the Red Army, with the famous example of Vasily Chapayev.

Later, it was adopted by a number of armies, notably the Polish Army which used it during the Polish-Soviet War. Initially mostly improvised, with time the Polish Army also adopted two models of factory-made taczankas, as they were called in Poland. They were used during the Invasion of Poland of 1939 to provide cavalry squadron support. They were attached to every cavalry HMG squadron and HMG company of infantry.

Despite a certain degree of standardisation, the tachanka's armament was, in most cases, improvised. In Russia, the PM M1910 was often used. The Polish cavalry of the Polish-Soviet War often used all kinds of machine guns available, including the Maxim, Schwarzlose MG M.07/12, Hotchkiss machine gun and Browning machine gun. The late models of standardised tachankas of the Polish Army were all equipped with Ckm wz.30, a Polish modification of the M1917 Browning machine gun which was also suitable for anti-air fire.

One of the songs glorifying the Red Army during the Russian Civil War was called "Tachanka". The concluding lyrics, roughly translated, run:[9]

And to this day, the foe has nightmares
Of the thick rain of lead,
The battle-chariot
And the young machine gunner.

Tachankas can be seen in the classic Soviet films Chapayev and The Burning Miles.