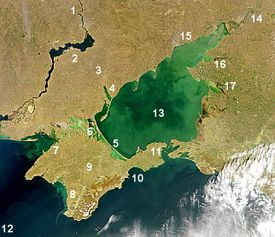 Satellite image of the Azov Sea area, with the Taganrog Bay marked as 15. 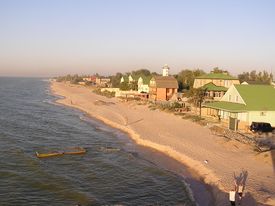 The coast of the bay, with Bilosarayska Spit.

Taganrog Bay or Tahanrih Bay (Russian: Таганрогский залив, Ukrainian: Таганрозька затока) is the northeastern arm of the Sea of Azov. It also may be perceived as a flooded estuary of the Don River.

The bay serves as a natural boundary between the Kuban coast line in Russia and the northern Azov littoral region in Ukraine and Russia. Since the fall of the Soviet Union, the international boundary here hasn't been established.

At its northeast end is the mouth of the Don River. Length: about 140 kilometres (87 mi), width at the mouth: 31 kilometres (19 mi), median depth: about 5 metres (16 ft). It may freeze some winters from December to March.

Two other rivers, the Kalmius and the Mius, flow into the bay. The flow of water into the bay is the chief factor for current development in the Sea of Azov.[1] 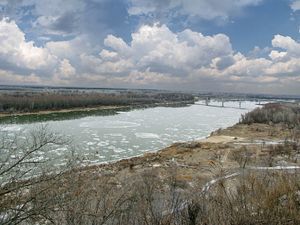 The Don River in December 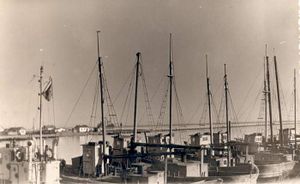 Its mouth is marked by the Dolgaya Spit on the south and the Bilosaray Spit (Bilosarayska Spit) on the north. It abounds in sandy spits that partly enclose shallow bays. The bay contains "Sandy Isles" (Песчаные острова, Пісчані острови). Rivers Don, Kalmius, Mius and Yeya drain into the Taganrog Bay Basin.

The major ports are Taganrog, Mariupol (Ukraine), and Yeysk. Rostov-on-Don is a few miles up the Don river.

The concentration of salt water in the Gulf is uneven. East, the most shallow part of the bay, which receives water directly to Don desalinized, and the western most osolonena, as is often subjected to the direct effects of Azov water. Taganrog Yeisk in Russia and Mariupol in the Ukraine are the main ports of Taganrog Bay.

One strange phenomenon is the presence of both fresh and salt water in the bay. The water in the eastern and shallower part of the bay, which receives water from the Don River, is mostly desalinized. The western end of the bay is completely salt water.[1]