From Infogalactic: the planetary knowledge core
Jump to: navigation, search
This article is about the visual design element ☯. For the symbolic meaning of the "supreme ultimate diagrams" in earlier Chinese philosophy and Taoism, see Wuji (philosophy) and Yin and yang. For the "supreme ultimate" or "primordial universe" in later Neo-Confucianist cosmology, see Taiji (philosophy). 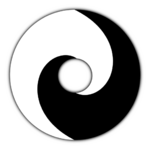 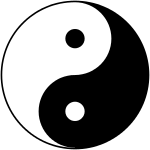 The modern Daoist canon, compiled during the Ming era, has at least half a dozen variants of such taijitu. The two most similar are the "Taiji Primal Heaven" (太極先天圖 tàijí xiāntiān tú) and the "wuji" (無極圖 wújí tú) diagrams, both of which have been extensively studied during the Qing period for their possible connection with Zhou Dunyi's taijitu.[1]

Ming period author Lai Zhide (1525–1604) simplified the taijitu to a design of two interlocking spirals. In the Ming era, the combination of the two interlocking spirals of the taijitu with two black-and-white dots superimposed on them became identified with the He tu or "Yellow River diagram" (河圖). It is this version that has been widely popularised as the "yin-yang symbol" in the West since the 1960s.[2] The contemporary Chinese term for the modern symbol is 太极兩儀图 "two-part Taiji diagram".

Ornamental patterns with visual similarity to the "yin-yang symbol" are found in archaeological artefacts of European prehistory; such designs are sometimes descriptively dubbed "yin yang symbols" in archaeological literature by modern scholars.[3][4][5]

The tujitu consists of five parts. Strictly speaking the "yin and yang symbol", itself popularly called tujitu, represents the second of these five parts of the diagram.

), but it may refer to any of several schematic diagrams that contain at least one circle with an inner pattern of symmetry representing yin and yang.

While the concept of yin and yang dates to Chinese antiquity,[6] the interest in "diagrams" (圖 tú) is an intellectual fashion of Neo-Confucianism during the Song period (11th century), and it declined again in the Ming period, by the 16th century.[7]

The original description of a taijitu is due to Song era philosopher Zhou Dunyi (1017–1073), author of the Taijitu shuo 太極圖說 "Explanation of the Diagram of the Supreme Ultimate", which became the cornerstone of Neo-Confucianist cosmology. His brief text synthesized aspects of Chinese Buddhism and Taoism with metaphysical discussions in the Yijing.

Zhou's key terms Wuji and Taiji appear in the opening line 無極而太極, which Adler notes could also be translated "The Supreme Polarity that is Non-Polar".

Instead of usual Taiji translations "Supreme Ultimate" or "Supreme Pole", Adler uses "Supreme Polarity" (see Robinet 1990) because Zhu Xi describes it as the alternating principle of yin and yang, and …

insists that taiji is not a thing (hence "Supreme Pole" will not do). Thus, for both Zhou and Zhu, taiji is the yin-yang principle of bipolarity, which is the most fundamental ordering principle, the cosmic "first principle." Wuji as "non-polar" follows from this.

Since the 12th century, there has been a vigorous discussion in Chinese philosophy regarding the ultimate origin of Zhou Dunyi's diagram. Zhu Xi (12th century) insists that Zhou Dunyi had composed the diagram himself, against the prevailing view that he had received it from Daoist sources. Zhu Xi could not accept a Daoist origin of the design, because it would have undermined the claim of uniqueness attached to the Neo-Confucian concept of dao.[7] 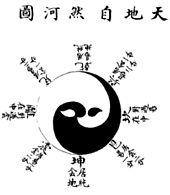 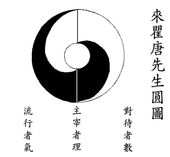 While Zhou Dunyi's (1017–1073) popularized the circular diagram,[9] the introduction of "swirling" patterns first appears in the Ming period.

Zhao Huiqian (趙撝謙, 1351–1395) was the first to introduce the "swirling" variant of the taijitu in his Liushu benyi (六書本義, 1370s). The diagram is combined with the eight trigrams (bagua) and called the "River Chart spontaneously generated by Heaven and Earth". By the end of the Ming period, this diagram had become an widespread representation of Chinese cosmology.[10]

Lai Zhide's design is similar to the gakyil (dga' 'khyil or "wheel of joy") symbols of Tibetan Buddhism; but while the Tibetan designs have three or four swirls (representing the Three Jewels or the Four Noble Truths, i.e. as a triskele and a tetraskele design), Lai Zhide's taijitu has two swirls, terminating in a central circle.[11]

The Ming-era design of the taijitu of two interlocking spirals has been reported as "yin-yang symbol" in the first half of the 20th century. The flag of South Korea, originally introduced as the flag of Joseon era Korea in 1882, shows this symbol in red and blue. This was a modernisation of the older (early 19th century) form of the Bat Quai Do used as the Joseon royal standard.

Since the 1960s, "yin-yang symbol" is most widely applied to the He tu symbol which combines the two interlocking spirals with two dots. In the standard form of the contemporary "yin-yang symbol", one draws on the diameter of a circle two non-overlapping circles each of which has a diameter equal to the radius of the outer circle. One keeps the line that forms an "S," and one erases or obscures the other line.[12] The design is also described[according to whom?][year needed] "pair of fishes nestling head to tail against each other".[13]

The modern symbol has also been widely used in martial arts, particularly t'ai chi ch'uan (Taijiquan),[14] and Jeet Kune Do, since the 1970s.[15] In this context, it is generally used to represent the interplay between hard and soft techniques.

The dots in the modern "yin-yang symbol" have been given the additional interpretation of "intense interaction" between the complementary principles. [16] 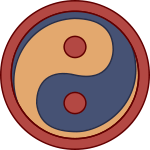 As discussed above, a modern form of the "ying yang symbol" is by no means representative of graphical representations of tajitu prior to the 19th century, but it has become widely recognizable, and the term is also used for unrelated designs dividing a circle by an "S"-shape. Such unrelated designs are widespread, and are found, for example, in artefacts of the European Neolithic. Such similarities have notably been used to illustrate a supposed "similarity of Tripilja culture and the culture of ancient China" in the Ukraine pavilion at the Expo 2010 in Shanghai, China.[19] The "interlocking comma" design is also found in artefacts of the European Iron Age, popularly dubbed "Celtic yin-yang".[20][3] While the design appears to become a standard ornamental motif in the La Tène culture by the 3rd century BC,[20] found on a wide variety of artefacts,[21] it is not clear what symbolic value, if any, wa attached to it.[22] Unlike the classic Taoist symbol, the "Celtic yin-yang" whorls consistently lack the element of mutual penetration, and the two halves are not always portrayed in different colors.[23] Comparable designs are also found in Etruscan art.[4]