Tail of the Bank

File:The tail of the bank.jpg
A container ship at the Tail of the Bank, heading for the container terminal and about to pass Ironotter point. The tip of the Rosneath peninsula lies to the left, and in line with Ironotter point the wreck of the sugar boat is just visible in the distance.
File:Scotland Greenock bordercropped.jpg
Looking north from Greenock over the Tail of the Bank today, the container cranes of Ocean Terminal can be seen to the right, while on the other side of the Firth of Clyde the waters of the Gare Loch are just visible beyond the tail of the Rosneath peninsula. 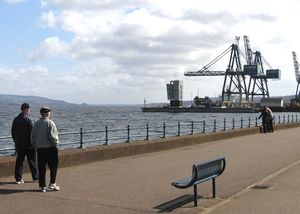 Looking east from Greenock, a small ship unloads at the container cranes of Ocean Terminal. In the distance Dumbarton castle rock marks a point beyond the bank and into the River Clyde.

The Tail of the Bank is the name given to the anchorage in the upper Firth of Clyde immediately north of Greenock and Gourock. This area of the firth gets its name from the sandbar immediately to its east which marks the entrance to the estuary of the River Clyde.

The Tail of the Bank was a significant point of embarkation for many travellers, especially emigrants, to Canada and the United States of America. Steamships of the Cunard Line en route from Liverpool to New York City regularly called at Tail of the Bank to pick up additional passengers.

In the past this area was at times crowded with ships, particularly during the Second World War when the Home Fleet warships of the Royal Navy temporarily left Scapa Flow after the sinking of HMS Royal Oak and were based at the Tail of the Bank. The Clyde Anchorages Emergency Port (CAEP) was improvised there in September 1940 by stevedoring companies evacuated from the Royal Docks of London (closed by the first bombing raids on London). Hundreds of merchant ships of the Atlantic convoys gathered there, as well as ships of the Free French navy. The upper firth was protected by an anti-submarine boom at that time, stretching from Cloch point across the firth to Dunoon. A monument in the form of a Cross of Lorraine combined with an anchor was erected on Lyle Hill overlooking the Tail of the Bank, to commemorate the Free French Naval Forces. It is also associated locally with the Vauquelin class destroyer Maillé Brézé which blew up off Greenock with heavy loss of life on 30 April 1940, before the Free French Naval Forces were established. By 1944 the CAEP became one of the principal destinations for US troops sent to Britain.

In 1974 the "sugar boat" Captayannis was at anchor at the Tail of the Bank when it was driven northwards by a storm and turned on its side on a sandbank midway between Greenock and Helensburgh, forming a large shipwreck which is still visible in the middle of the firth.

Though the sugar trade has been greatly reduced, Greenock's Ocean Terminal facility now handles container freight and regular cruise-liner traffic. The Royal Navy HMNB Clyde bases on Gare Loch and on Loch Long are linked by this area of the Clyde, and the Greenock Great Harbour is one of the three main ports providing marine services support to the navy, formerly under the Royal Maritime Auxiliary Service and currently operated by Serco Denholm.[1] "Admiralty boats" are therefore a common sight, occasionally shepherding large navy ships.