The Tanakh (/tɑːˈnɑːx/;[1] Hebrew: תַּנַ"ךְ‎, pronounced [taˈnaχ] or [təˈnax]; also Tenakh, Tenak, Tanach) or Mikra is the canon of the Hebrew Bible. The traditional Hebrew text is known as the Masoretic Text.

Tanakh is an acronym of the first Hebrew letter of each of the Masoretic Text's three traditional subdivisions: Torah ("Teaching", also known as the Five Books of Moses), Nevi'im ("Prophets") and Ketuvim ("Writings")—hence TaNaKh. The name "Mikra" (מקרא), meaning "that which is read", is another Hebrew word for the Tanakh. The books of the Tanakh were passed on by each generation, and according to rabbinic tradition were accompanied by an oral tradition, called the Oral Torah.

The three-part division reflected in the acronym "Tanakh" is well attested in literature of the Rabbinic period.[2] During that period, however, "Tanakh" was not used. Instead, the proper title was Mikra (or Miqra, מקרא, meaning "reading" or "that which is read") because the biblical texts were read publicly. Mikra continues to be used in Hebrew to this day, alongside Tanakh, to refer to the Hebrew scriptures. In modern spoken Hebrew, they are interchangeable.[3]

There is no scholarly consensus as to when the Hebrew Bible canon was fixed: some scholars argue that it was fixed by the Hasmonean dynasty,[4] while others argue it was not fixed until the second century CE or even later.[5]

According to the Talmud much of the contents of the Tanakh was compiled by the men of the Great Assembly (Anshei K'nesset HaGedolah), a task completed in 450 BCE, and has remained unchanged since that date.[6]

Formal closure of the canon has often been ascribed to Rabbinic Judaism after the destruction of the First Temple in 587 BCE.[citation needed]

The twenty-four book canon is mentioned in the Midrash Koheleth 12:12.[7]

The original writing system of the Hebrew text was an abjad: consonants written with some applied vowel letters ("matres lectionis"). During the early Middle Ages scholars known as the Masoretes created a single formalized system of vocalization. This was chiefly done by Aaron ben Moses ben Asher, in the Tiberias school, based on the oral tradition for reading the Tanakh, hence the name Tiberian vocalization. It also included some innovations of Ben Naftali and the Babylonian exiles.[8] Despite the comparatively late process of codification, some traditional sources and some Orthodox Jews hold the pronunciation and cantillation to derive from the revelation at Sinai, since it is impossible to read the original text without pronunciations and cantillation pauses.[9] The combination of a text (מקרא mikra), pronunciation (ניקוד niqqud) and cantillation (טעמים te`amim) enable the reader to understand both the simple meaning and the nuances in sentence flow of the text.

Books of the Tanakh 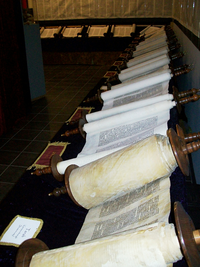 The Tanakh consists of twenty-four books: it counts as one book each Samuel, Kings, Chronicles and Ezra–Nehemiah and counts Trei Asar (תרי עשר, the Twelve Prophets; literally "twelve") as a single book.

The Torah (תּוֹרָה, literally "teaching") consists of five books, commonly referred to as the "Five Books of Moses". Printed versions of the Torah are often called Chamisha Chumshei Torah (חמישה חומשי תורה, literally the "five fifth-sections of the Torah"), and informally a Chumash.

In Hebrew, the five books of the Torah are identified by the first prominent word in each book.

Nevi'im (Hebrew: נְבִיאִים Nəḇî'îm‎, "Prophets") is the second main division of the Tanakh, between the Torah and Ketuvim. It contains two sub-groups, the Former Prophets (Nevi'im Rishonim נביאים ראשונים, the narrative books of Joshua, Judges, Samuel and Kings) and the Latter Prophets (Nevi'im Aharonim נביאים אחרונים, the books of Isaiah, Jeremiah and Ezekiel and the Twelve Minor Prophets). This division includes the books which cover the time from the entrance of the Israelites into the Land of Israel until the Babylonian captivity of Judah (the "period of prophecy"). Their distribution is not chronological, but substantive.

In masoretic manuscripts (and some printed editions), Psalms, Proverbs and Job are presented in a special two-column form emphasizing the parallel stichs in the verses, which are a function of their poetry. Collectively, these three books are known as Sifrei Emet (an acronym of the titles in Hebrew, איוב, משלי, תהלים yields Emet אמ"ת, which is also the Hebrew for "truth").

These three books are also the only ones in Tanakh with a special system of cantillation notes that are designed to emphasize parallel stichs within verses. However, the beginning and end of the book of Job are in the normal prose system.

The five relatively short books of the Song of Songs, the Book of Ruth, the Book of Lamentations, Ecclesiastes and the Book of Esther are collectively known as the Hamesh Megillot (Five Megillot). These are the latest books collected and designated as "authoritative" in the Jewish canon, with the latest parts having dates ranging into the 2nd century BCE. These scrolls are traditionally read over the course of the year in many Jewish communities. The list below presents them in the order they are read in the synagogue on holidays, beginning with the Song of Solomon on Passover.

Besides the three poetic books and the five scrolls, the remaining books in Ketuvim are Daniel, Ezra–Nehemiah and Chronicles. Although there is no formal grouping for these books in the Jewish tradition, they nevertheless share a number of distinguishing characteristics.

The following list presents the books of Ketuvim in the order they appear in most printed editions. It also divides them into three subgroups based on the distinctiveness of Sifrei Emet and Hamesh Megillot.

The Five Megillot (Hamesh Megillot). These books are read aloud in the synagogue on particular occasions, the occasion listed below in parenthesis.

The Jewish textual tradition never finalized the order of the books in Ketuvim. The Babylonian Talmud (Bava Batra 14b — 15a) gives their order as Ruth, Psalms, Job, Proverbs, Ecclesiastes, Song of Solomon, Lamentations of Jeremiah, Daniel, Scroll of Esther, Ezra, Chronicles.[citation needed]

In Tiberian Masoretic codices, including the Aleppo Codex and the Leningrad Codex, and often in old Spanish manuscripts as well, the order is Chronicles, Psalms, Job, Proverbs, Ruth, Song of Solomon, Ecclesiastes, Lamentations of Jeremiah, Esther, Daniel, Ezra.[citation needed]

There are two major approaches towards study of, and commentary on, the Tanakh. In the Jewish community, the classical approach is religious study of the Bible, where it is assumed that the Bible is divinely inspired. Another approach is to study the Bible as a human creation. In this approach, Biblical studies can be considered as a sub-field of religious studies. The later practice, when applied to the Torah, is considered heresy by the Orthodox Jewish community. As such, much modern day Bible commentary written by non-Orthodox authors is considered forbidden by rabbis teaching in Orthodox yeshivas. Some classical rabbinic commentators, such as Abraham Ibn Ezra, Gersonides, and Maimonides, used many elements of contemporary biblical criticism, including their knowledge of history, science, and philology. Their use of historical and scientific analysis of the Bible was considered acceptable by historic Judaism due to the author's faith commitment to the idea that God revealed the Torah to Moses on Mount Sinai.

The Modern Orthodox Jewish community allows for a wider array of biblical criticism to be used for biblical books outside of the Torah, and a few Orthodox commentaries now incorporate many of the techniques previously found in the academic world, e.g. the Da'at Miqra series. Non-Orthodox Jews, including those affiliated with Conservative Judaism and Reform Judaism, accept both traditional and secular approaches to Bible studies. "Jewish commentaries on the Bible", discusses Jewish Tanakh commentaries from the Targums to classical rabbinic literature, the midrash literature, the classical medieval commentators, and modern day commentaries.