The Tank Destruction Badge (German: Sonderabzeichen für das Niederkämpfen von Panzerkampfwagen durch Einzelkämpfer) was a World War II German military decoration awarded to individuals of the Wehrmacht who had single-handedly destroyed an enemy tank using a hand-held weapon. Anti-tank units were ineligible for this award. It was established by Adolf Hitler on 9 March 1942, but could be awarded for actions dating back to 22 June 1941 (the start of Operation Barbarossa, the German invasion of the Soviet Union).

On 18 December 1943, a gold class was introduced that recognised the single-handed destruction of five tanks. A soldier could therefore have four silver badges which would all be replaced by a gold version upon the destruction of a fifth tank (to which separate silver could be added thereafter).

The tank destruction badge featured a blackened 42 mm by 18 mm Panzer IV tank attached to a 88 mm by 33 mm silver ribbon. 2 mm from the top and bottom edges ran a 4 mm black stripe. The tank was attached through the ribbon via three prongs which were then bent over a metal plate, and covered backing cloth or cotton.

The gold award was similar except for a gold bullion wire background with black horizontal stripes. Early awards featured a silver wash to the tank, but later versions show the similar blackened tank of the silver class. 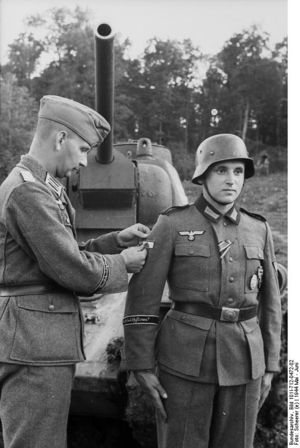