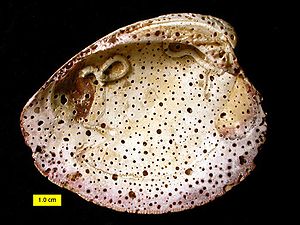 Taphonomy is the study of decaying organisms over time and how they may become fossilized. The term taphonomy (from the Greek taphos, τάφος meaning "burial", and nomos, νόμος meaning "law") was introduced to paleontology in 1940 by Russian scientist Ivan Efremov to describe the study of the transition of remains, parts, or products of organisms, from the biosphere, to the lithosphere, i.e. the creation of fossil assemblages.[1][2]

Taphonomists study such phenomena as biostratinomy, decomposition, diagenesis, and encrustation and bioerosion by sclerobionts.[3] (Sclerobionts are organisms which dwell on hard substrates such as shells or rocks.)

One motivation behind taphonomy is to better understand biases present in the fossil record. Fossils are ubiquitous in sedimentary rocks, yet paleontologists cannot draw the most accurate conclusions about the lives and ecology of the fossilized organisms without knowing about the processes involved in their fossilization. For example, if a fossil assemblage contains more of one type of fossil than another, one can infer either that the organism was present in greater numbers, or that its remains were more resistant to decomposition.

During the late twentieth century, taphonomic data began to be applied to other paleontological subfields such as paleobiology, paleoceanography, ichnology (the study of trace fossils) and biostratigraphy. By coming to understand the oceanographic and ethological implications of observed taphonomic patterns, paleontologists have been able to provide new and meaningful interpretations and correlations that would have otherwise remained obscure in the fossil record. 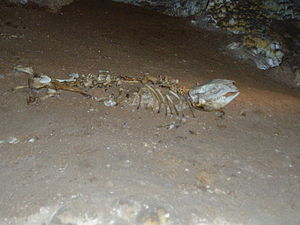 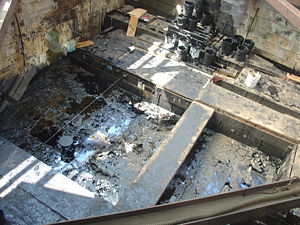 Archaeologists study taphonomic processes in order to determine how plant and animal (including human) remains accumulate and differentially preserve within archaeological sites. This is critical to determining whether these remains are associated with human activity. In addition, taphonomic processes may alter biological remains after they are deposited at a site. Some remains survive better than others over time, and can therefore bias an excavated collection.

Forensic taphonomy is concerned with the study of the decomposition of human remains, particularly in the context of burial sites.

Experimental taphonomy testing usually consists of exposing the remains of organisms to various altering processes, and then examining the effects of the exposure.

Taphonomy has undergone an explosion of interest since the 1980s,[4] with research focusing on certain areas.

It has been suggested that biominerals could be important indicators of extraterrestrial life and thus could play an important role in the search for past or present life on the planet Mars. Furthermore, organic components (biosignatures) that are often associated with biominerals are believed to play crucial roles in both pre-biotic and biotic reactions.[6]

On January 24, 2014, NASA reported that current studies by the Curiosity and Opportunity rovers on Mars will now be searching for evidence of ancient life, including a biosphere based on autotrophic, chemotrophic and/or chemolithoautotrophic microorganisms, as well as ancient water, including fluvio-lacustrine environments (plains related to ancient rivers or lakes) that may have been habitable.[7][8][9][10] The search for evidence of habitability, taphonomy (related to fossils), and organic carbon on the planet Mars is now a primary NASA objective.[7][8]

Taphonomic biases in the fossil record

Because of the very select processes that cause preservation, not all organisms have the same chance of being preserved. Any factor that affects the likelihood that an organism is preserved as a fossil is a potential source of bias. It is thus arguably the most important goal of taphonomy to identify the scope of such biases such that they can be quantified to allow correct interpretations of the relative abundances of organisms that make up a fossil biota.[11] Some of the most common sources of bias are listed below.

Physical attributes of the organism itself

Characteristics of the habitat

Most fossils form in conditions where material is deposited to the bottom of water bodies. Especially shallow sea coasts produce large amounts of fossils, so organisms living in such conditions have a much higher chance of being preserved as fossils than organisms living in non-depositing conditions. In continental environments, fossilization is especially likely in small lakes that gradually fill in with organic and inorganic material and especially in peat-accumulating wetlands. The organisms of such habitats are therefore overrepresented in the fossil record.

Mixing of fossils from different places

A sedimentary deposit may have experienced a mixing of noncontemporaneous remains within single sedimentary units via physical or biological processes; i.e. a deposit could be ripped up and redeposited elsewhere, meaning that a deposit may contain a large amount of fossils from another place (an allochthonous deposit, as opposed to the usual autochthonous). Thus, a question that is often asked of fossil deposits is to what extent does the fossil deposit record the true biota that originally lived there? Many fossils are obviously autochthonous, such as rooted fossils like crinoids, and many fossils are intrisically obviously allocthonous, such as the presence of photoautotrophic plankton in a benthic deposit that must have sunk to be deposited. A fossil deposit may thus become biased towards exotic species (i.e. species not endemic to that area) when the sedimentology is dominated by gravity driven surges, such as mudslides, or may become biased if there is very little endemic organisms to be preserved. This is a particular problem in palynology.

Because population turnover rates of individual taxa are much less than net rates of sediment accumulation, the biological remains of successive, noncontemporaneous populations of organisms may be admixed within a single bed, known as time-averaging. Because of the slow and episodic nature of the geologic record, two apparently contemporaneous fossils may have actually lived centuries, or even millennia, apart. Moreover, the degree of time averaging in an assemblage may vary. The degree varies on many factors, such as tissue type, the habitat, the frequency of burial events and exhumation events, and the depth of bioturbation within the sedimentary column relative to net sediment accumulation rates. Like biases in spatial fidelity, there is a bias towards organisms that can survive reworking events, such as shells. An example of a more ideal deposit with respect to time-averaging bias would be a volcanic ash deposit, which captures an entire biota caught in the wrong place at the wrong time (e.g. the Silurian Herefordshire lagerstätte).

The geological record is very discontinuous, and deposition is episodic at all scales. At the largest scale, a sedimentological high-stand period may mean that no deposition may occur for tens of thousands of years and, in fact, erosion of the deposit may occur. Such a hiatus is called an unconformity. Conversely, a catastrophic event such as a mudslide may overrepresent a time period. At a shorter scale, scouring processes such as the formation of ripples and dunes and the passing of turbidity currents may cause layers to be removed. Thus the fossil record is biased towards periods of greatest sedimentation; periods of time that have less sedimentation are consequently less well represented in the fossil record.

A related problem is the slow changes that occur in the depositional environment of an area; a deposit may experience periods of poor preservation to, for example, a lack of biomineralizing elements. This causes the taphonomic or diagenetic obliteration of fossils, producing gaps and condensation of the record.

Consistency in preservation over geologic time

Major shifts in intrinsic and extrinsic properties of organisms, including morphology and behavior in relation to other organisms or shifts in the global environment, can cause secular or long-term cyclic changes in preservation (megabias).

Much of the incompleteness of the fossil record is due to the fact that only a small amount of rock is ever exposed at the surface of the Earth, and not even most of that has been explored. Our fossil record relies on the small amount of exploration that has been done on this. Unfortunately, paleontologists as humans can be very biased in their methods of collection; a bias that must be identified. Potential sources of bias include,

Main article: Preservation of biopolymers
File:ElrathiakingiUtahWheelerCambrian.jpg
Although chitin exoskeletons of arthropods like this trilobite are subject to decomposition, they often maintain shape during permineralization, especially if they are already somewhat mineralized.

The taphonomic pathways involved in relatively inert substances such as calcite (and to a lesser extent bone) are relatively obvious, as such body parts are stable and change little through time. However, the preservation of "soft tissue" is more interesting, as it requires more peculiar conditions. While usually only biomineralised material survives fossilisation, the preservation of soft tissue is not as rare as sometimes thought.[13]

Both DNA and proteins are unstable, and rarely survive more than hundreds of thousands of years before degrading.[14] Polysaccharides also have low preservation potential, unless they are highly cross-linked;[14] this interconnection is most common in structural tissues, and renders them resistant to chemical decay.[14] Such tissues (resistant chemical in parentheses) include wood (lignin), spores and pollen (sporopollenin), the cuticles of plants (cutan) and animals, the cell walls of algae (algaenan),[14] and potentially the polysaccharide layer of some lichens.{{[15]|date=November 2008}} This interconnectedness makes the chemicals less prone to chemical decay, and also means they are a poorer source of energy so less likely to be digested by scavenging organisms.[14] After being subjected to heat and pressure, these cross-linked organic molecules typically "cook" and become kerogen or short (<17 C atoms) aliphatic/aromatic carbon molecules.[14] Other factors affect the likelihood of preservation; for instance scleritisation renders the jaws of polychaetes more readily preserved than the chemically equivalent but non-sclerotised body cuticle.[14]

It was thought that only tough, cuticle type soft tissue could be preserved by Burgess Shale type preservation,[16] but an increasing number of organisms are being discovered that lack such cuticle, such as the probable chordate Pikaia and the shellless Odontogriphus.[17]

It is a common misconception that anaerobic conditions are necessary for the preservation of soft tissue; indeed much decay is mediated by sulfate reducing bacteria which can only survive in anaerobic conditions.[14] Anoxia does, however, reduce the probability that scavengers will disturb the dead organism, and the activity of other organisms is undoubtedly one of the leading causes of soft-tissue destruction.[14]

Plant cuticle is more prone to preservation if it contains cutan, rather than cutin.[14]

Plants and algae produce the most preservable compounds, which are listed according to their preservation potential by Tegellaar (see reference).[18]

How complete fossils are was once thought to be a proxy for the energy of the environment, with stormier waters leaving less articulated carcasses. However, the dominant force actually seems to be predation, with scavengers more likely than rough waters to break up a fresh carcass before it is buried.[19] Sediments cover smaller fossils faster so they are likelier to be found fully articulated. However, erosion also tends to destroy smaller fossils more easily.[20]