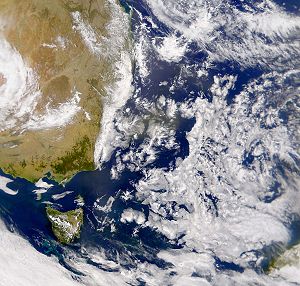 Satellite photo of the Tasman Sea

The Tasman Sea (Māori: Te Tai-o-Rehua[1]) is a marginal sea of the South Pacific Ocean, situated between Australia and New Zealand. It measures about 2,000 kilometres (1,200 mi) across and about 2,800 kilometres (1,700 mi) from north to south. The sea was named after the Dutch explorer Abel Janszoon Tasman, who was the first recorded European to encounter New Zealand and Tasmania. The British explorer Captain James Cook later extensively navigated the Tasman Sea in the 1770s as part of his first voyage of exploration.[2]

The Tasman Sea is informally referred to in both Australian and New Zealand English as The Ditch; for example, crossing the ditch means travelling to Australia from New Zealand, or vice versa. The diminutive term "The Ditch" used for the Tasman Sea is comparable to referring to the North Atlantic Ocean as "The Pond".

The International Hydrographic Organization defines the limits of the Tasman Sea as follows:[3]

On the West. A line from Gabo Island (near Cape Howe, 37°30'S) to the Northeast point of East Sister Island (148°E) thence along the 148th meridian to Flinders Island; beyond this Island a line running to the Eastward of the Vansittart Shoals to [Cape] Barren Island, and from Cape Barren (the Easternmost point of [Cape] Barren Island) to Eddystone Point (41°S) in Tasmania, thence along the East coast to South East Cape, the Southern point of Tasmania.

On the North. The parallel of 30°S from the Australian coast Eastward as far as a line joining the East extremities of Elizabeth Reef and South East Rock (Lua error in Module:Coordinates at line 668: callParserFunction: function "#coordinates" was not found.) then to the Southward along this line to the South East Rock [an outlier of Lord Howe Island].

On the Northeast. From the South East Rock to the North point of Three Kings Islands (Lua error in Module:Coordinates at line 668: callParserFunction: function "#coordinates" was not found.) thence to North Cape in New Zealand.

On the Southeast. A line running from South West Cape, Stewart Island, through The Snares (48°S, 166°30'E) to North West Cape, Auckland Island (Lua error in Module:Coordinates at line 668: callParserFunction: function "#coordinates" was not found.), through this island to its Southern point. 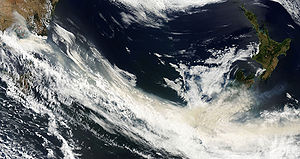 The Tasman Sea's mid-ocean ridge developed between 85 and 55 million years ago as Australia and Zealandia broke apart during the breakup of supercontinent Gondwana. It lies roughly midway between the continental margins of Australia and Zealandia. Much of Zealandia is submerged, so the ridge runs much closer to the Australian coast than New Zealand's.

The Tasman Sea features a number of mid-sea island groups, quite apart from coastal islands located near the Australian and New Zealand mainlands:

Moncrieff and Hood were the first to attempt to a Trans-Tasman crossing by plane in 1928. The first successful flight over the sea was accomplished by Charles Kingsford Smith later that year. The first person to row solo across the sea was Colin Quincey in 1977. The next successful solo crossing was completed by his son, Shaun Quincey in 2010.[4]