Tats use the Tat language, a southwestern Iranian language and a variety of Persian.[4][5][6][7][8] Azerbaijani and Russian are also spoken. Tats are mainly Shia Muslims, with a significant Sunni Muslim minority. 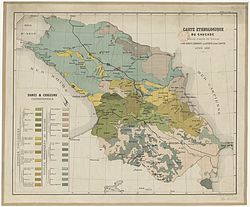 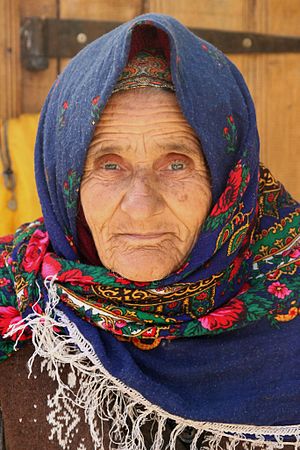 An old Tat woman in Lahic 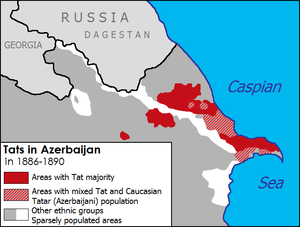 Distribution of the Tats in Azerbaijan (then Baku Governorate, part of the Russian Empire) in 1886–1890.

The earliest mention of Persians in the Caucasus is found in the Greek historian Herodotus' account of the Achaemenid expansion of 558–330 BC, during which they annexed Transcaucasia (South Caucasus) as the X, XI, XVIII and XIX satrapies of their empire.[9]

There is little information about permanent Persian population in South Caucasus since the Achaemenid period. Likely the ancestors of modern Tats settled in South Caucasus when the Sassanid Empire from the 3rd to 7th centuries built cities and founded military garrisons to strengthen their positions in this region.[11]

Khosrau I (531–579) presented the title of regent of Shirvan in eastern South Caucasus to a close relative of his, who later became a progenitor of the first Shirvanshah dynasty (about 510 – 1538).[12]

After the region had been conquered by Arabs (7th and 8th centuries) Islamization of the local population began.

Since the 11th century Oghuz tribes, led by Seljuq dynasts started to penetrate into the region. The gradual formation of the Azeri people started. Apparently in this period the Turkic exonym Tat or Tati, which designated settled farmers, was assigned to the South Caucasian dialect of the Persian language.[13]

The Mongols conquered South Caucasus in the 1230s and the Ilkhanate state was founded in 1250s. Mongol domination lasted until 1360–1370, but that did not stop prominent poets and scientists to emerge.

In the middle of the 18th century Russia started to widen its influence over the South Caucasus. Following the Russo-Persian War (1804–1813) and Russo-Persian War (1826–1828) with their respective treaties, the Treaty of Gulistan and the Treaty of Turkmenchay, all of the South Caucasus and parts of the North Caucasus became a part of the Russian Empire following Qajar Iran's forced cession.[14] After that there is data about quantity and settling of the Tats, collected by tsarist authorities. When the city of Baku was occupied in the beginning of the 19th century during the Russo-Persian War (1804–1813), the whole population of the city (about 8,000 people) were Tats.[15]

According to the 19th-century Golestan-e-Eram, written by Abbasqulu Bakikhanov, Tati was widespread in many areas of Shamakhi, Baku, Darband and Guba:[16]

“There are eight villages in Tabarsaran which are: Jalqan, Rukan, Maqatir, Kamakh, Ridiyan, Homeydi, Mata'i, and Bilhadi. They are in the environs of a city that Anushiravan built near the wall of Darband. Its remains are still there. They speak the Tat language, which is one of the languages of Old Persia. It is clear that they are from the people of Fars and after its destruction they settled in those villages. ..The districts situated between the two cities of Shamakhi and Qodyal, which is now the city of Qobbeh, include Howz, Lahej, and Qoshunlu in Shirvan and Barmak, Sheshpareh and the lower part of Boduq in Qobbeh, and all the country of Baku, except six villages of Turkmen, speak Tat. it becomes apparent from this that they originate from Fars.“

According to the Calendar of the Caucasus of 1894 there were 124,693 Tats in South Caucasus.,[18] but because of the gradual spreading of Azeri Turkic, Tati was passing out of use. During the Soviet period, after the official term Azerbaijani had been introduced in the late 1930s, the ethnic self-consciousness of Tats changed greatly and many started to call themselves Azerbaijani. Whereas in 1926 about 28.443 Tats had been counted,[19] in 1989 only 10,239 people recognized themselves as such.[20]

In 2005 American researchers carried out investigations in several villages of Guba, Devechi, Khizi, Siyazan, Ismailli and Shemakha districts of the Republic of Azerbaijan, indicating 15,553 Tats in these villages.[21]

Although the majority of the Tat population of Azerbaijan and southern Dagestan uses the Turkic exonym Tati or Tat as a self-designation, there remain some local self-designations:[22]

On December 14, 1990, the Azeri cultural and educational society for studying and development of Tati language, history and ethnography was founded by the board of the Ministry of justice of the Azerbaijan SSR. A primer and textbook of the Tat language together with literary and folklore pieces were published.

The Persian settlers of South Caucasus have long interacted with the surrounding ethnic groups, exchanging elements of their cultures. Arts like carpet-making, hand-weaving, metal manufacture, embossing and incrustation are highly developed. The arts of ornamental design and miniature are also very popular.[24]

There is a rich tradition of Tat spoken folk art. Genres of national poetry like ruba’is, ghazals, beits are highly developed. While studying the works of Persian medieval poets of South Caucasus like Khaqani and Nizami some distinctive features of the Tat language have been revealed.[25]

As a result of the long co-existence of Tats and Azerbaijanis many common features in farming, housekeeping and culture have developed. Traditional Tat female clothes are long shirt, wide trousers worn outside, slim line dress, outer unbuttoned dress, headscarf and "Moroccan" stockings. Male clothes are the Circassian coat and high fur-cap.

The traditional one- or two-storeyed houses made of rectangular limestone blocks or river shingles have blank walls facing the street. The roof is flat with an opening for the stone fireplace chimney. The upper store was used for habitation, household quarters (kitchen etc.) were situated on the ground floor. One living room wall has several niches for the storage of clothes, bed linen and sometimes crockery. Rooms were illuminated by lamps or through the opening in the roof. House furniture consisted of low couches, carpets and mattresses. Fireplaces, braziers and ovens were used for heating.

The closed yard has a garden. There is a veranda (ayvan), a paved drain or a small basin (tendir), covered cattle-pan, stable and hen-house.

Originally the Persians were Zoroastrians. After they had been conquered by the Rashidun Caliphate, Islam became widespread. Today the Tats are mainly Shia Muslims, with a sizeable minority of Sunni Muslims and Jews.

The Tat language was widely spread in Eastern South Caucasus. Up to the 20th century it was also used by non-Muslim groups: Mountain Jews, part of the Armenians and the Udins.[26] This has led some to the idea that Muslim Tats, Tat-speaking Mountain Jews and Tat-speaking Christian Armenians are one nation, practicing three different religions.

In the year 1888 A. Sh. Anisimov showed the closeness of language of the Mountain Jews and the Caucasian Persians (Tats). In his work Caucasian Jews-Mountaineers he came to the conclusion that the Mountain Jews were representatives of the Iranian family of the Tats, which had adopted Judaism in Iran and later moved to South Caucasus. The ideas of Anisimov were supported during the Soviet period: the popularization of the idea of the mountain Jews Tat origin started in 30's. Through efforts of several Mountain Jews, closely connected with the regime, the idea of mountain Jews being not really Jews at all but judaized Tats became widely spread. Some Mountain Jews started to register themselves as Tats because of secret pressure from the authorities.

As a result of this the words Tat and Mountain Jew became almost synonymous. The term "Tat" was used in research literature as the second or even first name for Mountain Jews. This caused the whole cultural heritage (literature, theatre, music) created by Mountain Jews during the Soviet period to be attributed to the Tats.

Comparing physic-anthropological characteristics of Tats and Mountain Jews together with information about their languages suggests no signs of ethnic unity between these two nations.

Like most "Jewish" languages, the grammatical structure of Juhuri retains archaic features of the language it is derived from. At the same time all of these languages are satiated with Hebrew words. The loanwords from Aramaic and Hebrew in Juhuri include words not directly connected with Judaic rituals (e.g. zoft resin, nokumi envy, ghuf body, keton linen, etc.) Some syntactical features of Juhuri have are ones typical for Hebrew.

The physical-anthropological types of Caucasian Persians (Tats) and Mountain Jews are also dissimilar.

Speakers of Mountain-Jew dialect and Tati language are representatives of two different nations, each with its own religion, ethnic consciousness, self-designation, way of life, material and spiritual values.[29]

Some 19th- and 20th-century publications describe the citizens of several Tat-speaking village of South Caucasus as Armenian Tats, Armeno-Tats, Christian Tats or Gregorian Tats. It was suggested that a part of the Persians of Eastern South Caucasus had adopted Armenian Christianity, but this did not take into consideration the fact that those citizens identify themselves as Armenians.[30]

In the Sassanid times and later under Muslim dynasties, Christianity wasn’t a privileged religion. Zoroastrianism dominated in the time of Sassanids, and later did Islam. It is argued, that under such circumstances there were no stimuli for the Persian population to reduce their social status by adopting Christianity.

There are traces of an Armenian phonological, lexical, grammatical and calque substratum in the dialect of Tat-speaking Armenians. There are also Armenian affricates (ծ, ց, ձ) in words of Iranian origin, which do not exist in the Tat language. This can only be explained by Armenian influence.

Although they have lost their language these Armenians managed to preserve their national identity. It has a distinct "us versus them" dichotomy, "Hay" (us) to "Muslims" (Tajik, Tats and Azeri together), combined with the idea of themselves as a suffering nation with a tragic historical destiny.

Starting from the Middle Ages, the term Tati was used not only for the Caucasus but also for northern Iran, where it was extended to almost all of the local Iranian languages except Persian and Kurdish.

Currently the term Tati and Tati language is used to refer to a particular group of north-western Iranian dialects (Chali, Danesfani, Hiaraji, Hoznini, Esfarvarini, Takestani, Sagzabadi, Ebrahimabadi, Eshtehardi, Hoini, Kajali, Shahroudi, Harzani) in Iranian Azerbaijan, as well as south of it in the provinces of Qazvin and Zanjan.[31] These dialects have a certain affinity to the Talysh language as one of the descendants of the Old Azari language.[32]

The use of the name Tati to two different Iranian languages erroneously suggests that the Caucasian Tats also live in Iran.