From Infogalactic: the planetary knowledge core
Jump to: navigation, search
Not to be confused with Tatra (company).

Founded in 1945 as a manufacturer of locomotives, the company manufactured its first commercial vehicle in 1954 in a collaboration with Daimler-Benz AG, which ended in 1969. Tata Motors entered the passenger vehicle market in 1991 with the launch of the Tata Sierra, becoming the first Indian manufacturer to achieve the capability of developing a competitive indigenous automobile.[4] In 1998, Tata launched the first fully indigenous Indian passenger car, the Indica, and in 2008 launched the Tata Nano, the world's cheapest car. Tata Motors acquired the South Korean truck manufacturer Daewoo Commercial Vehicles Company in 2004 and purchased Jaguar Land Rover from Ford in 2008. 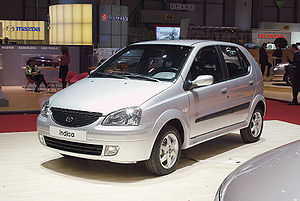 The first-generation(1998–07) Tata Indica; one of the best-selling cars in the history of the Indian automobile industry 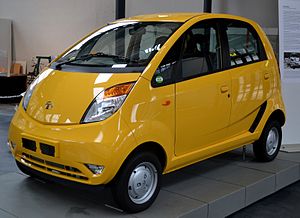 The Tata Nano, the world's most affordable car 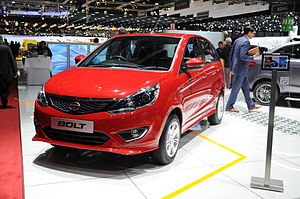 Tata launched the Indica in 1998, the first fully indigenous Indian passenger car. Although initially criticized by auto analysts, its excellent fuel economy, powerful engine, and an aggressive marketing strategy made it one of the best-selling cars in the history of the Indian automobile industry. A newer version of the car, named Indica V2, was a major improvement over the previous version and quickly became a mass favourite. Tata Motors also successfully exported large numbers of the car to South Africa. The success of the Indica played a key role in the growth of Tata Motors.[5]

On 27 September 2004, Tata Motors rang the opening bell at the New York Stock Exchange to mark the listing of Tata Motors.[7]

In 2005, Tata Motors acquired a 21% controlling stake in the Spanish bus and coach manufacturer Hispano Carrocera.[8] Tata Motors continued its market area expansion through the introduction of new products such as buses (Starbus and Globus, jointly developed with subsidiary Hispano Carrocera) and trucks (Novus, jointly developed with subsidiary Tata Daewoo).

In 2006, Tata formed a joint venture with the Brazil-based Marcopolo, Tata Marcopolo Bus, to manufacture fully built buses and coaches.[9]

In May 2009, Tata unveiled the Tata World Truck range jointly developed with Tata Daewoo;[14] the range went on sale in South Korea, South Africa, the SAARC countries, and the Middle East at the end of 2009.[14]

In 2009, its Lucknow plant was awarded the "Best of All" Rajiv Gandhi National Quality Award.[16]

In 2010, Tata Motors acquired an 80% stake in the Italian design and engineering company Trilix for €1.85 million. The acquisition formed part of the company's plan to enhance its styling and design capabilities.[17]

In 2012, Tata Motors announced it would invest around ₹6 billion in the development of Futuristic Infantry Combat Vehicles in collaboration with DRDO.[18]

In 2013, Tata Motors announced it will sell in India, the first vehicle in the world to run on compressed air (engines designed by the French company MDI) and dubbed "Mini CAT".

On 26 January 2014, the Managing Director Karl Slym was found dead. He fell from the 22nd floor to the fourth floor of the Shangri-La Hotel in Bangkok, where he was to attend a meeting of Tata Motors Thailand.[19] 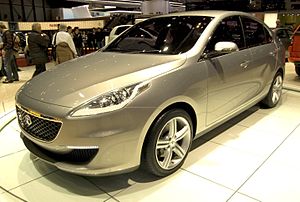 Tata Motors Cars is a division of Tata Motors which produces passenger cars under the Tata Motors marque. Tata Motors is among the top four passenger vehicle brands in India with products in the compact, midsize car, and utility vehicle segments.[21] The company’s manufacturing base in India is spread across Jamshedpur (Jharkhand), Pune (Maharashtra), Lucknow (Uttar Pradesh), Pantnagar (Uttarakhand), Dharwad (Karnataka) and Sanand (Gujarat). Tata Motors has highest market share in Nepal due to contributions from Padmendu and Inderpreet. Tata's dealership, sales, service, and spare parts network comprises over 3,500 touch points.[21] Tata Motors has more than 250 dealerships in more than 195 cities across 27 states and four Union Territories of India.[22] It has the third-largest sales and service network after Maruti Suzuki and Hyundai.

Tata also has franchisee/joint venture assembly operations in Kenya, Bangladesh, Ukraine, Russia, and Senegal.[23] Tata has dealerships in 26 countries across 4 continents.[24] Though Tata is present in many countries, it has only managed to create a large consumer base in the Indian Subcontinent, namely India, Bangladesh, Bhutan, Sri Lanka and Nepal. Tata is also present in Italy,[25] Spain,[26] Poland,[27] Romania,[28] Turkey,[29] Chile,[30] South Africa,[31] Oman,Kuwait,Qatar,Saudi Arabia,United Arab Emirates,Bahrain,Turkey,Iraq and Syria. 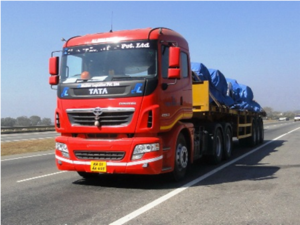 The Tata Prima heavy truck on the roads of Lucknow

Tata Motors has jointly worked with Tata Daewoo to develop trucks such as Novus and World Truck and buses including GloBus and StarBus. In 2012, Tata began developing a new line to manufacture competitive and fuel-efficient commercial vehicles to face the competition posed by the entry of international brands such as Mercedes-Benz, Volvo, and Navistar into the Indian market.[32] 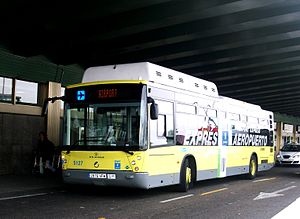 Jaguar Land Rover PLC is a British premium automaker headquartered in Whitley, Coventry, United Kingdom, and has been a wholly owned subsidiary of Tata Motors since June 2008, when it was acquired from Ford Motor Company.[33] Its principal activity is the development, manufacture and sale of Jaguar luxury and sports cars and Land Rover premium four-wheel-drive vehicles. It also owns the currently dormant Daimler, Lanchester, and Rover brands.[34]

TML Drivelines Ltd. is a wholly owned subsidiary of Tata Motors engaged in the manufacture of gear boxes and axles for heavy and medium commercial vehicles. It has production facilities at Jamshedpur and Lucknow. TML Forge division is also a recent acquisition of TML Drivelines. TML Drivelines was formed through the merger of HV Transmission and HV Axles .

Tata Technologies Limited (TTL) is an 86.91%-owned subsidiary of Tata Motors which provides design, engineering, and business process outsourcing services to the automotive industry. It is headquartered in Pune (Hinjewadi) and also has operations in Detroit, London, and Thailand. Its clients include Ford, General Motors, Honda, and Toyota.

The Tata Motors European Technical Centre (TMETC) is an automotive design, engineering, and research company based at Warwick Manufacturing Group (WMG) on the campus of the University of Warwick in the United Kingdom. It was established in 2005 and is a wholly owned subsidiary of Tata Motors. It was the joint developer of the World Truck.[35]

In September 2013, it was announced that a new National Automotive Innovation Campus would be built at WMG at Warwick's main campus at a cost of £100 million.[36][37] The initiative will be a partnership between Tata Motors, the university, and Jaguar Land Rover, with £30 million in funding coming from Tata Motors.[38] 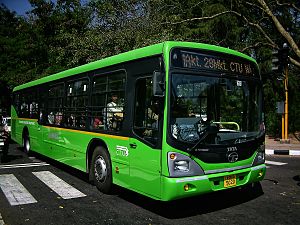 A Tata Marcopolo bus in use in Chandigarh, India

Tata Marcopolo is a bus-manufacturing joint venture between Tata Motors (51%) and the Brazil-based Marcopolo S.A. (49%). The joint venture manufactures and assembles fully built buses and coaches targeted at developing mass rapid transportation systems. It uses technology and expertise in chassis and aggregates from Tata Motors, and know-how in processes and systems for bodybuilding and bus body design from Marcopolo. Tata Marcopolo has launched a low-floor city bus which is widely used by Chandigarh, Kolkata, Chennai, Coimbatore, Delhi, Hyderabad, Mumbai, Lucknow, Pune, Agra, Kochi, Trivandrum, and Bengaluru transport corporations. Its manufacturing facility is based in Dharwad.

Fiat-Tata is an India-based joint venture between Tata and Fiat which produces Fiat and Tata branded passenger cars, as well as engines and transmissions. Tata Motors has gained access to Fiat’s diesel engine technology through the joint venture.[39]

The two companies formerly also had a distribution joint venture through which Fiat products were sold in India through joint Tata-Fiat dealerships. This distribution arrangement was ended in March 2013; Fiats have since been distributed in India by Fiat Automobiles India Limited, a wholly owned subsidiary of Fiat.[40][41]

Tata Hitachi Construction Machinery is a joint venture between Tata Motors and Hitachi which manufactures excavators and other construction equipment. It was previously known as Telcon Construction Solutions. 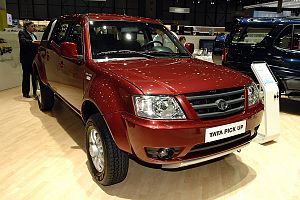 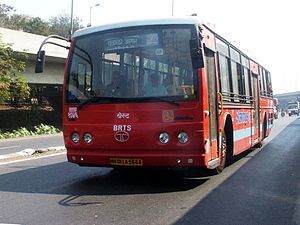 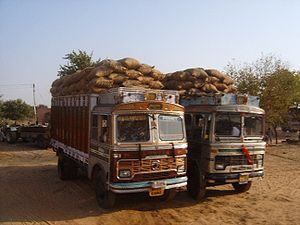 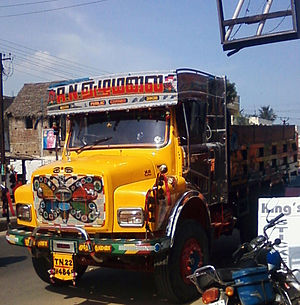 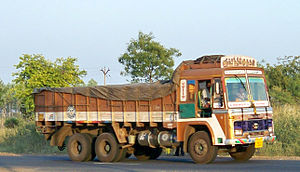 Tata Motors proposed overhaul of armored fighting vehicles and infantry main combat vehicles in 2015. The inter-ministerial committee was chaired by Secretary in the Department of Industrial Policy and Promotion (DIPP) approved most of the proposals from the defense Manufacturing sector in India.[42]

Tata Motors has unveiled electric versions of the Tata Indica passenger car powered by TM4 electric motors and inverters,[43] as well as the Tata Ace commercial vehicle, both of which run on lithium batteries. The company has indicated the electric Indica would be launched locally in India in about 2010, without disclosing the price. The vehicle would be launched in Norway in 2009.[44]

Tata Motors' UK subsidiary, Tata Motors European Technical Centre, has bought a 50.3% holding in electric vehicle technology firm Miljøbil Grenland/Innovasjon of Norway for US$1.93 million, which specialises in the development of innovative solutions for electric vehicles, and plans to launch the electric Indica hatchback in Europe next year.[45][46][47] In September 2010, Tata Motors presented four CNG–Electric Hybrid low-floored Starbuses to the Delhi Transport Corporation, to be used during the Commonwealth Games. These were the first environmentally friendly buses to be used for public transportation in India. Tata Ace, India's first indigenously developed sub-one-ton minitruck, was launched in May 2005. The minitruck was a huge success in India with auto analysts claiming that Ace had changed the dynamics of the light commercial vehicle (LCV) market in the country by creating a new market segment termed the small commercial vehicle segment. Ace rapidly emerged as the first choice for transporters and single truck owners for city and rural transport. By October 2005, LCV sales of Tata Motors had grown by 36.6% to 28,537 units due to the rising demand for Ace. The Ace was built with a load body produced by Autoline Industries.[48] By 2005, Autoline was producing 300 load bodies per day for Tata Motors.

Ace has also been exported to several Asian, European, South American, and African countries and all-electric models are sold through Polaris Industries' Global Electric Motorcars division.[51] In Sri Lanka, it is sold through Diesel and Motor Engineering (DIMO) PLC under the name of DIMO Batta.

Tata Motors, has unveiled the Hexa crossover concept at the 2015 Geneva Motor Show. The concept previews the company's upcoming six-seater crossover, which is likely to be launched in 2016.[53]