From Infogalactic: the planetary knowledge core
Jump to: navigation, search
Not to be confused with Crimean Tatar language or Siberian Tatar language.
"Tatarca" redirects here. For the Romanian village of Tătarca, see Tulucești.

The Tatar language (татар теле, татарча, tatar tele, tatarça, تاتار تيلی or طاطار تيلي[3]) is a Turkic language spoken by Volga Tatars mainly located in modern Tatarstan, Bashkortostan and Nizhny Novgorod Oblast. It should not be confused with the Crimean Tatar language, to which it is remotely related but with which it is not mutually intelligible.

In the 2010 census, 69% of Russian Tatars who responded to the question about language ability claimed a knowledge of the Tatar language.[4] In Tatarstan, 93% of Tatars and 3,6% of Russians did so. In neighbouring Bashkortostan, 67% of Tatars, 27% of Bashkirs, and 1,3% of Russians did.[5] 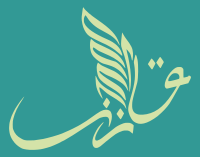 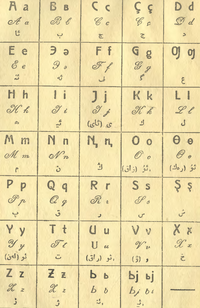 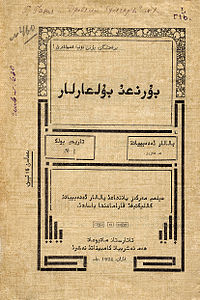 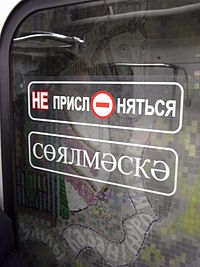 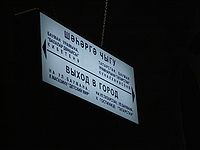 Tatar, along with Russian, is the official language of the Republic of Tatarstan. The official script of Tatar language is based on the Cyrillic script with some additional letters. The Republic of Tatarstan passed a law in 1999, which came into force in 2001, establishing an official Tatar Latin alphabet. A Russian federal law overrode it in 2002, making Cyrillic the sole official script in Tatarstan since. Unofficially, other scripts are used as well, mostly Latin and Arabic. All official sources in Tatarstan must use Cyrillic on their websites and in publishing. In other cases, where Tatar has no official status, the use of a specific alphabet depends on the preference of the author.

The Tatar language was made a de facto official language in Russia in 1917, but only in the Tatar Autonomous Soviet Socialist Republic. Tatar is also considered to have been the official language in the short-lived Idel-Ural State, briefly formed during the Russian Civil War. One should note, however, that Bolshevist Russia did not recognize official languages as such; however, there were a number of languages that could be used in trial in some republics. In the Soviet era, Tatar was such a language[citation needed] in Bashkortostan, Mari El and other regions of the Russian SFSR.

The usage of Tatar declined from the 1930s onwards. In the 1980s, the study and teaching of Tatar in the public education system was limited to rural schools. However, Tatar-speaking pupils had little chance of entering university because higher education was available in Russian almost exclusively.

Tatar is no longer classified as an endangered language,[6] although it is still a low-prestige language. Higher education in Tatar can only be found in Tatarstan, and is restricted to the humanities. In other regions Tatar is primarily a spoken language and the number of speakers as well as their proficiency tends to decrease. Tatar is popular as a written language only in Tatar-speaking areas where schools with Tatar language lessons are situated. On the other hand, Tatar is the only language in use in rural districts of Tatarstan.

There are three main dialects of Tatar: Western (Mişär or Mishar), Middle (Kazan), and Eastern (Siberian). All of these dialects also have subdivisions. Significant contribution to the study of the Tatar language and its dialects, were made by a famous scientist, Doctor of Science in Philology, Professor Gabdulkhay Akhatov, who is considered to be the founder of the modern Tatar dialectological school.

In the Western (Mişär) dialect Ç is pronounced [tʃ] (southern or Lambir Mişärs) and as [ts] (northern Mişärs or Nizhgars). C is pronounced [dʒ]. There are no differences between v and w, q and k, g and ğ in the Mişär dialect. (The Cyrillic alphabet doesn't have special letters for q, ğ and w, so Mişär speakers have no difficulty reading Tatar written in Cyrillic.)

This is the dialect spoken by the Tatar minority of Finland.

In the Minzälä subdialect of the Middle Dialect z is pronounced [ð], as opposed to other dialects where it is silent.

In bilingual cities people often pronounce h as [x], q as [k], ğ as [ɡ], w as [v]. This could be due to Russian influence. Another possibility is that these cities were places where both the western and middle dialects were used.

The Yaña Bistä slang, Yaña Bistä gäbe or simply Gäp was a distinct cryptolect of the Tatar language, spoken in Yaña Bistä (The New Quarter) of Kazan. It has been extinct or near extinct since the 1920s. The vocabulary and grammar of this sociolect differ from those of standard Tatar. The vocabulary includes some words from Central Asian languages. Modern Tatar slang is also sometimes known as gäp. Gäp is phonetically equivalent to the English word gap and is Standard Tatar for a talk.

Siberian Tatars pronounce ç as [ts], c as [j] and sometimes b as [p], d as [t], f as p, j as ch, t as d, z as s and h as k. There are also grammatical differences within the dialect, scattered across Siberia.[7]

Over time, some of these dialects were given distinct names and recognized as separate languages (e.g. the Chulym language) after detailed linguistic study. A brief linguistic analysis shows that many of these dialects exhibit features which are quite different from the Volga–Ural Tatar varieties, and should be classified as Turkic varieties belonging to several sub-groups of the Turkic languages, distinct from Kipchak languages to which Volga–Ural Tatar belongs.

By studying the phonetic peculiarities of the dialect of the local population of Siberia, Professor Gabdulkhay Akhatov first among the scientists discovered in the Speech of the Siberian Tatars is such a thing as 'clip-clop',[8] which in his opinion, was obtained for the Siberian Tatars of Kipchaks.[9] In his classic fundamental research work "Dialect of the West Siberian Tatars" (1963) Gabdulkhay Akhatov wrote about a territorial resettlement of the Tobol-Irtysh Tatars Tyumen and Omsk areas. Subjecting a comprehensive integrated analysis of the phonetic system, the lexical composition and grammatical structure, the scientist concluded that the language of the Siberian Tatars is a separate language, it is divided into three dialects and it is one of the most ancient Turkic languages.[8]

Phonemically, Tatar may be argued to have two vowel heights, high and low. There are two low vowels, front and back, while there are eight high vowels: front and back, round and unround, long and short. However, phonetically, the short high vowels are reduced: they are mid-centralized. They are therefore generally transcribed with mid vowel letters such as e and o: high front i ü, high back ï u, reduced (mid) front e ö, reduced (mid) back ë o, and low ä, a. The high back unrounded vowel ï is only found in Russian loans, though the native diphthong ëy, which only occurs word-finally, has been argued to be phonemically ï.[10] Loaned vowels are considered to be back vowels.

Historically, the Turkic high vowels have become the Tatar reduced series, whereas the Turkic mid vowels have replaced them. Thus Kazakh til 'language' and kün 'day' correspond to Tatar tel and kön, while Kazakh men 'I', qol 'hand', and kök 'sky' are in Tatar min, qul, kük.

Most of these phonemes are common to or have equivalents in all Turkic languages, but the phonemes /v/, /ts/, /h/ and /ʒ/ are only found in loanwords in Literary Tatar. /f/ is also of foreign origin, but is also found in native words,[vague] e.g. yafraq "leaf".[12]

While the consonants [ʒ], [f] and [v] are not native to Tatar, they are well established. However, Tatars usually substitute fricatives for affricates, for example [ɕ] for [tʃ], [ʒ] or [ʑ] for [dʒ], and [s] for [ts]. Nevertheless, literary traditions recommend the pronunciation of affricates in loanwords.

[ʔ] (hamza) is a sound found in Arabic loanwords and Islamic prayers. It is usually pronounced [e] in loanwords.

Palatalisation is not common in Tatar. As a result, speakers have no problem using the Arabic and Jaꞑalif scripts, neither of which has an accepted method for indicating palatalisation.

In general, Russian words with palatalisation have entered into the speech of bilingual Tatars since the 1930s. When writing in the Cyrillic alphabet, Russian words are spelled as they are in Russian. In today's Latin orthography, palatalisation is sometimes represented by an acute diacritic under the vowel.

Some Tatars speak Russian without palatalisation, which is known as a Tatar accent.

Stress is on the final syllable. 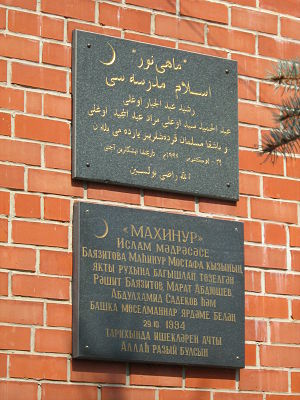 Tatar sign on a madrasah in Nizhny Novgorod, written in both Arabic and Cyrilic Tatar scripts

Unrounded vowels may be pronounced as rounded after o or ö:

Nasals are assimilated to following stops:

Unstressed vowels may be syncopated or reduced:

Vowels may also be elided:

In consonant clusters longer than two phones, ı or e (whichever is dictated by vowel harmony) is inserted into speech as an epenthetic vowel.

Like other Turkic languages, Tatar is an agglutinative language. 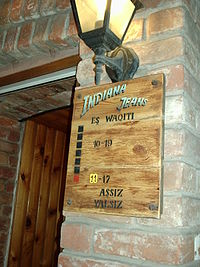 Some guides in Kazan are in Latin script, especially in fashion boutiques

Tatar has been written in a number of different alphabets.

Writing was adopted from the Bolgar language, which used the Orkhon script, before the 920s. Later, the Arabic script was also used, as well as Latin and Cyrillic.

In the Soviet Union after 1928, Tatar was written with a Latin alphabet called Jaꞑalif.

In 1939, in Tatarstan (a republic of Russia where Tatar is most commonly used) and all other parts of the Soviet Union a Cyrillic script was developed and is still used to write Tatar. It is also used in Kazakhstan.

The Republic of Tatarstan passed a law in 1999 that came into force in 2001 establishing an official Tatar Latin alphabet. A Russian federal law overrode it in 2002, making Cyrillic the sole official script in Tatarstan since. In 2004, an attempt to introduce a Latin-based alphabet for Tatar was further abandoned when the Constitutional Court ruled that the federal law of the 15th of November 2002 mandating the use of Cyrillic for the state languages of the republics of the Russian Federation[14] does not contradict the Russian constitution.[15] In accordance with this Constitutional Court ruling, on 28 December 2004, the Tatar Supreme Court overturned the Tatarstani law that made the Latin alphabet official.[16]

In China, Tatars still use the Arabic script.

The literary Tatar language is based on Tatar's Middle dialect and the Old Tatar language (İske Tatar Tele). Both are members of the Kipchak group of Turkic languages, although they are also partly derived from the ancient Volga Bulgar language.

The Tatar language has been strongly influenced by most of the Uralic languages in the Volga River area,[17] as well as Arabic, Persian and Russian languages.[18]