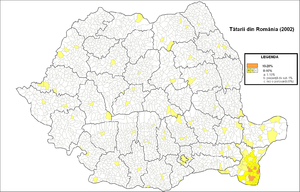 Distribution of Tatars in Romania (2002 census)

Tatars (Romanian: Tătari), a Turkic-speaking ethnic group, were present on the territory of today's Romania since the 13th century. According to the 2011 census, 20,464 people declared their nationality as Tatar, most of them being Crimean Tatars living in Constanţa County. They are the main factor of Islam in Romania.

The Tatars first reached the mouths of the Danube in the mid-13th century at the height of the power of the Golden Horde. In 1241, under the leadership of Kadan, the Tatars crossed the Danube, conquering and devastating[citation needed] the region. The region was probably not under the direct rule of the Horde, but rather, a vassal of the Bakhchisaray Khan.[1]

It is known from Arab sources that at the end of the 13th century and the beginning of the 14th century that descendants of the Nogai Horde settled in Isaccea. Another Arab scholar, Ibn Battuta, who passed through the region in 1330-1331, talks about Baba Saltuk (Babadag) as the southernmost town of the Tatars.[1]

The Golden Horde began to lose its influence after the wars of 1352-1359 and at the time, a Tatar warlord, Demetrius is noted defending the cities of the Mouths of the Danube.

Toward the end of the 16th century, about 30,000 Nogai Tatars from the Budjak were brought to Dobruja.[2]

Crimean Tatars were brought to Dobruja by the Ottomans following the increasing power of the Russians in the region and its annexation of Crimea in 1783. However, after the independence of Romania in 1877-1878, between 80,000 and 100,000 Crimean Tatars moved to Anatolia, a migration which continued afterwards. As such, the number of Tatars in Northern Dobruja decreased from 21% in 1880 to 5.6% in 1912. In 2002, they formed 2.4% of the population.

The Nogai component of the Tatar population are not separately enumerated in Romanian censuses. Most have emigrated to Turkey but it is estimated that a few thousand Nogais still live in Dobruja, notably in the town of Mihail Kogălniceanu (Karamurat) and villages of Lumina (Kocali), Valea Dacilor (Hendekkarakuyusu) and Cobadin (Kubadin).