Tathāgata (Sanskrit: [t̪əˈt̪ʰɑːɡət̪ə]) is a Pali and Sanskrit word; Gautama Buddha uses it when referring to himself in the Pāli Canon. The term is often thought to mean either "one who has thus gone" (tathā-gata) or "one who has thus come" (tathā-āgata). This is interpreted as signifying that the Tathāgata is beyond all coming and going – beyond all transitory phenomena. There are, however, other interpretations and the precise original meaning of the word is not certain.[1]

The Buddha is quoted on numerous occasions in the Pali Canon as referring to himself as the Tathāgata instead of using the pronouns me, I or myself. This may be meant to emphasize by implication that the teaching is uttered by one who has transcended the human condition, one beyond the otherwise endless cycle of rebirth and death, i.e. beyond dukkha.

The term also occurs as a synonym for arhat, identifying one who has attained the ultimate in the holy life.[2]:227 There is even a sense in which such a one is no longer human.[3] "a tathāgata, a superior state of being (uttama-puriso)".[2]:228

In the new religious movement of Falun Gong; the Tathāgata of a realm is the highest level enlightened being that can still manifest on earth to interact with human beings in order to save them. Founder Li Hongzhi claimed that both Jesus and Laozi were Tathāgatas.[4]:13

The word's original significance is not known and there has been speculation about it since at least the time of Buddhaghosa, who gives eight interpretations of the word, each with different etymological support, in his commentary on the Digha Nikaya, the Sumangalailasini:[1]

Monks, in the world with its devas, Mara and Brahma, in this generation with its ascetics and brahmins, devas and humans, whatever is seen, heard, sensed and cognized, attained, searched into, pondered over by the mind—all that is fully understood by the Tathagata. That is why he is called the Tathagata.(Anguttara Nikaya 4:23)[5]

Modern scholarly opinion generally opines that Sanskrit grammar offers at least two possibilities for breaking up the compound word: either tathā and āgata or tathā and gata.[6]:381–382 Tathā means "thus" in Sanskrit and Pali, and Buddhist thought takes this to refer to what is called "reality as-it-is" (yathābhūta). This reality is also referred to as "thusness" or "suchness" (tathatā), indicating simply that it (reality) is what it is.

A buddha or arhat is defined as someone who "knows and sees reality as-it-is" (yathā bhūta ñāna dassana). Gata "gone" is the past passive participle of the verbal root gam "go, travel". Āgata "come" is the past passive participle of the verb meaning "come, arrive". In this interpretation, Tathāgata means literally either “the one who has gone to suchness” or "the one who has arrived at suchness".

Another interpretation, proposed by the scholar Richard Gombrich, is based on the fact that that, when used as a suffix in compounds, -gata often loses its literal meaning and signifies instead "being". Tathāgata would thus mean "one like that", with no motion in either direction.[7]

According to Fyodor Shcherbatskoy, the term has a non-Buddhist origin, and is best understood when compared to its usage in non-Buddhist works such as the Mahabharata.[8] Shcherbatskoy gives the following example from the Mahabharata (Shantiparva, 181.22): "Just as the footprints of birds (flying) in the sky and fish (swimming) in water cannot be seen, Thus (tātha) is going (gati) of those who have realized the Truth."

The nature of a Tathāgata 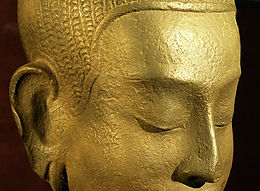 Beyond all coming and going: the Tathagata

A number of passages affirm that a Tathāgata, or arahant, is "immeasurable", "inscrutable", "hard to fathom", and "not apprehended".[2]:227 A tathāgata has abandoned that clinging to the skandhas (personality factors) that render citta (the mind) a bounded, measurable entity, and is instead "freed from being reckoned by" all or any of them, even in life. The aggregates of form, feeling, perception, mental formations, and cognizance that comprise personal identity have been seen to be dukkha (a burden), and an enlightened individual is one with "burden dropped".[2]:229The Buddha explains "that for which a monk has a latent tendency, by that is he reckoned, what he does not have a latent tendency for, by that is he not reckoned.[2]:227, SN 3.3.5 These tendencies are ways in which the mind becomes involved in and clings to conditioned phenomena. Without them, an enlightened person cannot be "reckoned" or "named"; he or she is beyond the range of other beings, and cannot be "found" by them, even by gods, or Mara.[2]:230 In one passage, Sariputta states that the mind of the Buddha cannot be "encompassed" even by him.[6]:416–417

The Buddha and Sariputta, in similar passages, when confronted with speculation as to the status of an arahant after death, bring their interlocutors to admit that they cannot even apprehend an arahant that is alive.[2]:235 As Sariputta puts it, his questioner Yamaka "can't pin down the Tathagata as a truth or reality even in the present life."[9] These passages imply that condition of the arahant, both before and after parinirvana, lies beyond the domain where the descriptive powers of ordinary language are at home; that is, the world of the skandhas and the greed, hatred, and delusion that are "blown out" with nirvana.[10]:226

In the Aggi-Vacchagotta Sutta, an ascetic named Vaccha questions the Buddha on a variety of metaphysical issues. When Vaccha asks about the status of a tathagata after death, the Buddha asks him in which direction a fire goes when it has gone out. Vaccha replies that the question "does not fit the case ... For the fire that depended on fuel ... when that fuel has all gone, and it can get no other, being thus without nutriment, it is said to be extinct." The Buddha then explains: "In exactly the same way ..., all form by which one could predicate the existence of the saint, all that form has been abandoned, uprooted, pulled out of the ground like a palmyra-tree, and become non-existent and not liable to spring up again in the future. The saint ... who has been released from what is styled form is deep, immeasurable, unfathomable, like the mighty ocean."[10]:225 The same is then said of the other aggregates. A variety of similar passages make it clear that the metaphor "gone out, he cannot be defined" (atthangato so na pamanam eti) refers equally to liberation in life.[11]:91, 95 In the Aggi-Vacchagotta Sutta itself, it is clear that the Buddha is the subject of the metaphor, and the Buddha has already "uprooted" or "annihilated" the five aggregates.[11]:95 In Sn 1074, it is stated that the sage cannot be "reckoned" because he is freed from the category "name" or, more generally, concepts. The absence of this precludes the possibility of reckoning or articulating a state of affairs; "name" here refers to the concepts or apperceptions that make propositions possible.[11]:94

A similar response citing immeasurability occurs in another sutta, when the Buddha is asked to pick between two alternatives regarding the arahant after death: annihilation or eternal freedom from illness. The Buddha responds: "There is no measure of him who had achieved the goal. That by which one could define him, that is not for him. When all phenomena (dhamma) are removed, then all means of description are also removed."[10]:225

In the Dhammapada, the actions of an arahant are described as "without trace" (ananuvejja) or "trackless (apada), like the birds in the sky" (ākāse'va sakuntānam gati tesam durannayā ).[12]

Speaking within the context of Mahayana Buddhism (specifically the Perfection of Wisdom sutras), Edward Conze writes that the term 'tathagata' denotes inherent true selfhood within the human being:

Just as tathata designates true reality in general, so the word which developed into "Tathagata" designated the true self, the true reality within man.[13]