The Taurida Governorate (Russian: Таврическая губернiя, modern spelling Таврическая губерния, Ukrainian: Таврiйська губернiя, Crimean Tatar: Tavrida guberniyası) or the Government of Taurida was an historical governorate of the Russian Empire. It included the Crimean Peninsula and the mainland between the lower Dnieper River and the coasts of the Black Sea and Sea of Azov. It was formed after the Taurida Oblast was abolished in 1802 in the course of Paul I's administrative reform of the South-Western territories that had been annexed from the Crimean Khanate. The governorate's centre was the city of Simferopol. The province was named after the ancient Greek name of Crimea--Taurida.

The governorate was divided into eight counties (uyezds) and two city municipalities (gradonachalstvo),
three of them on the mainland:

and five in Crimea:

Before 1820 the governorate consisted of seven counties that included Tmutarakan county on the Taman peninsula across the Strait of Kerch. Later were created Yalta and Berdyansk counties. In 1804-29 there also existed the separate city of Theodosia and in 1914 Yalta county became the autonomous city of Yalta.

In 1917 the governorate was split, with most of its peninsular part forming the Crimean People's Republic, less the city of Sevastopol which remained the main naval base of the Black Sea Fleet of the Russian Republic, while the rest became part of Ukrainian People's Republic.

The governorate bordered Yekaterinoslav Governorate and Kherson Governorate to its north. The Strait of Kerch bordered the Free lands of the Don Cossacks. It has natural borders, being surrounded by the waters of the Black Sea and the Sea of Azov.

The mainland and the peninsular parts of the region differ significantly. The total area of the governorate was 63,538km² of which the mainland portion consisted of 38,405km² and is largely black earth steppe land. The population of the whole region was 1,634,700 in 1906. At that time, the mainland part of the governorate was mostly populated by Ukrainians and Russians but had significant ethnic minorities of Germans, Bulgarians, Armenians and Jews, while major ethnic groups of the Crimean peninsula were Crimean Tatars and Russians with German, Greek, Poles, Armenian, and Karaim minorities. Major urban centres were Simferopol, Sevastopol, Theodosia, Bakhchisaray, and Yalta in Crimea, and Aleshki (now Tsyurupynsk), Berdyansk, and Melitopol on the mainland. 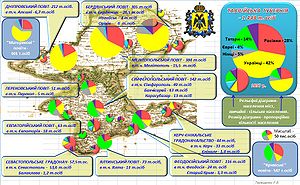 The linguistic composition of the uyezds (povits) of Taurida in 1897. Ukrainians in yellow, Russians in red, Crimean Tatars in green, Germans in gray, Yiddish speakers in blue, and others in purple. (Ukrainian)

In 1783, the Khanate of Crimea was annexed by Catherine the Great’s Russia. Soon after this the Taurida Oblast was established. During the reign of Paul I the oblast was abolished, but soon (in 1802) re-established as a governorate (guberniya). It was a part of the Russian Empire until the Russian Revolution of 1918.

Following the 1917 October Revolution, the ethnic Tatar government proclaimed the Crimean People's Republic on December 13, 1917, which was the first Muslim Democratic state. The Tatar republic covered the peninsular portion of the former governorate, while its northern counties ended up temporarily under jurisdiction of the Yekaterinoslav Governorate. However neither Ukraine nor the Crimea managed to hold on to their territories and were overrun by Bolshevik Red Guards in the winter of 1917-18. Briefly in early 1918 the bolsheviks split the governorate territories between the Taurida Soviet Socialist Republic and the Donetsk-Krivoi Rog Soviet Republic before being overrun by the forces of the Ukrainian People's Republic with military assistance from the German Empire.