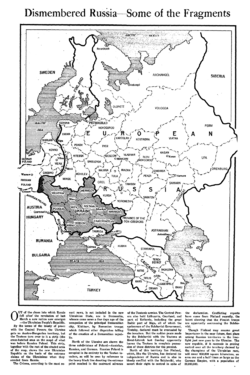 February 1918 article from The New York Times indicating the territorial claims being made by the Ukraine People's Republic. Taurida lies to the south of Ukraine.

Disbandment of the Crimean National Republic

Following the 1917 October Revolution, the ethnic Tatar government proclaimed the Crimean People's Republic on 13 December 1917. In January 1918, however, it was overrun by Bolshevik forces. In Simferopol a guberniya revkom was established which, however, did possess sufficient authority as the military center continued to be located in Sevastopol.

To liquidate this dual authority on February 10–12, 1918 there took place a conference of revkoms at which participated 44 delegates (including 27 Bolsheviks). The conference was later recognized as an extraordinary congress of the Soviets of Workers and Soldiers Deputies. At the meeting it was decided to create 14 commissariats. The congress also confirmed the disbandment of the Council of People's Representatives and Qurultay. The local administration was transformed into a system of soviets replacing the old system of duma and land administration (zemstvo). The 14-member Central Executive Committee was established as the central administration of guberniya which consisted of 10 Bolsheviks; the rest were Left SRs. Jan Miller (Bolshevik) was appointed as chairman of the committee.

The congress, with 23 votes "for" and 20 "against", decided that the administrative center would be in Simferopol rather than Sevastopol, while the military center, which was subordinated to the central executive committee, was left in Sevastopol. The major administrative and political issues were to be decided by laws adopted at the 3rd All-Russian Congress of Soviets. The Taurida congress also approved the adoption of drastic measures for grain procurement allowing requisition and the use of armed force sending bread to industrial areas and the army.

Establishment of the Soviet Autonomous Republic

A few weeks later, on 19 and 21 March, decrees of the Taurida Central Executive Committee (CEC) issued in Simferopol established the Taurida Soviet Socialist Republic on the same territory. Areas of Taurida that lay north of Crimea were also claimed by the Donetsk-Krivoy Rog Soviet Republic and the Ukrainian People's Republic.

With the assistance of the German Empire, the Taurida Soviet Socialist Republic was quickly overrun by forces of the Ukrainian People's Republic during the Crimean Offensive.[4] By the end of April 1918, the majority of the CEC and the Council of People's Commissars, including council leader Anton Slutsky and local Bolshevik chief Jan Tarwacki, were arrested and shot in Alushta by insurgent Crimean Tatars. On 30 April, the Republic was abolished.

Following the invasion, a German-protected Crimean Regional Government was established under Maciej Sulkiewicz and, later, Solomon Krym. After the defeat of the White Movement's Volunteer Army and the reassertion of Soviet control in late 1920, the lands of the former Republic were past to the Crimean Autonomous Soviet Socialist Republic under the Russian SFSR.