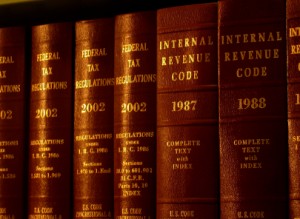 The Internal Revenue Code is the primary statutory basis of federal tax law in the United States. The Code of Federal Regulations is the Treasury Department's regulatory interpretation of the federal tax laws passed by Congress, which carry the weight of law if the interpretation is reasonable. Tax treaties and case law in U.S. Tax Court and other federal courts constitute the remainder of tax law in the United States.

Tax law is an area of legal study dealing with the constitutional, common-law, statutory, tax treaty, and regulatory rules that constitute the law applicable to taxation.

Primary taxation issues facing the governments world over include;

In law schools, "tax law" is a sub-discipline and area of specialist study. Tax law specialists are often employed in consultative roles, and may also be involved in litigation. Many U.S. law schools require about 30 semester credit hours of required courses and approximately 60 hours or more of electives. Law students pick and choose available courses on which to focus before graduation with the J.D. degree in the United States. This freedom allows law students to take many tax courses such as federal taxation, estate and gift tax, and estates and successions before completing the Juris Doctor and taking the bar exam in a particular U.S. state.

There are many Master of Laws (LL.M) programs currently being offered in the United States, Canada, United Kingdom, Australia, Netherlands etc. Many of these programs offer the opportunity to focus on domestic and international taxation. In the United States, most LL.M. programs require that the candidate be a graduate of an American Bar Association-accredited law school. In other countries a graduate law degree is sufficient for admission to LL.M. in Taxation law programs.