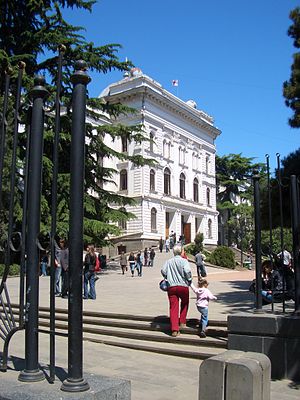 Ivane Javakhishvili Tbilisi State University (Georgian: ივანე ჯავახიშვილის სახელობის თბილისის სახელმწიფო უნივერსიტეტი Ivane Javaxishvilis saxelobis Tbilisis saxelmts'ipo universit'et'i, often shortened to its historical name, Tbilisi State University or TSU), is a university established on 8 February 1918 in Tbilisi, Georgia. Excluding academies and theological seminaries which have intermittently functioned in Georgia for centuries, TSU is the oldest university in Georgia and the Caucasus region. Over 18,000 students are enrolled and the total number of faculty and staff (collaborators) is 5,000.

The Rector of TSU since August 2013 is Vladimer Papava.

TSU has six faculties: Law, Economics and Business, Humanities, Medicine, Social and Political Sciences, Exact and Natural Sciences and the International School of Economics at Tbilisi State University as an autonomous graduate school of economics.

Tbilisi State University was founded in 1918 owing to the leadership of Georgian historian Ivane Javakhishvili and the group of his followers. It was the first and the only educational body of this type in Caucasus Region by that time.[2] The university is housed in the former building of Georgian Nobility Gymnasium constructed by the architect Simon Kldiashvili from 1899 to 1906.

Georgia has a tradition of education, as evidenced by the functioning of the School of Philosophy and Rhetoric of Phazisi in Colchis (4th century); as well as the setting up of cultural-enlightenment centers in Palestine (5th century), Syria (6th century), Greece (10th–15th centuries) and Bulgaria (11th century); Gelati and Iqalto Academies in Georgia (11th–12th centuries); However, as a result of political-economic decrease and at last becoming the colony of Russia, there had been no national higher educational Institution in Georgia for the next few centuries.[3] 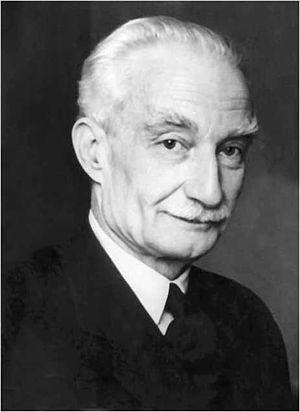 After Georgia became independent and declared itself a national democratic state, one of the first achievements of the Georgian people at the beginning of the 20th century was the foundation of the Georgian National University in Tbilisi. Afterwards, through the Bolshevik and Communist period, in spite of the forced ideology and fierce censorship, Tbilisi State University maintained schools in mathematics, psychology, philosophy, linguistics, and historiography. The foundation of the Academy of Science of Georgia and other higher educational institutions was encouraged by the university.

The university was opened on 26 January 1918, the day of remembrance of the Georgian King David the Builder. A church in the University garden, named after the King, has been functioning since 5 September 1995. In 1989 the university was named after its founder - Ivane Javakhishvili.

Petre Melikishvili, a chemist and professor, was elected as the first rector of the university. At its commencement, the university had one faculty - that of philosophy. Ivane Javakhishvili, a Georgian historian, delivered the first lecture. At the beginning of 1918 the board of professors and lecturers numbered 18, the student body of the university counted 369 students and 89 free listeners.

Today the number of professors involved in tuition and training amounts to 3275, including 55 academicians and corresponding member of the academy, 595 professors and doctors, 1246 assistant professors and candidates of sciences.

Over 35 thousand students are studying at the University and its eight regional branches. Important changes at the university began on 25 April 1994, when the scientific council of the University adopted "The Concepts of University Education"[4], according to which since the year 1994 the university has transferred to the two-stage form of study (the step-by-step rearrangements were launched in 1992).

At the end of the I stage of the reform implemented, at the beginning of 2005, the bodies functioning at TSU were: 22 faculties with 184 chairs, 8 branches with 46 faculties, 3 scientific-research and study-scientific institutes, 81 scientific-research laboratories and centers, 161 study laboratories and rooms, clinical hospitals and diagnostic centers, publishing and editorial houses, the library with 3,650,000 items, 5 dormitories. 95 educational programs were used at the bachelor's course, 194 at master's studies, and 16 at the single-step tuition. Schools that came into being at Tbilisi University were:

Medical education was restored at the university in 1994. Originally the specialty of medicine was opened at the faculty of biology and medicine, and the faculty of medicine became an independent unit in 2000. A center for the Management of Health Care and the Department for Continuous Medical Education were opened, and the board of trustees of medicine and medical information service were founded. The university diagnostic center provides the health care of the professors and lecturers and collaborators of the University. 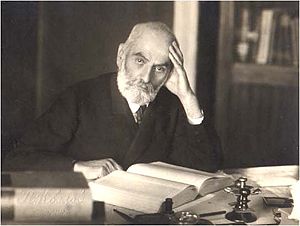 Caucasian studies is one of the major trends of scholarly research. "Caucasica", an international scholarly journal, has been published since 1998.

The Faculty of Humanities of the Ivane Javakhishvili Tbilisi State University is the successor of the Faculty of Philosophy of the first Georgian University established in 1918.

The mission of the faculty is to promote the introduction of modern researches and methodologies, the development of scientific work and research-based educational activities in the fields of humanities.[5]

In May 2005, during the university reforms, six faculties were established out of 22 faculties at Ivane Javakhishvili Tbilisi State University, the Faculty of Political and Social Sciences was one of them. The mission of the faculty is to prepare qualified specialists through education and research and to develop social science.

The faculty has seven educational-scientific directions and offers its students the following Bachelor, Master, and Doctoral programs:

Until 2005 four faculties of the Tbilisi State University (Faculty of Economics, Microeconomics and Management, Marketing and Commerce, International Business) were preparing specialists in the field of economic and business. Establishment of the Faculty of Economics and Business, which is the largest faculty at the Tbilisi State University, is the result of the reforms that have been carried out in Georgian educational system and in TSU in 2005.[7]

The country’s political unification and strengthening, economic growth and development created all[citation needed] necessary grounds for cultural development in Georgia that can perfectly[citation needed] be confirmed by the existence of cultural-educational centers of Gelati and Ikalto.[8]

In 1995, higher medical education was restored at Ivane Javakhishvili Tbilisi State University, first at the Faculty of Biology and Medicine as medical specialization, and in 2000 as an independent faculty.

The faculty runs one-tier academic programs for physicians and dentists. Since 2006, within the framework of TEMPUS project, there has been operating a new bachelor program in occupational therapy in full accordance with the Bologna Process and Tuning Methodology. In clinical and theoretical departments of the faculty, teaching process is conducted in the leading medical institutions. Distinguished students receive professional training in Germany, at the academic study clinics of the Universities of Leipzig and Dresden.

The faculty is running alternative to residency post-diploma academic programs, as well as Master’s (Public Health, Epidemiology and Biostatistics) and Doctoral programs.[9]

TSU has no central campus, its buildings are spread over the city. The oldest building is #1 where the administration of the university is seated. In the yard of the 1st TSU campus lie the founders of Tbilisi State University, whose names imply establishment and development of various scientific schools in Georgia. The Pantheon of Tbilisi State University is one of the special cultural and historical places.[10] 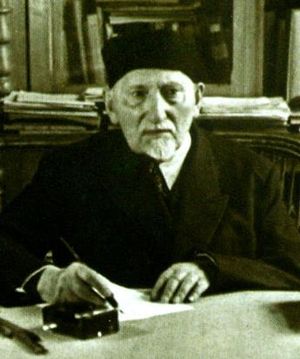 The Board of Representatives is the university representative body, which is elected by the faculties. Senate members are elected separately from the students and the academic personnel in proportion to their number at each structural unit.[5]

The Board of Representatives is elected from within the university on the basis of general, direct and equal elections, by secret ballot. Students comprise one-third of the board. The board includes a representative from the University's library.

The Chancellor is the highest administrative manager at the university in the sphere of financial issues, material and human resources and represents the institution in financial and economic relationships.

There are museums of History, Georgian Emigration, Mineralogy, Geology and Paleontology, Geography, Zoology and Botany.

The five dormitories of Tbilisi State University can accommodate up to 2200 living rooms.

The university has contacts with foreign scientific and educational centres:

Speakers of the Parliament