Tear down this wall!

"Tear down this wall!" is a line from a speech made by US President Ronald Reagan in West Berlin on June 12, 1987, calling for the leader of the Soviet Union, Mikhail Gorbachev, to open up the barrier which had divided West and East Berlin since 1961.[1]

The "tear down this wall" speech was not the first time Reagan had addressed the issue of the Berlin Wall. In a visit to West Berlin in June 1982, he'd stated "I'd like to ask the Soviet leaders one question [...] Why is the wall there?",[2] and in 1986, 25 years after the construction of the wall, in response to West German newspaper Bild-Zeitung asking when he thought the wall could be "torn down", Reagan said, "I call upon those responsible to dismantle it [today]".[3]

On the day before Reagan's 1987 visit, 50,000 people had demonstrated against the presence of the American president in Berlin. During the visit itself, wide swaths of Berlin were shut off hermetically from the event to suppress further anti-Reagan protests. The district of Kreuzberg, in particular, was targeted in this respect, with movement throughout this portion of the city in effect restrained completely (for instance the subway line 1 was shut down).[4]

The speech was also a source of considerable controversy within the Reagan administration itself, with several senior staffers and aides advising against the phrase, saying anything that might cause further East-West tensions or potential embarrassment to Gorbachev, with whom President Reagan had built a good relationship, should be omitted. American officials in West Germany and presidential speechwriters, including Peter Robinson, thought otherwise. Robinson traveled to West Germany to inspect potential speech venues, and gained an overall sense that the majority of West Berliners opposed the wall. Despite getting little support for suggesting Reagan demand the wall's removal, Robinson kept the phrase in the speech text. On May 18, 1987, President Reagan met with his speechwriters and responded to the speech by saying, "I thought it was a good, solid draft." White House Chief of Staff Howard Baker objected, saying it sounded "extreme" and "unpresidential," and Deputy US National Security Advisor Colin Powell agreed. Nevertheless, Reagan liked the passage, saying, "I think we'll leave it in."[5]

Chief speechwriter Anthony R. Dolan gives another account of the line's origins, however, attributing it directly to Reagan. In an article published in The Wall Street Journal in November 2009, Dolan gives a detailed account of how in an Oval Office meeting that was prior to Robinson's draft Reagan came up with the line on his own. He records vivid impressions of his own reaction and Robinson's at the time.[6] This led to a friendly exchange of letters between Robinson and Dolan over their differing accounts, which The Wall Street Journal published.[7][8]

Arriving in Berlin on June 12, 1987, President and Mrs. Reagan were taken to the Reichstag, where they viewed the wall from a balcony.[9] Reagan then made his speech at the Brandenburg Gate at 2:00 pm, in front of two panes of bulletproof glass.[10] Among the spectators were West German president Richard von Weizsäcker, Chancellor Helmut Kohl, and West Berlin mayor Eberhard Diepgen.[9]

We welcome change and openness; for we believe that freedom and security go together, that the advance of human liberty can only strengthen the cause of world peace. There is one sign the Soviets can make that would be unmistakable, that would advance dramatically the cause of freedom and peace. General Secretary Gorbachev, if you seek peace, if you seek prosperity for the Soviet Union and eastern Europe, if you seek liberalization, come here to this gate. Mr. Gorbachev, open this gate. Mr. Gorbachev, tear down this wall![11] 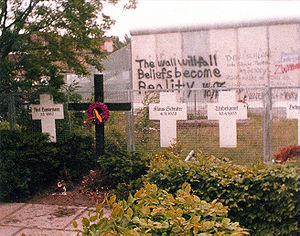 A section of the wall mentioned in the speech.

Another highlight of the speech was Reagan's call to end the arms race with his reference to the Soviets' SS-20 nuclear weapons, and the possibility "not merely of limiting the growth of arms, but of eliminating, for the first time, an entire class of nuclear weapons from the face of the Earth."[10]

Complete speech by at the Brandenburg Gate.
Famous passage begins at 11:10 into this video. 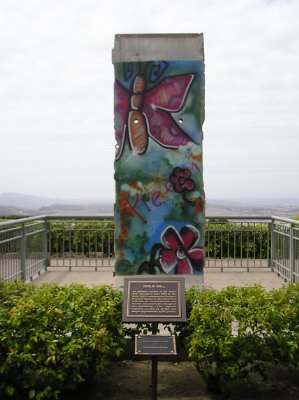 A piece of the Berlin Wall located at the Ronald Reagan Presidential Library in Simi Valley, CA

Former West German Chancellor Helmut Kohl said he would never forget standing near Reagan when he challenged Gorbachev to tear down the Berlin Wall. "He was a stroke of luck for the world, especially for Europe."[14]

In an interview with Reagan himself, he recalls the East German police not allowing people to get near the wall, which prevented the citizens from experiencing the speech at all.[12] The fact that West German police acted in a similar way has however seldom been noted in accounts such as these.[4]

Peter Robinson, the White House wordsmith who drafted the address, said its most famous line was inspired by a conversation with Ingeborg Elz of West Berlin who had remarked in a conversation with him, "If this man Gorbachev is serious with his talk of Glasnost and perestroika he can prove it by getting rid of this wall."[15]

Despite Reagan urging Gorbachev to tear down the Berlin Wall, there are some such as Romesh Ratnesar of Time who commented that there is little evidence that the speech had any impact on the decision to tear down the wall, let alone an impact on the people he addressed.[12] Another critic is Liam Hoare in a 2012 article in The Atlantic, who points to the many reasons for the tendency for American media to focus on the significance of this particular speech, without weighing the complexity of the events as they unfolded in both East and West Germany and the Soviet Union.[16]

John Kornblum, senior US diplomat in Berlin at the time of Reagan's speech, and US Ambassador to Germany from 1997 to 2001, said "[The speech] wasn't really elevated to its current status until 1989, after the wall came down."[9]