Original model of three phases of the process of Technological Change

In its earlier days, technological change was illustrated with the 'Linear Model of Innovation', which has now been largely discarded to be replaced with a model of technological change that involves innovation at all stages of research, development, diffusion and use. When spoken about "modeling technological change" often the process of innovation is meant. This process of continuous improvement is often modeled as a curve depicting decreasing costs over time (for instance fuel cell which have become cheaper every year).

The creation of something new, or a "breakthrough" technology. For example, a personal computer.[citation needed]

The spread of a technology through a society or industry. The diffusion of a technology generally follows an S-shaped curve as early versions of technology are rather unsuccessful, followed by a period of successful innovation with high levels of adoption, and finally a dropping off in adoption as a technology reaches its maximum potential in a market. In the case of a personal computer, it has made way beyond homes and into business settings, such as office workstations and server machines to host websites.

For examples of diffusion of technologies see: Diffusion of innovations#International Institute for Applied Systems Analysis (IIASA)

For assorted diffusion curves such as appliances, household electrification and communications see: Diffusion of innovations#Diffusion data

Technological change as a social process

Underpinning the idea of technological change as a social process is general agreement on the importance of social context and communication. According to this model, technological change is seen as a social process involving producers and adopters and others (such as government) who are profoundly affected by cultural setting, political institutions and marketing strategies.

In free market economies, the maximization of profits is a powerful driver of technological change. Generally, only those technologies are developed and reach the market that promise to maximize profits for the owners of incoming producing capital. Any technologies that fail to meet this criterion even though they may satisfy very important societal needs, are not developed. Therefore, technological change is a social process strongly biased by the financial interests of capital. There are currently no well established democratic processes, such as voting on the social or environmental desirability of a new technology prior to development and marketing, that would allow average citizens to direct the course of technological change.[3]

Emphasis has been on four key elements of the technological change process: (1) an innovative technology (2) communicated through certain channels (3) to members of a social system (4) who adopt it over a period of time. These elements are derived from Everett M. Rogers Diffusion of innovations theory using a communications-type approach.

Communication channels are the means by which a source conveys a message to a receiver. Information may be exchanged through two fundamentally different, yet complementary, channels of communication. Awareness is more often obtained through the mass media, while uncertainty reduction that leads to acceptance mostly results from face-to-face communication.

The social system provides a medium through which and boundaries within which, innovation is adopted. The structure of the social system affects technological change in several ways. Social norms, opinion leaders, change agents, government and the consequences of innovations are all involved. Also involved are cultural setting, nature of political institutions, laws, policies and administrative structures.

Time enters into the acceptance process in many ways. The time dimension relates to the innovativeness of an individual or other adopter, which is the relative earlyness or lateness with which an innovation is adopted. 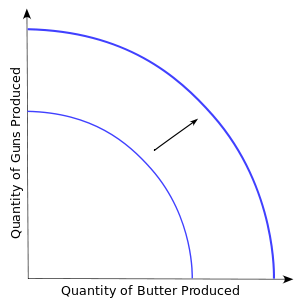 Technological change can cause the production-possibility frontier to shift outward, allowing economic growth.

In economics, technological change is a change in the set of feasible production possibilities.