Technological fixes are inevitable in modern technology. It has been observed that many technologies, although invented and developed to solve certain perceived problems, often create other problems in the process, known as externalities. In other words, there would be modification of the basic hardware, modification of techniques and procedures, or both.[2]

Technological Fix is the idea that all problems can find solutions in better and new technologies; but now is used as a dismissive phrase to describe cheap, quick fixes by using inappropriate technologies; these fixes often create more problems than they solve, or give people a sense that they have solved the problem.[3] 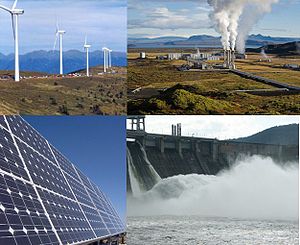 Renewable energy is one primary example of a Technological Fix, as it has been designed to combat the issues with global warming and climate change.

In the contemporary context, technological fix is sometimes used to refer to the idea of using data and intelligent algorithms to supplement and improve human decision making in hope that this would result in ameliorating the bigger problem. One critic, Evgeny Morozov defines this as "Recasting all complex social situations either as neat problems with definite, computable solutions or as transparent and self-evident processes that can be easily optimized--if only the right algorithms are in place."[4] While some criticizes this approach to the issues of today as detrimental to efforts to truly solve these problems, opponents finds merits in such approach to technological improvement of our society as complements to existing activists and policy efforts.[5]

An example of the criticism is how policy makers may be tempted to think that installing smart energy monitors would help people conserve energy better, thus improving global warming, rather than focusing on the arduous process of passing laws to tax carbon, etc. Another example is thinking of obesity as a lifestyle choice of eating high caloric foods and not exercising enough, rather than viewing obesity as more of a social and class problem where individuals are predisposed to eat certain kind of foods (due to the lack of affordable health-supporting food in urban food deserts), to lack optimally evidence-based health behaviors, and lack of proper health care to mitigate behavioral outcomes.[6][7]

The technological fix for Climate Change is an example of the use of technology to restore the environment. This can be seen through various different strategies such as: geo-engineering and renewable energy.

Geo-engineering is referred as "the artificial modification of Earth's climate systems through two primary ideologies, Solar Radiation Management (SRM) and Carbon Dioxide Removal (CDR)"[8] Different schemes, projects and technologies have been designed to tackle the effects of climate change, usually by removing CO2 from the air as seen by Klaus Lackner's invention of a Co2 prototype, or by limiting the amount of sunlight that reaches the Earth's surface, by space mirrors. However, "critics by contrast claim that geoengineering isn't realistic – and may be a distraction from reducing emissions.[9]" It has been argued that geo-engineering is an adaptation to global warming. It allows TNC's, humans and governments to avoid facing the facts that global warming is a crisis that needs to be dealt with head-on by reducing emissions and implementing green technologies, rather than developing ways to control the environment and ultimately allow Greenhouse Gases to continue to be released into the atmosphere.

Renewable Energy is also another example of a technological fix, as technology is being used in attempts to reduce and mitigate the effects of global warming. Renewable Energy refers to technologies that has been designed to be eco-friendly and efficient for the well-being of the Earth. They are generally regarded as infinite energy sources, which means they will never run out, unlike fossil fuels such as oil and coal, which are finite sources of energy. They additionally release no green house gases such as carbon dioxide, which is harmful for the planet as it depletes the ozone layer. Examples of renewable energy can be seen by wind turbines, solar energy such as solar panels and kinetic energy from waves. These energies are regarded as a technological fix as they have been designed and innovated to overcome issues with energy insecurity, as well as to help protect Earth from the harmful emissions released from non-renewable energy sources, and thus overcome global warming. It is also know that such technologies will in turn require their own technological fixes. For example, some types of solar energy have local impacts on ambient temperature, which can be a hazard to birdlife.[10]

It has been made explicit within society that the world's population is rapidly increasing, with the "UNICEF estimating that an average of 353,000 babies are born each day around the world."[11] Therefore, it is expected that the production of food will not be able to progress and develop to keep up with the needs of species. Ester Boserup highlighted in 1965 that when the human population increases and food production decreases, an innovation will take place.[12] This can be demonstrated in the technological development of hydroponics and genetically modified crops. 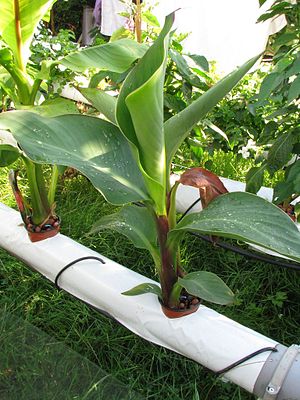 Hydroponics is an example of a technological fix. It demonstrates the ability for humans to recognise a problem within society, such as the lack of food for an increasing population, and therefore attempt to fix this problem with the development of an innovative technology. Hydroponics is a method of food production to increase productivity, in an "artificial environment."[13] The soil is replaced by a mineral solution that is left around the plant roots.[14] Removing the soil allows a greater crop yield, as there is less chance of soil-born diseases, as well as being able to monitor plant growth and mineral concentrations.[13] This innovative technology to yield more food reflects the ability for humans to develop their way out of a problem, portraying a technological fix.

Genetically modified crops (GM) reflect the use of technology to innovate our way out of a problem such as the lack of food to cater for the growing population, demonstrating a technological fix. GM crops can create many advantages, such as higher food fields, added vitamins and increased farm profits.[15] Depending on the modifications, they may also introduce the problem of increasing resistance to pesticides and herbicides, which may inevitably precipitate the need for further fixes in the future.[16]

Golden rice is one example of a technological fix. It demonstrates the ability for humans to develop and innovate themselves out of problems, such as the deficiency of vitamin A in Taiwan and Philippines, in which the World Health Organization reported that about 250 million preschool children are affected by.[17] Through the technological development of GM Crops, scientists were able to develop golden rice that can be grown in these countries with genetically higher levels of vitamin A. This enables healthier and fulfilling lifestyles for these individuals and consequently helps to reduce and fix the deaths caused by the deficiency.

Externalities refer to the unforeseen or unintended consequences of technology. It is evident that everything new and innovative can potentially have negative effects, especially if it is a new area of development. Although technologies are invented and developed to solve certain perceived problems, they often create other problems in the process.

DDT was initially use by the Military in World War II to control a range of different illnesses, varying from Malaria to the bubonic plague and body lice.[18] Due to the efficiency of DDT, it was soon adopted as a farm pesticide to help maximise crop yields to consequently cope with the rising populations food demands post WWII. This pesticide proved to be extremely effective in killing bugs and animals on crops, and was often referred as the "wonder-chemical."[19] However, despite being banned for over 40 years, we are still facing the externalities of this technology.[19] It was found that DDT had major health impacts on both humans and animals. It was found that DDT accumulated within the fatty cells of both humans and animals and therefore highlights that technological fixes have their negatives as well as positives.[19] 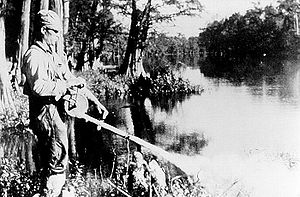 Global warming is a natural pheuomona that causes the Earth to naturally warm to regulate temperatures and ensure plant and human life can be sustained. However it has been found that humans have exemplified this process of heating by the depletion of the ozone layer and the release of Greenhouse Gases through industry, cars and many other methods, causing the earth to heat up to unnatural temperatures. This is causing externalities on the environment, such as melting icecaps, shifting biomes and extinction of many aquatic species, through ocean acidification and changing temperatures.[22]

Automobiles were originally known as the internal combustion engine which revolutionised civilisation and technology within society.[23] However, whilst the technology was new and innovative, helping to connect places through the ability of transport, it was not recognised at the time that burning fossil fuels, such as coal and oil, inside the engines would release pollutants. This is an explicit example of an externality caused by a technological fix, as the problems caused from the development of the technology was not recognised at the time.

High-tech megaprojects are large scale and require huge sums of investment and revenue to be created. Examples of these high technologies are Dams, nuclear power plants, and airports. They usually cause externalities on other factors such as the environment, are highly expensive, and are top-down governmental plans.

The Three Gorges Dam is a hydroelectric dam.

The Three Gorges Dam is an example of a high-tech technological fix. The creation of the multi-purpose navigation hydropower and flood control scheme was designed to fix the issues with flooding whilst providing efficient, clean renewable hydro-electic power in China. The Three Gorges Dam is the world's largest power station in terms of installed capacity (22,500 MW). The dam is the largest operating hydroelectric facility in terms of annual energy generation, generating 83.7 TWh in 2013 and 98.8 TWh in 2014, while the annual energy generation of the Itaipú Dam in Brazil and Paraguay was 98.6 TWh in 2013 and 87.8 in 2014.[24][25][26] It was estimated to have cost over £25 billion.[27] There have been many externalies from this technology, such as the extinction of the Chinese River Dolphin,[27] an increase in pollution, as the river can no longer 'flush' itself, and over 4 million locals being displaced in the area.[27] 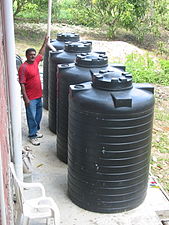 Technology that suits the level of income, skills and needs of the people.[29] Therefore, this factor encompasses both high and low technologies.

An example of this can be seen by developing countries that implement technologies that suit their expertise, such as rain barrels and hand pumps. These technologies are low costing and can be maintained by local skills, making them affordable and efficient.[29] However, to implement rain barrels in a developed country would not be appropriate, as it would not suit the technological advancement apparent in these countries. Therefore, appropriate technological fixes take into consideration the level of development within a country before implementing them.