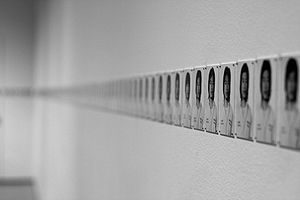 He was one of 15 children from a family in southern Taiwan; his father had five wives. He dropped out from high school and started creating paintings; he went on to create several performance pieces after finishing his three years of compulsory military service in Taiwan. In 1974, he jumped ship to a pier on the Delaware River, near Philadelphia,[3] and made his way to New York City, working as a dishwasher and cleaner during his first four years there.

In 2008, MIT Press published Out of Now, The Lifeworks of Tehching Hsieh[4] by Adrian Heathfield and Hsieh - a monograph with documentation, essays by academics and artists and an extended conversation with him. The year after its release, he told the New York Times, “Because of this book I can die tomorrow.” [3]

In 2009, the Museum of Modern Art (MoMA) (MoMA) in New York exhibited a collection documenting his performance.[5] The Solomon R. Guggenheim Museum in New York also showed one of his works in 2009 as part of its retrospective exhibition, "The Third Mind: American Artists Contemplate Asia: 1860-1989."[3]

He is most known for six durational performance pieces completed between 1978 and 2000.

In this performance, which lasted from 29 September 1978 through 30 September 1979, the artist locked himself in an 11.5-by-9-by-8-foot (3.5 by 2.7 by 2.4 m) wooden cage, furnished only with a wash basin, lights, a pail, and a single bed. During the year, he did not allow himself to talk, to read, to write, or to listen to radio and TV. A lawyer, Robert Projansky, notarized the entire process and made sure the artist never left the cage during that one year. His loftmate came daily to deliver food, remove the artist's waste,[3] and take a single photograph to document the project. In addition, this performance was open to be viewed once or twice a month from 11am to 5pm.[6]

For one year, from 11 April 1980 through 11 April 1981, Hsieh punched a time clock every hour on the hour. Each time he punched the clock, he took a single picture of himself, which together yield a 6-minute movie. He shaved his head before the piece, so his growing hair reflects the passage of time.[7]

Documentation of this piece was exhibited at the Solomon R. Guggenheim Museum in 2009, using film, punch cards and photographs.

This work was the first of Hsieh's ever to be displayed in the UK at the Liverpool Biennial in 2010.[7]

In his third one-year performance piece, from 26 September 1981 through 26 September 1982, Hsieh spent one year outside, not entering buildings or shelter of any sort, including cars, trains, airplanes, boats, or tents. He moved around New York City with a packbag and a sleeping bag.[3]

In this performance, Hsieh and Linda Montano spent one year between 4 July 1983 and 4 July 1984 tied to each other with an 8-foot-long (2.4 m) rope. They had to stay in the same room and were not allowed to touch each other until the end of the one-year period.[8] Both of them shaved their hair in the beginning of the year, and the performance was notarized initially by Paul Grassfield and later by Pauline Oliveros.

For one year, Hsieh did no art, spoke no art, saw no art, read no art, and did not enter any museum or gallery.[3]

At the end, on 1 January 2000 he issued his concluding report, “I kept myself alive. I passed the December 31st, 1999.” The report consisted of cutout letters pasted onto a single sheet of paper.[3]

His pieces are not feats of stamina nor consciously motivated by a desire to suffer (although they have been described as ordeals[9]), but rather are explorations of time and of struggle. According to critic Steve Shaviro[who?], Hsieh's work can be seen as being about imprisonment, solitude, work, time, homelessness, exposure, marriage/human relations, and the way in which art and life are related.[9] The artist himself states his work is about "wasting time and freethinking".[4]

A little after 1999, he declared he was no longer an artist.[3] He has however, continued to give interviews to an art audience. He has expressed that he likes the work of Praxis (Delia Bajo and Brainard Carey).[10]

He currently lives in Clinton Hill, Brooklyn. He has been married three times[3] and is currently working on a coffee shop for his third wife.