The Tejobindu Upanishad (Sanskrit: तेजोबिन्दु उपनिषद्) is a minor Upanishad in the corpus of Upanishadic texts of Hinduism.[2] It is one of the five Bindu Upanishads, all attached to the Atharvaveda,[3] and one of twenty Yoga Upanishads in the four Vedas.[4][5]

The text is notable for its focus on meditation, calling dedication to bookish learning as rubbish, emphasizing practice instead, and presenting the Vedanta doctrine from Yoga perspective.[6]

The Tejobindu is listed at number 37 in the serial order of the Muktika enumerated by Rama to Hanuman in the modern era anthology of 108 Upanishads.[7]

Tejobindu, states Paul Deussen, means "the point representing the power of Brahman", wherein the point is the Anusvara in Om.[8]

Mircea Eliade suggests that Tejobindu Upanishad was possibly composed in the same period as the didactic parts of the Mahabharata, the chief Sannyasa Upanishads and along with other early Yoga Upanishads: Brahmabindu (probably composed about the same time as Maitri Upanishad), Ksurika, Amritabindu, Brahmavidya, Nadabindu, Yogashikha, Dhyanabindu and Yogatattva.[10] Eliade's suggestion places these in the final centuries of BCE or early centuries of the CE. All these, adds Eliade, were likely composed earlier than the ten or eleven later Yoga Upanishads such as the Yoga-kundalini, Varaha and Pashupatabrahma Upanishads.[10]

Gavin Flood dates the Tejobindu text, along with other Yoga Upanishads, to be probably from the 100 BCE to 300 CE period.[1]

This Upanishad is among those which have been differently attached to two Vedas, depending on the region where the manuscript was found. Deussen states, it and all Bindu Upanishads are attached to the Atharvaveda,[3] while Ayyangar states it is attached to the Krishna Yajurveda.[11][12]

Colebrooke's version of 52 Upanishads, popular in north India, lists this Upanishad's text at number 21 along with the other four Bindu Upanishads with similar theme.[13] The Narayana anthology also includes this Upanishad at number 21 in Bibliothica Indica.[14] In the collection of Upanishads under the title "Oupanekhat", put together by Sultan Mohammed Dara Shikhoh in 1656, consisting of a Persian translation of 50 Upanishads and who prefaced it as the best book on religion, the Tejobindu is listed at number 27 and is named Tidj bandeh.[15]

Like almost all other Yoga Upanishads, the text is composed in poetic verse form.[17]

The text exists in multiple versions. The manuscript translated by Deussen is short. It has fourteen verses, describing how difficult meditation is in its first two verses, the requirements for a successful meditative practice in next two, the need for the universal constant Brahman as the radiant focal point of meditation and the nature of Brahman in verses 5 to 11, then closes the text by describing the Yogi who has achieved the state of "liberation, freedom" (moksha) while being alive.[6]

The manuscript translated by TRS Ayyangar of Adyar Library is long, and has six chapters with a cumulative total of 465 verses.[18] The first chapter contains 51 verses, the second has 43 verses, the third with 74 verses, the fourth contains 81 verses, fifth has 105, and the last sixth chapter has 111 verses.[18] Two chapters, in the longer version, are structured as a discourse, with chapters 2 to 4 between Kumara and his father Shiva, and the last two chapters between Nidagha and Ribhu.[19][18] Deussen states that the shorter form may be a trimmed, "enormously corrupt text transmission".[8] 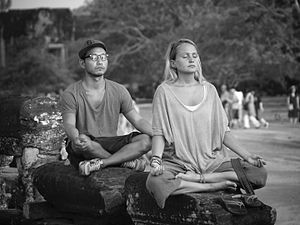 The text does not esteem scriptural studies, and encourages the practice of meditation instead.[20]

The text opens by asserting that Dhyana (meditation) is difficult, and increasingly so as one proceeds from gross, then fine, then superfine states.[8] Even the wise and those who are alone, states the text, find meditation difficult to establish, implement and accomplish.[21]

How to meditate successfully?

For success in Dhyana, asserts the text, one must first conquer anger, greed, lust, attachments, expectations, worries about wife and children.[21][24] Give up sloth and lead a virtuous life.[25] Be temperate in the food you eat, states Tejobindu, abandon your delusions, and crave not.[26] Find a Guru, respect him and strive to learn from him, states the text.[21]

Yamas is restraining organs of perception and action, in and through knowledge.

The Tejobindu briefly defines these fifteen limbs in verses 1.17 to 1.37, without details. The verses 1.38 to 1.51 describe the difficulty in achieving meditation and Samadhi, and ways to overcome these difficulties.[30][31] One must function in the world and be good at what one does, improve upon it, yet avoid longing, state verses 1.44–1.45. Physical yoga alone does not provide the full results, unless introspection and right knowledge purifies the mind, state verses 1.48–1.49 of the longer manuscript.[30] One must abandon anger, selfish bonds to things and people, likes and dislikes to achieve Samadhi, states verse 3 of the shorter version of the manuscript.[24]

The indivisible oneness in the essence of all

Chapter 2 is a discourse from Shiva to his son Kumara on "Individual One Essence". This is Atman (soul, self), states Shiva, it is all existence, the entire world, all knowledge, all space, all time, all Vedas, all introspection, all perceptors, all bodies, all minds, all learning, all that is little, all that is big, and it is Brahman.[32][33] "Individual One Essence" is identical to but called by many names such as Hari and Rudra, and it is without origin, it is gross, subtle and vast in form. "Individual One Essence" is thou, a mystery, that which is permanent, and that which is the knower.[32] It is the father, it is the mother, it is the sutra, it is the Vira, what is within, what is without, the nectar, the home, the sun, the crop field, the tranquility, the patience, the good quality, the Om, the radiance, the true wealth, the Atman.[32][33]

Shiva describes the nature of consciousness in verses 2.24–2.41, and asserts the Vedanta doctrine, "Atman is identical with Brahman" in the final verses of chapter 2.[34][35]

The Tejabindu Upanishad, states Madhavananda, conceives the Supreme Atman dwelling in the heart of man, as the most subtle centre of effulgence, revealed to yogis by super-sensuous meditation.[22] This Atman and its identity with Brahman, the nature of Tat Tvam Asi, is the subject of text's chapter 3, one to be meditated upon, and realised in essence, for the absolute freedom of the soul.[22][23]

The text attributes Shiva explaining the non-dual (Advaita) nature of Atman and Brahman.[36] The verses describe the Atman to be bliss, peace, contentment, consciousness, emotions, delight, satisfaction, absolute, imperishable, bright, Nirguna (without attributes or qualities), without beginning, without end, and repeatedly states "I am Atman", "I am Brahman" and the "Indivisible One Essence".[37][38] The Upanishad also states that the ultimate reality (Brahman) is also Vishnu, same as consciousness.[39] This discussion in Tejobindu Upanishad, a Yoga Upanishad, is same as in the major Vedanta Upanishads.[39]

In the shorter manuscript version, translates Eknath Easwaran, "the Brahman gives himself through his infinite grace" to ones who abandon life's duality.[40] 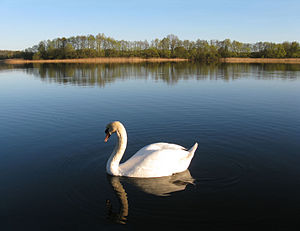 The text describes Jivanmukta as a person who has realized his Self, that he is pure Hamsa (migrating swan).[41]

The chapter 4 of the Upanishad, in a discourse from Shiva to his son Kumara, describes Jivanmukta as follows (abridged):

He is known as a Jivan-mukta who stands alone in Atman, who realizes he is transcendent and beyond transcendent, who understands, "I am pure consciousness, I am the Brahman". He feels that there is Brahman, who is full of exquisite bliss, and that he is He, he is that bliss. His mind is clear, he is devoid of worries, he is beyond egoism, beyond lust, beyond anger, beyond blemish, beyond symbols, beyond his changing body, beyond bondage, beyond reincarnation, beyond precept, beyond religious merit, beyond sin, beyond dualism, beyond three worlds, beyond nearness, beyond distant. He is the one who realizes, "I am the Brahman, I am the Brahman, Consciousness am I, Consciousness am I".

The text asserts that a Jivanmukta has Self-knowledge, knows his Atman is pure Hamsa (migrant swan), he is firmly planted in his soul, in the kingdom of his soul, peaceful, comfortable, kind, happy, living by his own accord.[41][44] He is "the Lord of his own Atman", state verses 4.31–4.32 of the text.[41][44]

The Tejobindu Upanishad, in verses 4.33–4.79 describes Videhamukta, and the difference between Videha mukti and Jivanmukti.[45]

A Videhamukta, states the text, is one who is a dualist and views Brahman as blissful. His "I has been fully roused, and who is excepted by the one Brahman", translates Ayyangar.[46] He sees all in his Atman, but does not have the conviction that I am Brahman.[46] A Videhamukta accepts the other world, and has no fear of the other world.[47] He who does not conceive of "Thou Art That", "this Atman is the Brahman", yet is the Atman that never decays, is consciousness, devoid of light and non-light, is blissful, is Videhamukta states verses 4.68–4.79 of the text.[48][49]

The fifth chapter of the text presents the theory of Atman and of Anatman, as a discourse between Muni Nidagha and the Vedic sage Ribhu.[50]

The verses in chapter 5 repeat the ideas of the previous chapters.[55] It adds in verses 5.89–5.97 that the idea, "I am my body" is false and this definition of self is a reason for bondage, it is a false impression created by mind, then asserts the truth to be that the real, unchanging is the Atman.[56] It is also stated that this chapter is probably a later addition to the original version of the Upanishad.[55]

The nature of Satcitananda

The last chapter continues the discourse attributed to Muni Nidagha and the Vedic age Ribhu. Everything is of sat-cit-ananda, existence-consciousness-bliss asserts Ribhu, it is the imperishable essence.[57] There is, translates TRS Ayyangar of Adyar Library, no "thou", nor "I" nor "other", and all is the absolute Brahman.[57] There are no scriptures, no beginning, no end, no misery, no happiness, no illusions, no such thing as arising out of gods nor evil spirits nor five elements, no permanence, no transience, no worship, no prayer, no oblation, no mantra, no thief, no kindness, nothing except existence-consciousness-bliss.[58]

All is Brahman alone.[59] Time is Brahman, states Ribhu, Art is, happiness is, Self-luminous is, fascination is, tranquility is, virtue is, auspicious is, inauspicious is, pure is, impure is, all the world is of the Brahman.[59] Brahman is Atman, there is no world other than that of the Atman.[60] Know thyself as a form of Brahman.[60]

The one who is liberated, in satcitananda

Greed, delusion, fear, pride, anger, love, sin renouncing,
Not proud of the Brahmin descent, not of the rubbish liberation texts,
Knowing no fear, nor lust, nor pain, nor respect, nor disrespect any more,
Because from all these is free, Brahman, the highest goal of all endeavor.

The Tejobindu Upanishad, states Laurence Rosan, Professor and Departmental Representative in University of Chicago, is a classic in the history of absolute subjective idealism.[62] The Neoplatonism of Proclus, though not identical, parallels the monistic idealism found in Tejobindu Upanishad.[63] The 5th-century CE philosopher Proclus of Greece proposed organic unity of all levels of reality, the integrative immanence of One Reality, and universal love.[64] These ideas independently appear, states Rosan, in Tejobindu Upanishad as well, in the most fully developed, longest litany of singular consciousness.[65]

While the conceptual foundations of Tejobindu are found in ancient major Upanishads such as the Chandogya (~800–600 BCE) and many minor Upanishads such as Atmabodha, Maitreyi and Subala, it is Tejobindu that dwells on the idea extensively, states Rosan, with the phrases Akhanda-eka-rasa (Undivided One Essence, One Reality) and Cit-matra (Consciousness itself).[66] The absolute idealism doctrine in Tejobindu is closely related to the Neoplatonic doctrine of Proclus.{{Sfn|Rosan|1981|p=55}Atmabodha}

The Tejobindu stands as a wonderful monument in the history of subjective monistic idealism, a minority type within idealism in general; the Tejobindu is a victorious, fully accomplished statement.

It is also said that the nondualism concept in Tejobindu is philosophic, and cannot be reduced to phenomenology.[68]

The text has also been important to the historical study of Indian yoga traditions. Klaus Klostermaier, for example, states that Tejobindu Upanishad is a fairly detailed Hindu treatise on Raja Yoga.[69]