Telecommunications in Belarus involves the availability and use of electronic devices and services, such as the telephone, television, radio or computer, for the purpose of communication.

Belarus is a member of the Trans-European Line (TEL), Trans-Asia-Europe Fibre-Optic Line (TAE) and has access to the Trans-Siberia Line (TSL); three fibre-optic segments provide connectivity to Latvia, Poland, Russia, and Ukraine; worldwide service is available to Belarus through this infrastructure; Intelsat, Eutelsat, and Intersputnik earth stations.

In 2006 it was announced that Belarus and Russia completed the second broadband link between the two countries, the Yartsevo-Vitebsk cable. The capacity of this high speed terrestrial link which based on DWDM and STM technology is 400Gbit/s with the ability to upgrade in the future.[2] 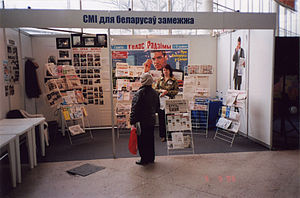 Belarus is switching from an analog to digital broadcast television. The process is due to finish by 2015.[3]

The state telecom monopoly, Beltelecom, holds the exclusive interconnection with Internet providers outside of Belarus. Beltelecom owns all the backbone channels that linked to the Lattelecom, TEO LT, Tata Communications (former Teleglobe), Synterra, Rostelecom, Transtelekom and MTS ISP's. Beltelecom is the only operator licensed to provide commercial VoIP services in Belarus.[4]

Until 2005-2006 broadband access (mostly using ADSL) was available only in a few major cities in Belarus. In Minsk there were a dozen privately owned ISP's and in some larger cities Beltelecom's broadband was available. Outside these cities the only options for Internet access were dial-up from Beltelecom or GPRS/cdma2000 from mobile operators. In 2006 Beltelecom introduced a new trademark, Byfly, for its ADSL access. As of 2008 Byfly was available in all administrative centres of Belarus. Other ISPs are expanding their broadband networks beyond Minsk as well.

The most active Internet users in Belarus belong to the 17–22 age group (38 percent), followed by users in the 23–29 age group. Internet access in Belarus is predominantly urban, with 60 percent of users living in the capital Minsk. The profile of the average Internet user is male, university educated, living in the capital, and working in a state enterprise. The Ministry for Statistics and Analysis estimates that one in four families in Belarus owns a computer at home. The popularity of Internet cafés has fallen in recent years, as most users prefer to access the Internet from home or work. Russian is the most widely used language by Belarusians on the Internet, followed by Belarusian, English, and Polish.[4]

Main articles: Censorship in Belarus and Human rights in Belarus

Many western human rights groups state that civil rights and free expression are severely limited in Belarus, though there are some individuals and groups that refuse to be controlled and some journalists have disappeared.[10]

Because the Belarus government limits freedom of expression, several opposition media outlets are broadcast from nearby countries to help provide Belorussians an alternative points of view. This includes the Polish state-owned Belsat TV station and European Radio for Belarus (Eŭrapéjskaje Rádyjo dla Biełarúsi)[11]

Reporters Without Borders ranked Belarus 157th out of 178 countries in its 2014 Press Freedom Index.[12] By comparison, the same index ranked neighbor Ukraine, 126th and Russia, 148th.

In the 2011 Freedom House Freedom of the Press report, Belarus scored 92 on a scale from 10 (most free) to 99 (least free), because the government allegedly systematically curtails press freedom. This score placed Belarus 9th from the bottom of the 196 countries included in the report and earned the country a "Not Free" status.[13]