Telegraph Agency of the Soviet Union 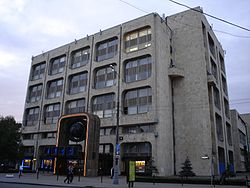 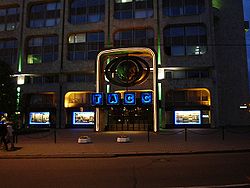 The Telegraph Agency of the Soviet Union (Russian: Телеграфное агентство Советского Союза, Tyelyegrafnoye agyentstvo Sovyetskogo Soyuza; acronym TASS) was the central agency for collection and distribution of internal and international news for all Soviet newspapers, radio and television stations. It had a monopoly on official state information which was delivered in the form of TASS Report (Russian: Сообщение ТАСС, Soobshchyeniye TASS).

It was established on 25 July 1925 by a decree of the Presidium of the Supreme Soviet of the Soviet Union. TASS was created from the Russian Telegraph Agency (ROSTA), the first state news agency in Soviet Russia. The agency was frequently used as a front organization by the Soviet intelligence agencies, such as NKVD and GRU. Many of its employees also served as informants for the NKVD (later, the KGB).

In 1959, Alexander Alexeyev was dispatched to Cuba on a fact-finding mission, ostensibly working for TASS.[1]

In 1961 Ria Novosti was created to supplement TASS, mainly in foreign reporting and human-interest stories.

After 1971, TASS was elevated to the status of State Committee at the Government of the Soviet Union. Tass had affiliates in 14 Union republics (the Russian republic was covered by Tass itself):

Over the history other affiliates existed, e.g., KarelfinTAG (КарелфинТАГ), or Telegraph Agency of the Karelo-Finnish SSR.

TASS had bureaus and reporters in 110 countries, with a daily output equal to 750 newspaper pages, translated into eight (non-Soviet) languages. It had nearly 5000 employees, with about a fifth being journalists.

In 1992, following the dissolution of the Soviet Union, it was inherited by the Information Telegraph Agency of Russia (ITAR-TASS).