From Infogalactic: the planetary knowledge core
Jump to: navigation, search
For other uses, see Telemark (disambiguation).

listen) is a county in Norway, bordering Vestfold, Buskerud, Hordaland, Rogaland and Aust-Agder. The county administration is in Skien. Until 1919 the county was known as Bratsberg amt.

The county is located in southeastern Norway, extending from Hardangervidda to the Skagerrak coast. The coastline extends from Langesundsfjorden to Gjernestangen at the border with Aust-Agder. Telemark has a very broken and heterogeneous landscape, including many hills and valleys.

The international road E18 goes through the southern parts of Telemark, namely Grenland and the municipality of Kragerø. European route 134, another important motorway and the fastest route between Oslo and Bergen, goes through the municipalities of Vinje, Tokke, Kviteseid, Seljord, Hjartdal and Notodden. RV36, stretching from Porsgrunn to Seljord, links the E18 and E134 motorways.

Telemark is well served by railways. The Sørlandsbanen runs through the traditional districts of Vestmar and Midt-Telemark, serving the municipalities of Drangedal, Nome, Bø and Sauherad. Grenland is primarily served by Vestfoldbanen, but also has connections through Bratsbergbanen which runs between Skien and Notodden.

Geiteryggen Airport in Skien offers flights to Bergen and Stavanger.

From Langesund, Kystlink operates ferry services to Sweden and Denmark.

The largest population centres are Skien, Porsgrunn, Notodden, Rjukan and Kragerø. Other important places are Bø, Seljord, Fyresdal and Vinje.

The Norse form of the name was Þelamǫrk. The first element is the genitive plural case of þelir, the name of an old Germanic tribe. The last element is mǫrk "woodland, borderland, march". (See also Denmark, Hedmark and Finnmark.)

Until 1919 the county was called Bratsberg amt. The amt was named after the farm Bratsberg (Norse Brattsberg), since this was the seat of the amtmann ('governor'). The first element is the genitive case of brattr m "steep mountain", the last element is berg n "mountain". (The name is referring to a steep mountainside behind the farm.)

Telemark lent its name to Telemark skiing, a style invented by Sondre Norheim, and the characteristic Telemark landing of ski jumping.

The coat-of-arms is from modern times (1970). It shows an old type of battle axe, significant for the county.

The film The Heroes of Telemark is loosely based on the Norwegian heavy water sabotage, a raid on a heavy water plant at Rjukan during World War II. Ray Mears made a documentary titled The Real Heroes of Telemark as a response to the inaccuracies of the film, giving an account more focused on the outdoor skills that were required for the operation (spending months in the mountains and remote cabins).

An additional district, Vestmar is disputed. Others like Bø, Nome and Sauherad might also be considered as the district of Midt-Telemark. The district borders of this County is highly undefined and disputed. 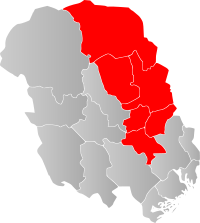 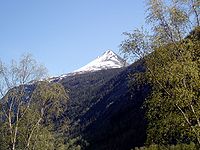 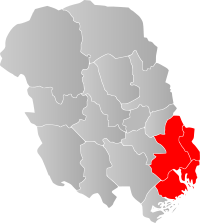 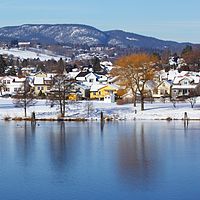 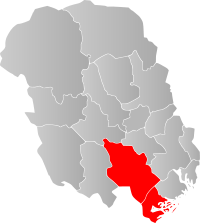