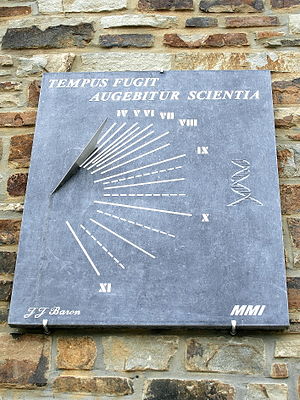 An example of the phrase as a sundial motto in Redu, Belgium.

Tempus fugit is a Latin phrase, usually translated into English as "time flies". The expression comes from line 284 of book 3 of Virgil's Georgics,[1] where it appears as fugit inreparabile tempus: "it escapes, irretrievable time". The phrase is used in both its Latin and English forms as a proverb that "time's a-wasting". Tempus fugit, however, is typically employed as an admonition against sloth and procrastination (cf. carpe diem) rather than a motto in favor of licentiousness (cf. "gather ye rosebuds while ye may"); the English form is often merely descriptive: "time flies like the wind", "time flies when you're having fun".

The phrase's full appearance in the Georgics is:

The phrase is a common motto, particularly on sundials and clocks.